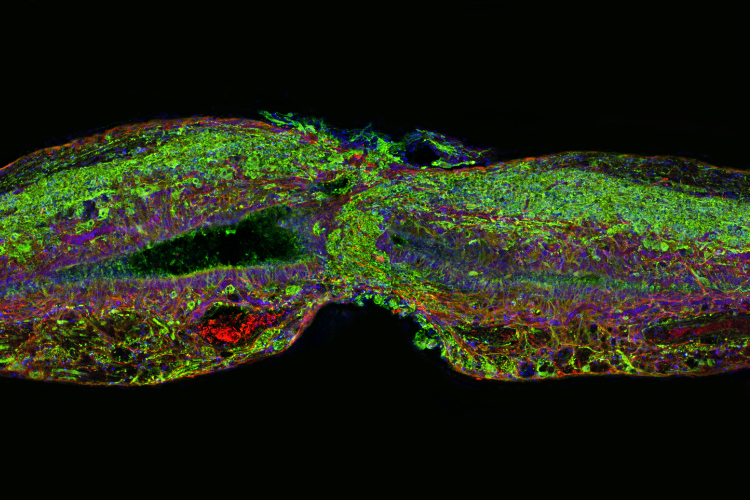 A freshwater zebrafish costs less than two bucks at the pet store, but it can do something priceless: Its spinal cord can heal completely after being severed, a paralyzing and often fatal injury for humans.

While watching these fish repair their own spinal cord injuries, Duke University scientists have found a particular protein important for the process. Their study, published Nov. 4 in the journal Science, could generate new leads into tissue repair in humans.

“This is one of nature’s most remarkable feats of regeneration,” said the study’s senior investigator Kenneth Poss, professor of cell biology and director of the Regeneration Next initiative at Duke. “Given the limited number of successful therapies available today for repairing lost tissues, we need to look to animals like zebrafish for new clues about how to stimulate regeneration.”

When the zebrafish’s severed spinal cord undergoes regeneration, a bridge forms, literally. The first cells extend projections into a distance tens of times their own length and connect across a wide gulf of the injury. Nerve cells follow. By 8 weeks, new nerve tissue has filled the gap and the animals have fully reversed their severe paralysis.

To understand what molecules were potentially responsible for this remarkable process, the scientists conducted a molecular fishing expedition of sorts, searching for all of the genes whose activity abruptly changed after spinal cord injury.

Of dozens of genes strongly activated by injury, seven coded for proteins that are secreted from cells. One of these, called CTGF or connective tissue growth factor, was intriguing because its levels rose in the supporting cells, or glia, that formed the bridge in the first two weeks following injury.

“We were surprised that it was expressed in only a fraction of glial cells after the injury. We thought that these glial cells and this gene must be important,” said lead author Mayssa Mokalled, a postdoctoral fellow in Poss’s group. Indeed, when they tried deleting CTGF genetically, those fish failed to regenerate.

Humans and zebrafish share most protein-coding genes, and CTGF is no exception. The human CTGF protein is nearly 90% similar in its amino acid building blocks to the zebrafish form. When the team added the human version of CTGF to the injury site in fish, it boosted regeneration and the fish swam better by two weeks after the injury.

“The fish go from paralyzed to swimming in the tank. The effect of the protein is striking,” Mokalled said.

CTGF is a large protein, made of four smaller parts, and it has more than one function. But the second half of the CTGF protein seems to be the key to the healing, the group found. That might make it easier to deliver and more specific as a therapy for spinal injuries.

Poss said that unfortunately, CTGF is probably not sufficient on its own for people to regenerate their own spinal cords. Healing is more complex in mammals, in part because scar tissue forms around the injury. Poss’s group expects studies of CTGF to move into mammals like mice.

“Mouse experiments could be key,” Mokalled said. “When do they express CTGF, and in what cell types?”

These experiments may reveal some answers to why zebrafish can regenerate whereas mammals cannot. It may be a matter of how the protein is controlled rather than its make-up, Poss said.

The group also plans to follow up on other proteins secreted after injury that were identified in their initial search, which may provide additional hints into the zebrafish’s secrets of regeneration.

“I don’t think CTGF is the complete answer, but it’s a great thing to have in hand to inform new ways to think about the real challenge of trying to improve regeneration,” Poss said.

Story from Duke University. Original piece written by Kelly Rae Chi. Please note: The content above may have been edited to ensure it is in keeping with Technology Networks’ style and length guidelines.