With their brains, sleep patterns and even eyes still developing, children and adolescents are particularly vulnerable to the sleep-disrupting effects of screen time, according to a sweeping review of the literature published today in the journal Pediatrics.

“The vast majority of studies find that kids and teens who consume more screen-based media are more likely to experience sleep disruption,” says first author Monique LeBourgeois, an associate professor in the Department of Integrative Physiology at CU Boulder. “With this paper, we wanted to go one step further by reviewing the studies that also point to the reasons why digital media adversely affects sleep.”

Of more than five dozen studies looking at youths ages 5 to 17 from around the world, 90 percent have found that more screen time is associated with delayed bedtimes, fewer hours of sleep and poorer sleep quality, the authors report.

Biological, neurological and environmental factors all play a role: Because their eyes are not fully developed, children are more sensitive than adults to the impact of light on the internal body clock, the paper notes.

“Light is our brain clock’s primary timekeeper,” LeBourgeois says, explaining, when light hits the retina in the eye in the evening hours, it produces a cascade of signals to the circadian system to suppress the sleep-promoting hormone melatonin, delaying sleepiness and pushing back the timing of the body clock. “We know younger individuals have larger pupils, and their lenses are more transparent, so their exposure and sensitivity to that light is even greater than in older individuals.”

The authors point to one study that found when adults and school-age children were exposed to the same amount and intensity of light, the children’s melatonin levels fell twice as much. Studies also have shown that short-wavelength “blue light” - ubiquitous in hand-held electronics - is particularly potent at suppressing melatonin.

"Through the young eyes of a child, exposure to a bright blue screen in the hours before bedtime is the perfect storm for both sleep and circadian disruption,” LeBourgeois says.

The “psychological stimulation” of digital media can also play a role in sabotaging sleep, the authors note. “Whether it’s exposure to violent media, playing an exciting game or texting back and forth with friends, all these interactions increase cognitive arousal, which can in turn decrease sleepiness,” LeBourgeois says.

The authors also note children and adolescents who leave a phone or computer on overnight in their bedroom are significantly more likely to have trouble sleeping. More than 75 percent of youths have screen-based media in their bedrooms; 60 percent interact with them in the hour before bedtime; and 45 percent use their phones as an alarm.

“Digital Media and Sleep in Childhood and Adolescence” is one of 22 papers included in todays’ first-ever supplemental issue of Pediatrics to focus on screen time and youth health. In addition to summarizing past research, the papers also set goals for future research, including looking at the impact of screen time on sleep and the internal body clock in toddlers and preschoolers.

“The digital media landscape is evolving so quickly, we need our research to catch up just to answer some basic questions,” says Dr. Pam Hurst-Della Pietra, founder of the nonprofit Children and Screens, which helped orchestrate the issue. 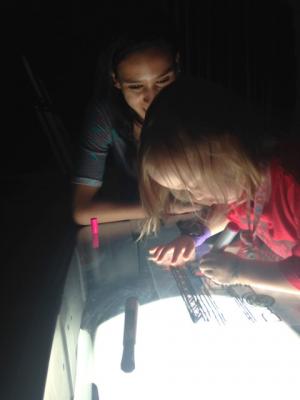 A child plays on a light table at night as part of a study funded by the National Institutes of Health.

A recent report from Commonsense Media showed mobile-media device use has tripled among young children since 2011, with kids under 8 using them 48 minutes per day and many parents incorporating digital media into the bedtime routine as a means of calming children down before sleep.

This summer, LeBourgeois launched a five-year, $2.5 million study funded by the National Institutes of Health, in which her research team - including CU Boulder undergraduates - goes into the homes of volunteer families, exposes children to varying intensities of light and collects saliva samples to measure changes in melatonin levels and the timing of the biological clock.

Ultimately, she believes the study will reveal just how little light it takes to impact sleep and circadian rhythms in young children and lead to science-based guidelines for parents and device-makers.

“The preschool years are a very sensitive time of development, during which, use of digital media is growing more and more pervasive,” she says. “There’s a lot we don’t know about how it may shape sleep and the body clock in little kids.”

This article has been republished from materials provided by the University of Colorado Boulder. Note: material may have been edited for length and content. For further information, please contact the cited source.