Ruairi is a senior science writer at Technology Networks. He holds a Master's degree in clinical neurosciences from the University of Cambridge and has written for Technology Networks since 2018.
Learn about our editorial policies
A bonnethead shark. Credit: Justin Rowland via Flickr under CC BY-NC-SA 2.0

Complete the form below and we will email you a PDF version of "Like Sea Turtles, Sharks Use the Earth’s Magnetic Fields To Navigate "

A new study published in Current Biology suggests that sharks, much like sea turtles, sense the Earth’s magnetic field to navigate around the ocean.

When they aren’t clogging up airtime on the Discovery channel or being unfairly maligned as threats to human life (hippos, who weigh 3,000lbs and can sprint, are much, much deadlier), sharks spend their time swimming in migratory patterns.

These remarkable fish travel thousands of kilometers across the globe, sometimes even returning to particular sites repeatedly, a trait called site fidelity. While these miraculous migrations have been noted by marine biologists for decades, how sharks find their way around a vast, three-dimensional ocean reliably has been a source of mystery for some time.

Dr Bryan Keller, a project leader at Save Our Seas Foundation and lead author of the new study, says that this is due to the difficulty in researching the ocean predators. Conducting a lab experiment on a five-meter-long great white shark, for example, is no easy feat.

To explore site fidelity, Keller, who conducted his research while at Florida State University’s Coastal and Marine Laboratory, caught 20 young bonnethead sharks from around the coast of the Gulf of Florida and tested them in an unusual experimental apparatus. In their lab, Keller’s team built a giant wooden rig, with a blue, three-meter diameter tank mounted in the center where the bonnetheads could swim freely. These bonnetheads were the ideal subject for this research, being both small and capable of site fidelity.

Keller and his team hypothesized that, like other aquatic animals such as turtles, the bonnetheads might navigate themselves  using electrosensitive organs – the fantastically-named ampullae of Lorenzini – to sense the Earth’s magnetic field. To test this, field-altering devices called Merritt coils were housed below the tanks. Keller explained to Technology Networks in an interview how these ingenious machines work: “When supplied with power, the Merritt coils produce a synthetic magnetic field in the center of the coils. By having vertical and horizontal coils, we can create a 3D, synthetic magnetic field. We then used a magnetometer to measure the synthetic magnetic field and then customized the power supplied to the system so that the resulting fields mirrored those of specific locations on Earth.” 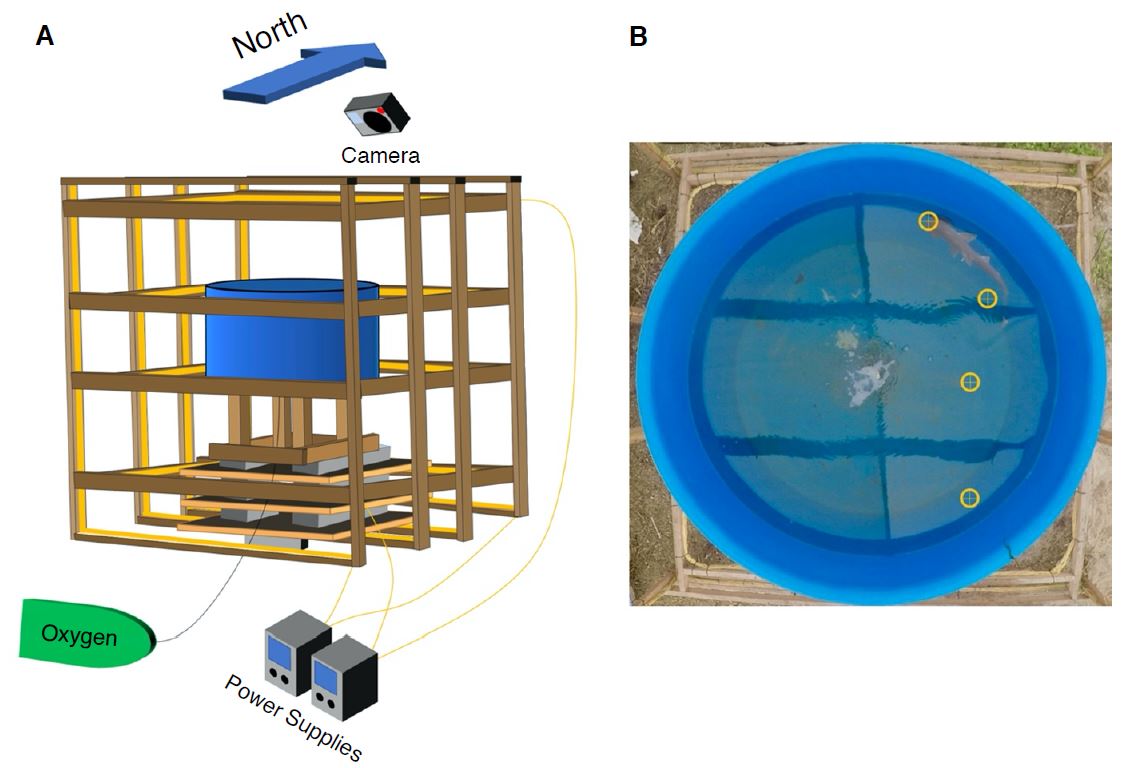 This figure shows how the experiment assessed the ability of bonnethead sharks to use the Earth's magnetic field to navigate. Credit: Keller et al./ Current Biology

In Keller’s lab, the coils were tuned to mimic the electromagnetic field of three specific coordinates: the home estuary – Turkey Point Shoal off the coast of Florida – in which the young sharks were caught, a location 500 kilometers south in the Gulf of Mexico and one 500 kilometers north, which was a point on land, near Athens, TN.

The authors hypothesized that if the sharks used magnetic fields to locate themselves in relation to their capture site, the varied settings of the Merritt coils would prompt them to face in different directions in the tank – pointing south when the field suggested the sharks were at a Northern location, and pointing north at the southern location, with no directional bias predicted at the location corresponding to their home waters.

Their predictions were not entirely borne out. An initial reading showed that when the sharks were exposed to a field that resembled their capture site, they oriented themselves at random around the tank.  When the Merritt coils were modulated to produce a southern magnetic field, the sharks turned to face north, the direction of their capture site. Interestingly,  the land-based coil setting, to the magnetic north of the capture site did not make the sharks turn in any particular direction. While this was not what the team had predicted, the finding did not faze Keller and his colleagues: “The sharks we tested could never experience the magnetic fields that occur at this location, given that it occurs on land. Our finding is possibly due to the fact the sharks had no experience with such a magnetic field.”

Further research will be required to work out whether the bonnetheads have an innate magnetic map, like loggerhead sea turtles, or whether their geomagnetic location is learned. One proposed experiment to address this would be to conduct similar tests on sharks hailing from the Bay of Campeche, near Mexico City. These sharks would never experience magnetic fields more southernly than their birthing location. If the results found in Keller’s current paper were reversed in the Campeche sharks, this would cement the idea that sharks can only rely on magnetic signals that they would naturally experience. 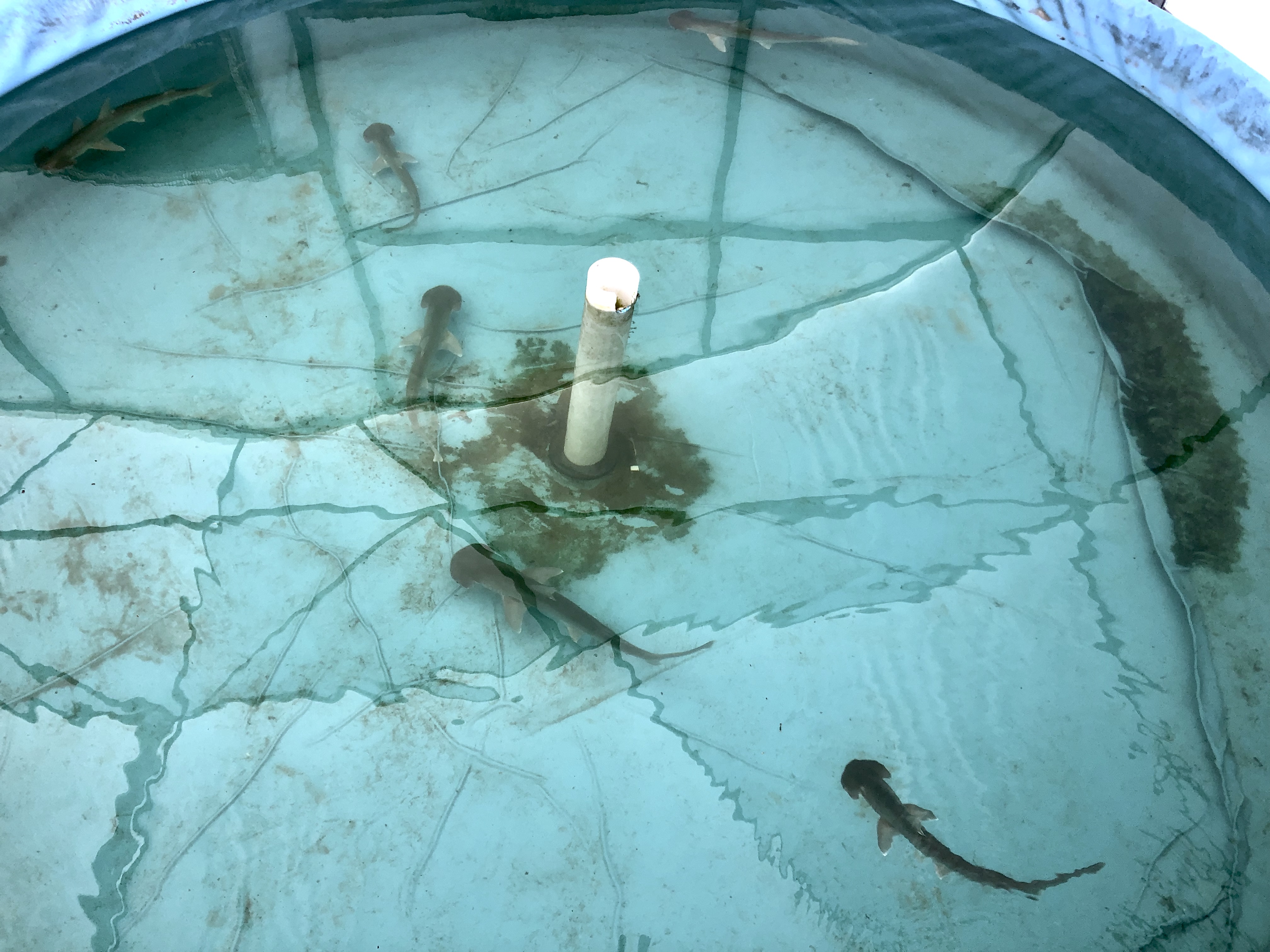 This image shows an overhead shot of bonnetheads in the holding tank. Credit: Bryan Keller

Ultimately, Keller’s new paper adds a significant piece to the still-incomplete puzzle of shark biology. Keller is keen to emphasize that his team’s achievement has built on many years of work: “We would not have been able to carry out our work without the groundwork laid by other researchers throughout the last five decades. This work was truly a collaborative effort, inclusive of those who are not co-authors. Specifically, James Anderson, Kyle Newton and Pete Klimley were all largely influential in assisting in the development of this work, through their own research efforts and direct discussions with me,” he concluded.

Egg on Our Face: Another Asilomar Moment?