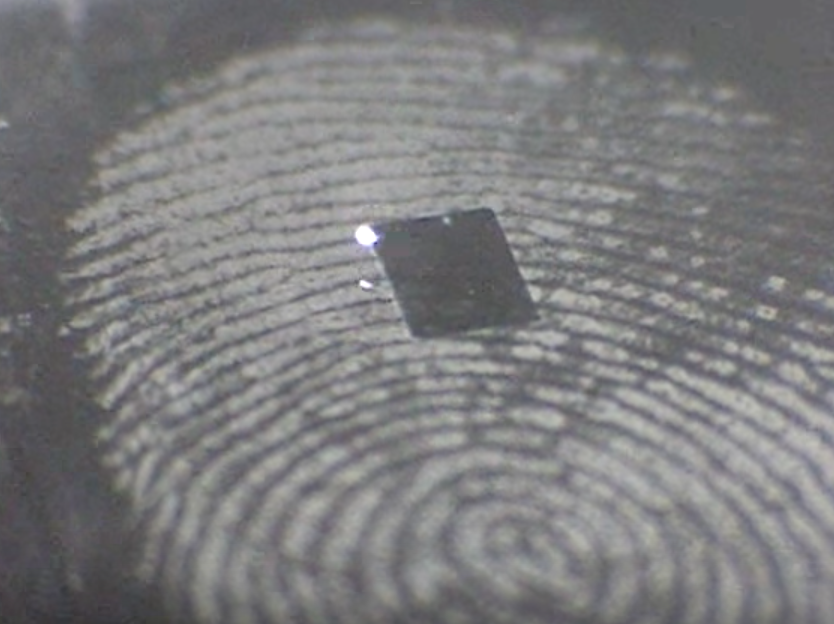 Image: Laser ablation of a fingermark. Screenshot of a video created by LSU researcher Kermit Murray.

Imagine forensics experts at a crime scene, dusting everything down to find any fingermarks a criminal might have left behind. They find one, and a bustle of activity ensues as experts take a picture of the fingermark and send the picture to their colleagues at the station who promptly identify the criminal based on a fingerprint database. 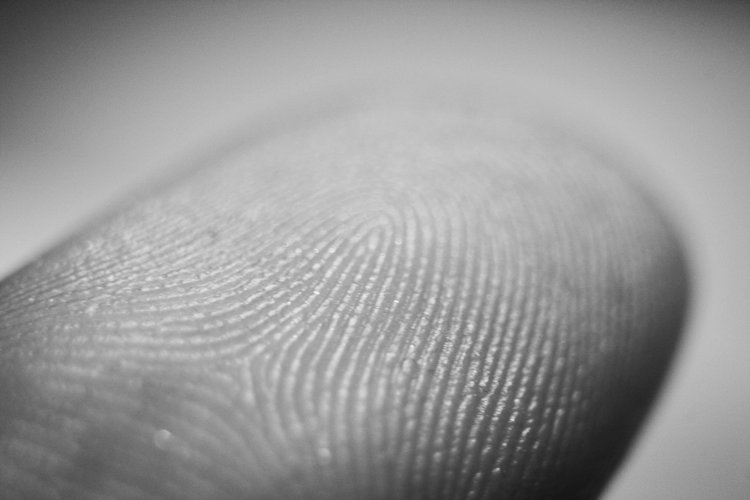 But the picture of the fingermark only tells the forensics experts so much. What if the criminal had someone else’s blood on their fingers? What if they had planted explosives, trace amounts of which might still have been left on their fingers? What if there had been a kidnapping, and experts needed to chemically analyze the fingermark to find clues that could lead them to a particular location? This kind of chemical information is impossible to get from a picture of a fingermark. Forensics experts often use cotton swabs or tape to sample materials from a fingermark and bring those back to the lab, but extracting chemical compounds or molecules from a cotton swab can be extremely challenging, and tape won’t pull all the materials left behind by a fingermark, such as DNA, off of a surface, especially a porous one. 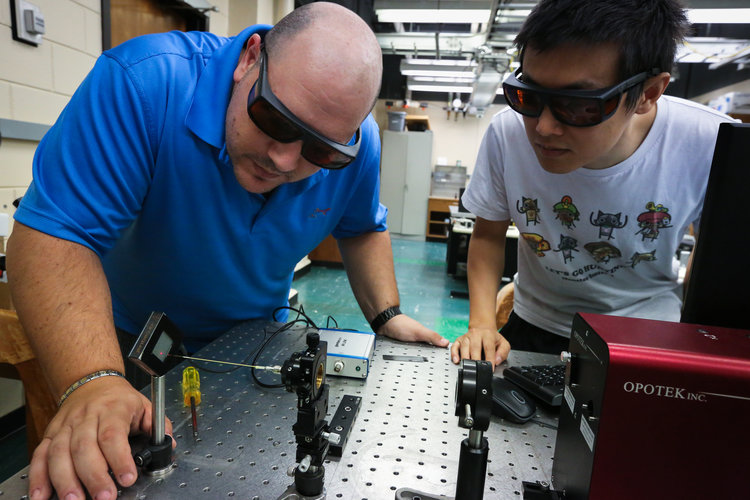 Chemists at LSU may have a solution to this sticky problem. Researchers in the LSU Department of Chemistry have developed an infrared laser ablation and vacuum capture system for fingermark sampling that takes mystery out of the process of identifying the chemical compositions of fingermarks at a crime scene. They’ve described the approach and instrumentation in a new paper published in the Journal of The American Society of Mass Spectrometry.

The idea started when Eden, an undergraduate chemistry student who had interned at the Louisiana State Police Crime Lab during the summer of 2015, approached Murray and Fabrizio with the idea of using their laser lab’s equipment to detect substances from fingermarks.

“I've always had a great interest in forensic science and I wanted my undergraduate research to reflect that,” Eden said. During her internship at the LSP Crime Lab, Eden started brainstorming ways that forensic experts could detect chemical substances from fingermarks. “The most challenging part was trying to determine a method of collection that lost the least amount of sample and wouldn't destroy the surface it was on.”

Fortunately, the Murray lab has extensive experience using lasers to ablate or remove tiny layers from various tissues for bioanalysis.

“We realized that if our techniques work for biomolecules as fragile as DNA and RNA, it should work with almost anything,” Fabrizio said. “We can capture almost anything that is on a surface. In this case, it just happened to be fingerprints.”

Together, Eden, Fabrizio, Fan and Murray came up with the idea to use the lasers in their lab to ablate fingermark materials from a surface, suck them into a filter, and then analyze them using spectrometry techniques. The technique could be used to capture and analyze a variety of molecules contained in a fingermark, including lipids, proteins, genetic material, or even trace amounts of explosives. 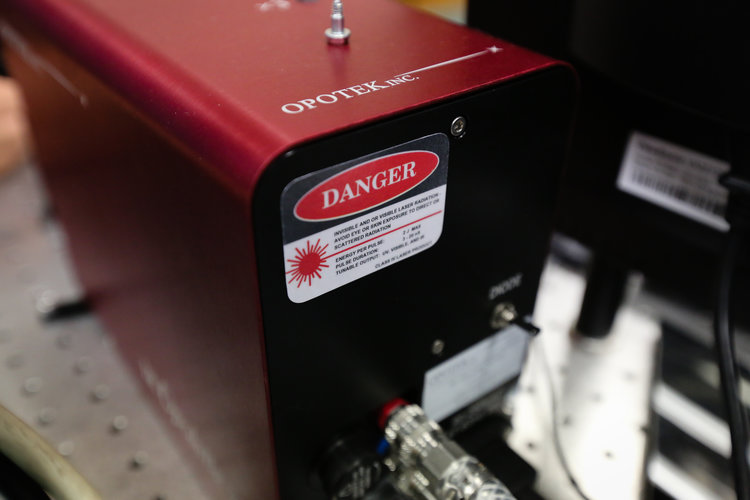 Running with the idea, Murray’s lab received a grant from the LSU LIFT2 program to pursue research related to laser ablation and analysis of fingerprints and the creation of a portable laser capture system for forensic applications. Based on the project, the team is also developing a patent and collaborating with multiple companies and law enforcement offices to develop better techniques for analyzing the chemical signatures of fingerprints at crime scenes.

While the approach can be used for traditional fingerprint analysis, its real power is in being able to capture, filter and analyze biomolecules and trace substances left behind by fingerprints, such as DNA or explosives like TNT.

The approach works by focusing an infrared laser, using mirrors and optical fibers, onto a surface containing a fingermark. Within a tiny surface area, the laser heats up the moisture or any water present on the surface, causing chemical bonds in the water to stretch and vibrate. With enough energy focused in a small area, the water basically “explodes,” becoming a gas and lifting biomolecules such as DNA with it off of a surface. This process is called laser ablation. The laser system that Murray’s lab uses is extremely selective – it causes vibrations in water O-H bonds more than in any other bonds in other molecules.

While the process sounds violent, it’s actually much less so than other mechanisms used to remove biomolecules from surfaces. Laser ablation can capture very delicate materials such as DNA while preserving their integrity for analysis.

After the laser ablates or lifts the fingermark, a small vacuum pump system pulls the water and all associated molecules with it into a thimble-sized filter that captures everything left behind by someone’s finger. Researchers can then flush the contents of the filter into an analysis device such as a mass spectrometer or a gas chromatography–mass spectrometer. These devices determine the mass of any compounds or molecules in the sample, allowing researchers to identify exactly what they are.

“Let’s say I was preparing a bomb, and I wasn’t using gloves. If I touched the bomb and then touched a surface, my fingerprint might leave behind trace amounts of an explosive,” Fabrizio said. Using this technique, forensic teams could lift those compounds off of a surface, for example with a portable laser system or, better yet, a portable laser system transported by a robot, and send the samples into a lab for analysis and identification. In the future, this approach could potentially help forensic bomb squads find and deactivate bombs without needing to send squad members into dangerous areas, while potentially at the same time capturing and identifying any genetic material also present at the site. 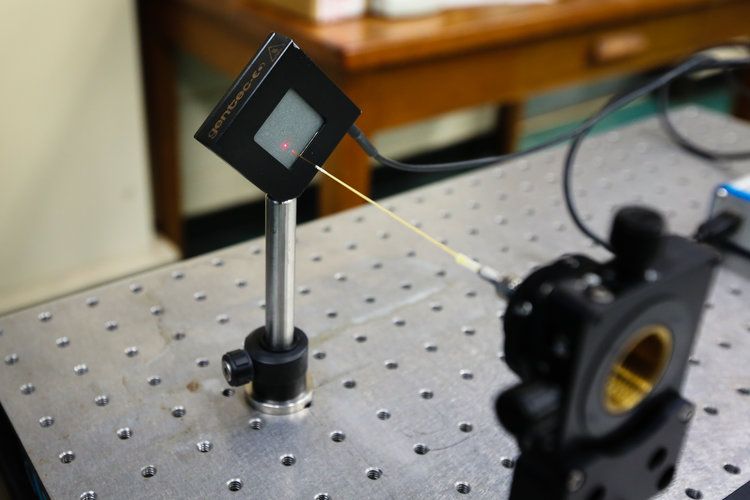 Image: The infrared laser in Murray's lab used to ablate fingermarks. Here, the laser is being channeled through an optical fiber. Credit: Paige Jarreau.

The research team in Murray’s lab is also working on creating optical fiber attachments for their laser system that would allow for a portable laser fingermark-capturing system to sample various surfaces in the field. Dependent on funding, Fabrizio plans to continue developing this portable system in the future.

“A laser beam is a straight line,” Fabrizio said. “It can be difficult to focus a traditional laser system at a precise point, especially on an uneven surface. But if you run that laser through a flexible optical fiber, similar to how a fiber optic cable works, you can sample a wider variety of surfaces more easily.” 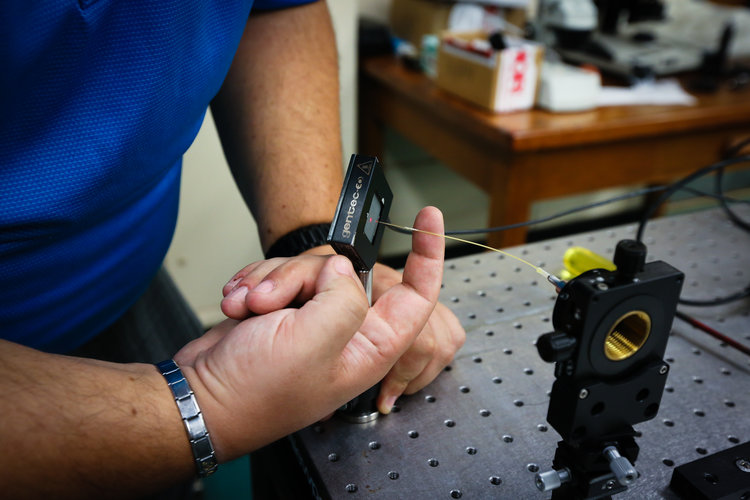 Image: Fabrizio demonstrates a flexible germanium oxide optical fiber laser attachment that could enable a portable fingermark ablation device for use by forensic experts. The laser light is visible as a red dot on the detection device.

Using infrared laser ablation coupled to vacuum capture, Fabrizio and colleagues in Murray’s lab demonstrated successful ablation and capture of materials from fingermarks on glass, plastic, aluminum and cardboard surfaces. Their results were published in the Journal of The American Society of Mass Spectrometry on May 22, 2017.

Fingermarks and associated materials on porous cardboard surfaces in particular can be next to impossible to capture using traditional forensic methods, such as placing sticky tape on the surface to pull the fingerprint. But Murray’s lab’s laser system can penetrate porous surfaces like cardboard easily.

The research group created fingermarks on glass, plastic, aluminum and cardboard to test their infrared laser ablation system. They laced these fingermarks with substances as diverse as caffeine, Neosporin antiseptic cream, condom lubricants and TNT. In each case, they were able to identify these substances after fingermark capture using mass spectrometry.

“We have been using infrared lasers for many years to ablate biomolecules from tissue samples for mass spectrometry, so we know that they are very efficient,” Murray said. “Thanks to Eden’s initiative, we now have a promising new application."

This article has been republished from materials provided by LSU College of Science Blog. Note: material may have been edited for length and content. For further information, please contact the cited source.