Complete the form below to unlock access to this Audio Article: "Microglial Memories of Stress "

Using an animal model of chronic stress, researchers at The Ohio State University have shown that the immune cells of the brain, called microglia, hold unique signatures of chronic stress that leave the animal more sensitive to future stressful experiences, evident by increased anxiety and immune responses. Eliminating microglia so that these "stress memories" could not be maintained did not prevent the increased anxiety in response to later stress but did prevent the hypersensitive immune response.

The study, published in Biological Psychiatry, indicates that eliminating the microglia can reverse some aspects of stress sensitization, which lasts for over 3 weeks after chronic stress ends. The increased anxiety behavior, which was not prevented by elimination of the microglia, may have resulted from stress signatures maintained in neurons, which also persist for weeks after chronic stress.

"It is remarkable that memories of stress are not only stored in nerve cells, but also in the microglia, the immune cells of the brain. It is not the case that these immune cells can generate a representation of the stressful events. However, the microglia appear to be primed to produce a heightened immune response long after the stressful events that sensitized them have passed," said John Krystal, MD, Editor of Biological Psychiatry.

Co-senior authors of the study, John Sheridan, PhD, and Jonathan Godbout, PhD, study how chronic stress makes a person more vulnerable to events later in life that otherwise might not have caused stress. Using the same mouse model of chronic stress called repeated social defeat (RSD), they had previously shown that over 3 weeks after the stress ended, when the anxiety and the inflammatory response had diminished, they could recall both the behavioral and inflammatory responses with even just a brief exposure to the stressor. "This recall response indicated that the initial exposure to repeated social defeat resulted in sensitization of both neural and microglial populations that responded to less intense exposure to the stressor," said Dr. Sheridan. 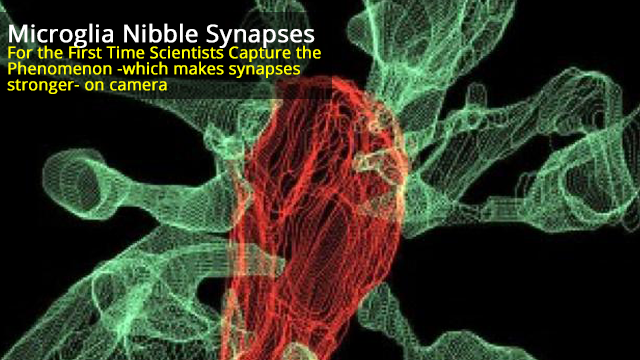 Captured on Film for the First Time: Microglia nibbling on brain synapses

END_OF_DOCUMENT_TOKEN_TO_BE_REPLACED

In this study, when the animals were briefly exposed to a stressful event 24 days after RSD, the sensitized microglia recruited large amounts of inflammatory cells called monocytes to the brain, a process that increases the chance that anxiety will return in previously stressed-out mice. This recruitment process depended on the presence of microglia, as it was prevented when the microglia were missing.

"Overall, microglia-specific priming can be reversed, but the effectiveness of this approach depends on the context in which you are testing," said Dr. Godbout. Stress sensitization involves hyperactive behavioral and immune responses, but only the immune component was prevented by eliminating and repopulating microglia.

This article has been republished from materials provided by Elsevier. Note: material may have been edited for length and content. For further information, please contact the cited source.