New research suggests that certain types of brain cells may be "picky eaters," seeming to prefer one specific energy source over others. The finding has implications for understanding the cognitive decline seen in aging and degenerative diseases such as Alzheimer's and multiple sclerosis.

Studying mice, investigators from Washington University School of Medicine in St. Louis showed that a specific energy source called NAD is important in cells responsible for maintaining the overall structure of the brain and for performing complex cognitive functions. NAD (nicotinamide adenine dinucleotide) is a molecule that harvests energy from nutrients in food and converts it into a form cells can use.

The work appears in two journal articles—in the May 8 issue of The EMBO Journal, a publication of the European Molecular Biology Organization, and in a recent issue of The Journal of Neuroscience.

"We are interested in understanding how cells make NAD and what implications that has for cellular function, especially in the context of aging and longevity," said Shin-ichiro Imai, MD, PhD, professor of developmental biology and of medicine and senior author of both papers. "We know, for example, NAD levels decrease with age in tissues such as muscle and fat. We wanted to find out if the same is true in the brain."

In The EMBO Journal, they reported that NAD levels decreased with age in the mouse hippocampus, a vital region of the brain for cognition. The researchers then used genetic techniques to find out what would happen when NAD manufacturing is turned off in the adult neural stem cells of the mouse brain.

"Neural stem cells are very metabolically expensive, so you might expect them to be particularly vulnerable to loss of an energy source," said first author Liana Roberts Stein, PhD, postdoctoral researcher in Imai's lab. "There are other energy sources for brain cells, such as glucose, but no one had ever looked at where NAD is coming from in these cells." 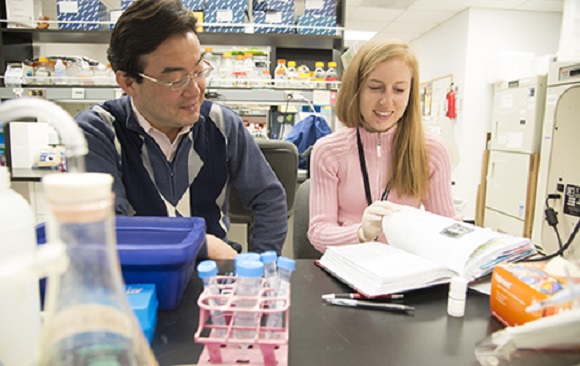 According to the researchers, there are four pathways of NAD synthesis, and the scientists focused on just one. They wanted to find out whether this particular pathway—a longtime focus of Imai's lab—is important for these cells or if the other routes could compensate.

The pathway begins with the B vitamin nicotinamide. Cells take dietary nicotinamide and, with a helper protein called Nampt, manufacture a molecule called NMN, which then is processed further to make NAD. When Stein eliminated Nampt from neural stem cells, several significant changes took place.

Levels of NAD dropped, and the neural stem cells stopped dividing; they stopped renewing themselves; and they stopped being able to create important cells that insulate axons, the "wires" that carry electrical signals throughout the brain. With less insulation, these signals slow down, impairing brain function.

Imai and Stein pointed out possible therapeutic implications of this finding, especially in light of what is known about cognitive decline in aging and certain diseases.

"Scientists have shown that with age there actually isn't a large decrease in the total neuron population," Stein said. "But there is quite a substantial decrease in white matter, which is primarily composed of cells that function in axon insulation. This pathway also could be relevant in conditions involving loss of cells that make this insulation, like multiple sclerosis."

Imai and Stein also found they could prevent the loss of the neural stem cells missing Nampt by giving the mice NMN, the next molecule in the chain of events leading to NAD.

"We gave the mice NMN in their drinking water for 12 months," Stein said. "And at the higher dose, we saw a rescue of the neural stem cell pool in aged mice."

Imai called this finding exciting because it supports the possibility of a future NMN supplement.

"We think that NMN could convey a similar effect in people," Imai said. "A future clinical trial for NMN will tell us if it has any efficacy in humans."

In addition to maintaining stem cell populations and keeping the brain supplied with all its cell types, the investigators showed that NAD also is vital for the process of cognition itself.

Reporting in The Journal of Neuroscience, they showed that neurons of the mouse forebrain depend heavily on NAD in normal cognitive function. Instead of deleting Nampt in stem cells, this time Stein deleted it only in neurons of the forebrain. All other cells were normal, including those that make axon insulation.

Without Nampt and its eventual product, NAD, in forebrain neurons, the behavior of the mice changed dramatically, according to the investigators.

"The mice were really hyperactive, with a twofold increase in activity levels," Stein said. "They also showed a loss of anxiety-like behaviors. These mice didn't seem to sense or fear potentially threatening situations and showed fairly drastic memory defects."

Stein pointed out that these neurons are in a region of the brain known to be particularly vulnerable to neurodegenerative conditions from Alzheimer's disease to stroke.

"It's possible that these neurons' dependence on Nampt is responsible for their extreme susceptibility to these conditions," she said. "It would be interesting to model some of these diseases in mice and see if supplementing NMN provides any benefit to their behavior or memory."

"We haven't done that study yet," Imai added. "But this is the direction the entire field is going."