Japanese researchers showed monkeys a number of images representing various glosses and then they measured the responses of 39 neurons by using microelectrodes. They found that a specific population of neurons changed the intensities of the responses linearly according to either the contrast-of-highlight, sharpness-of-highlight, or brightness of the object. This shows that these 3 perceptual parameters are used as parameters when the brain recognizes a variety of glosses. They also found that different parameters are represented by different populations of neurons. This was published in the Journal of Neuroscience. 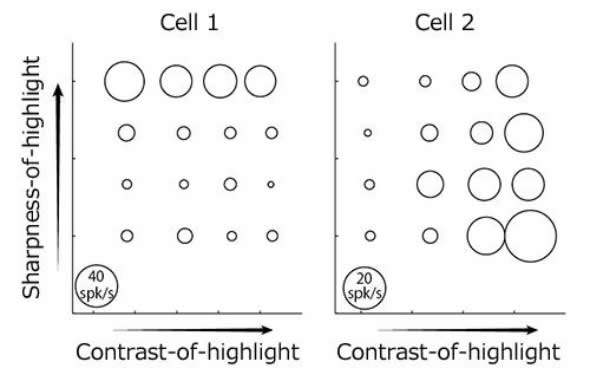 These are responses of example neurons with different selectivities. The size of each circle shows the strength of the response. Credit: © Hidehiko Komatsu

The gloss of an object surface provides information about the condition of that object. For instance, whether it is wet or dry, whether food is fresh or old. Several gloss-related physical parameters such as specular reflectance and diffuse reflectance have been described and used in computer graphics so far. However, the parameters used when neurons respond to gloss have not yet been found.

A Japanese research group led by Hidehiko Komatsu, professor of the National Institute for Physiological Sciences (NIPS), National Institutes of Natural Sciences (NINS), in collaboration with the Advanced Telecommunications Research Institute International (ATR) prepared 16 images representing various glosses and showed them to monkeys. In a circumscribed area in the inferior temporal cortex of the brain, neurons strengthened their responses proportionately as the contrast-of-highlight and/or sharpness-of-highlight got higher. Neural responses also vary greatly depending on the brightness, for instance, whether the object is black, gray, or white. Furthermore, the perceptual gloss parameters of the presented image could be fairly precisely predicted from the strengths of the population neural responses. 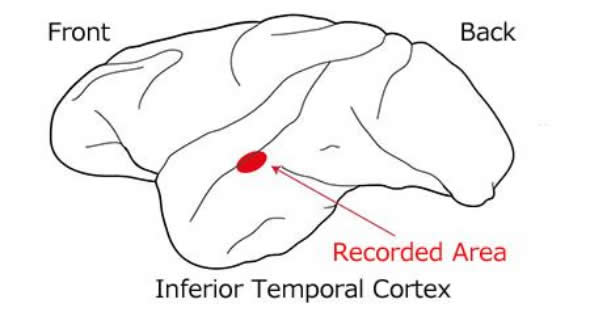 The neural responses of the inferior temporal cortex of Japanese monkeys were investigated through the use of microelectrodes. Credit: © Hidehiko Komatsu

By the application of these findings in an artificial image recognition system, the researchers are expecting that it would be able to develop robots that recognize gloss like humans.