Complete the form below and we will email you a PDF version of "Neuroprosthetics for paralysis: A new implant on the spinal cord"

Ecole Polytechnique Fédérale de Lausanne (EPFL) scientists have managed to get rats walking on their own again using a combination of electrical and chemical stimulation. But applying this method to humans would require multifunctional implants that could be installed for long periods of time on the spinal cord without causing any tissue damage. This is precisely what the teams of professors Stéphanie Lacour and Grégoire Courtine have developed. Their e-Dura implant is designed specifically for implantation on the surface of the brain or spinal cord. The small device closely imitates the mechanical properties of living tissue, and can simultaneously deliver electric impulses and pharmacological substances. The risks of rejection and/or damage to the spinal cord have been drastically reduced.

So-called “surface implants” have reached a roadblock; they cannot be applied long term to the spinal cord or brain, beneath the nervous system’s protective envelope, otherwise known as the “dura mater,” because when nerve tissues move or stretch, they rub against these rigid devices. After a while, this repeated friction causes inflammation, scar tissue buildup, and rejection.

Flexible and stretchy, the implant developed at EPFL is placed beneath the dura mater, directly onto the spinal cord. Its elasticity and its potential for deformation are almost identical to the living tissue surrounding it. This reduces friction and inflammation to a minimum. When implanted into rats, the e-Dura prototype caused neither damage nor rejection, even after two months. More rigid traditional implants would have caused significant nerve tissue damage during this period of time.

The researchers tested the device prototype by applying their rehabilitation protocol—which combines electrical and chemical stimulation—to paralyzed rats. Not only did the implant prove its biocompatibility, but it also did its job perfectly, allowing the rats to regain the ability to walk on their own again after a few weeks of training.

“Our e-Dura implant can remain for a long period of time on the spinal cord or the cortex, precisely because it has the same mechanical properties as the dura mater itself. This opens up new therapeutic possibilities for patients suffering from neurological trauma or disorders, particularly individuals who have become paralyzed following spinal cord injury,” explains Lacour, co-author of the paper, and holder of EPFL’s Bertarelli Chair in Neuroprosthetic Technology. 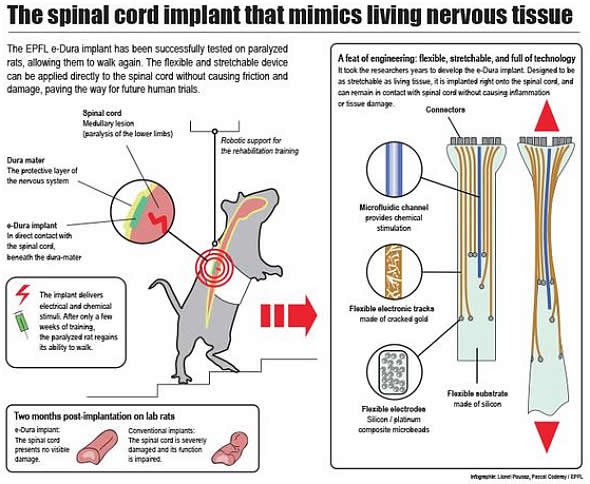 Flexibility of tissue, efficiency of electronics

Developing the e-Dura implant was quite a feat of engineering. As flexible and stretchable as living tissue, it nonetheless includes electronic elements that stimulate the spinal cord at the point of injury. The silicon substrate is covered with cracked gold electric conducting tracks that can be pulled and stretched. The electrodes are made of an innovative composite of silicon and platinum microbeads. They can be deformed in any direction, while still ensuring optimal electrical conductivity. Finally, a fluidic microchannel enables the delivery of pharmacological substances—neurotransmitters in this case—that will reanimate the nerve cells beneath the injured tissue.

The implant can also be used to monitor electrical impulses from the brain in real time. When they did this, the scientists were able to extract with precision the animal's motor intention before it was translated into movement.

"It's the first neuronal surface implant designed from the start for long-term application. In order to build it, we had to combine expertise from a considerable number of areas," explains Courtine, co-author and holder of EPFL's IRP Chair in Spinal Cord Repair. "These include materials science, electronics, neuroscience, medicine, and algorithm programming. I don't think there are many places in the world where one finds the level of interdisciplinary cooperation that exists in our Center for Neuroprosthetics."

For the time being, the e-Dura implant has been primarily tested in cases of spinal cord injury in paralyzed rats. But the potential for applying these surface implants is huge—for example in epilepsy, Parkinson's disease and pain management. The scientists are planning to move towards clinical trials in humans, and to develop their prototype in preparation for commercialization.