New Insight into How the Brain Regulates Its Blood Flow

In a new study published online in the Journal of the American Heart Association June 12, 2014, researchers at Columbia Engineering report that they have identified a new component of the biological mechanism that controls blood flow in the brain. Led by Elizabeth M. C. Hillman, associate professor of biomedical engineering, the team has demonstrated, for the first time, that the vascular endothelium plays a critical role in the regulation of blood flow in response to stimulation in the living brain.

"We think we've found a missing link in our understanding of how the brain dynamically tunes its blood flow to stay in sync with the activity of neurons," says Hillman, who has a joint appointment in Radiology. Hillman has spent more than 10 years using advanced imaging tools to study how blood flow is controlled in the brain. "Earlier studies identified small pieces of the puzzle, but we didn't believe they formed a cohesive 'big picture' that unified everybody's observations. Our new finding seems to really connect the dots."

Understanding how and why the brain regulates its blood flow could provide important clues to understanding early brain development, disease, and aging. The brain increases local blood flow when neurons fire, and this increase is what is detected by a functional magnetic resonance imaging (fMRI) scan. Hillman found that the vascular endothelium, the inner layer of blood vessels, plays a critical role in propagating and shaping the blood flow response to local neuronal activity. While the vascular endothelium is known to do this in other areas of the body, until now the brain was thought to use a different, more specialized mechanism and researchers in the field were focused on the cells surrounding the vessels in the brain.

"Once we realized the importance of endothelial signaling in the regulation of blood flow in the brain," Hillman adds, "we wondered whether overlooking the vascular endothelium might have led researchers to misinterpret their results."

"As we identified this pathway, so many things fell into place," she continues, "We really hope that our work will encourage others to take a closer look at the vascular endothelium in the brain. So far, we think that our findings have far-reaching and really exciting implications for neuroscience, neurology, cardiovascular medicine, radiology, and our overall understanding of how the brain works."

This research was carried out in Hillman's Laboratory for Functional Optical Imaging, led by PhD student and lead author on the study, Brenda Chen. Other lab members who assisted with the study included PhD and MD/PhD students from Columbia Engineering, Neurobiology and Behavior, and Columbia University Medical Center. The group combined their engineering skills with their expertise in neuroscience, biology, and medicine to understand this new aspect of brain physiology.

To tease apart the role of endothelial signaling in the living brain, they had to develop new ways to both image the brain at very high speeds, and also to selectively alter the ability of endothelial cells to propagate signals within intact vessels. The team achieved this through a range of techniques that use light and optics, including imaging using a high-speed camera with synchronized, strobed LED illumination to capture changes in the color, and thus the oxygenation level of flowing blood. Focused laser light was used in combination with a fluorescent dye within the bloodstream to cause oxidative damage to the inner endothelial layer of blood brain arterioles, while leaving the rest of the vessel intact and responsive. The team showed that, after damaging a small section of a vessel using their laser, the vessel no longer dilated beyond the damaged point. When the endothelium of a larger number of vessels was targeted in the same way, the overall blood flow response of the brain to stimulation was significantly decreased. 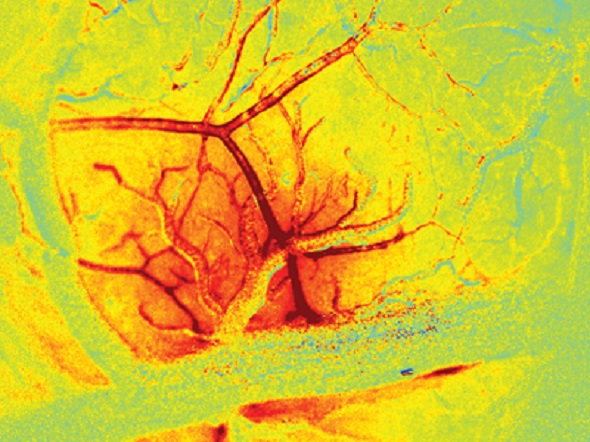 The blush of the brain. Red hue shows the increase in the amount of blood in the brain (total hemoglobin concentration) in response to stimulation. This response extends up along surface arteries in a wave of dilation that travels over a millimeter in less than half a second. This ‘brain blush’ provides the contrast seen in fMRI images, and is essential for normal brain function. The green vessel crossing the responding region is a draining vein. Veins exhibit very little diameter change in response to normal stimulation, acting as passive drains of increased blood flow. Credit: Elizabeth Hillman

"Our finding unifies what is known about blood flow regulation in the rest of the body with how it is regulated in the brain," Hillman explains. "This has wider reaching implications since there are many disease states known to affect blood flow regulation in the rest of the body that, until now, were not expected to directly affect brain health." For instance, involvement of the endothelium might explain neural deficits in diabetics; a clue that could lead to new diagnostics tests and treatments for neurological conditions associated with broader cardiovascular problems. "Improving our fundamental understanding of how and why the brain regulates its blood flow is key to understanding how and when this mechanism could be altered or broken," she says. "We think this could extend to studies of early brain development, aging, and diseases such as Alzheimer's and dementia."

The team's research findings may also explain the effects of some drugs on the brain, and on the fMRI response to stimulation, since the vascular endothelium is exposed to chemicals in the bloodstream. "Overall, this work could dramatically improve our ability to interpret fMRI data collected in humans, perhaps making it a better tool for doctors to understand brain disease," she adds.

Hillman plans next to address the broad range of implications her latest finding may have. She wants to explore the effects of drugs and disease states on the coupling of blood flow to neuronal activity in the brain, and is now starting studies to explore fMRI data from a range of different disease states to see whether she can find signs of neurovascular dysfunction. She is also working on characterizing the co-evolution of neuronal and hemodynamic activity during brain development and is beginning to develop new imaging tools that will enable non-invasive, inexpensive monitoring of brain hemodynamics in infants and children who cannot be imaged within an MRI scanner.

"Our latest finding gives us a new way of thinking about brain disease -- that some conditions assumed to be caused by faulty neurons could actually be problems with faulty blood vessels," Hillman adds. "This gives us a new target to focus on to explore treatments for a wide range of disorders that have, until now, been thought of as impossible to treat. The brain's vasculature is a critical partner in normal brain function. We hope that we are slowly getting closer to untangling some of the mysteries of the human brain."