Stuttering -- a speech disorder in which sounds, syllables or words are repeated or prolonged -- affects more than 70 million people worldwide. That's 1 percent of the global population. Four times as many men as women are afflicted with the disorder and, while the condition is not life-threatening, it is debilitating as it interferes with effective communication and erodes self-esteem and confidence.

Two new studies from University of California - Santa Barbara (UCSB) researchers provide new insight into the treatment of stuttering as well as understanding its physiological basis. The first paper, published in the American Journal of Speech-Language Pathology, compares a new treatment developed at UCSB to the standard best practices protocol. The second study, which appears in the Journal of Speech, Language, and Hearing Research, uses imaging to identify abnormal areas of white matter in the brains of adult stutterers. 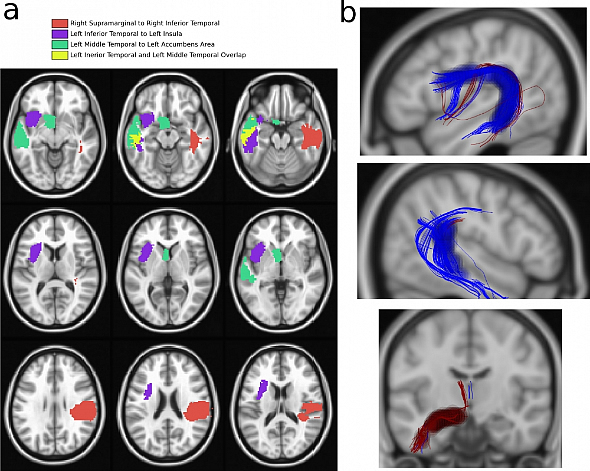 According to co-author Janis Ingham, a professor emerita of speech and hearing sciences at UCSB and co-author of both papers, the two studies taken together demonstrate two critical points: A neuroanatomic abnormality exists in the brains of people who stutter, yet they can learn to speak fluently in spite of it.

"Together these papers break new ground, one in the treatment area and the other in neuroanatomy," said Roger Ingham, a professor of speech and hearing sciences at UCSB and an author on both papers. "I decided to work with Scott Grafton in the psychology department to see whether it's possible to improve stuttering treatment by having a better knowledge of the neural systems that are functionally related to the disorder."

Roger Ingham's new Modifying Phonation Intervals (MPI) Stuttering Treatment Program takes a somewhat different approach from the current standard protocol, which teaches stutterers to prolong their speech. The intensive MPI program teaches stutterers to reduce the frequency with which they produce very short intervals of phonation while speaking. A phonated interval is the elapsed time of a voiced unit of speech. In the word "shout," for example, "out" is a voiced (phonated) unit; "sh" is an unvoiced unit. The MPI program software provides real-time feedback to the stutterer regarding the occurrence of these short phonated intervals so he or she can learn to reduce their occurrence, which improves fluency.

After a lengthy period of basic research and testing, the MPI program was studied in phase II clinical trials with funding from the National Institutes of Health. Ingham and his colleagues found that reducing the frequency of the speaker's short phonated intervals resulted in durable and natural-sounding fluent speech for the majority of study participants.

"It's not a five-minute job," said Ingham, lead author of the paper on MPI's efficacy. "A person who stutters needs to be under this treatment system for two to three hours a day, six days a week for the first phase of the program, which lasts about three weeks."

MPI treatment is divided into four phases, each designed to be managed jointly by the person who stutters and the clinician. MPI program software is available as an app for the iPad. The clinician uses a "master" app to teach the stutterer how to follow the program on an iPad at home.

Progress is contingent on performance. Once participants complete the initial phase, they move on to increasingly complex speaking tasks until they ultimately conquer what they deem to be their most difficult speaking situations.

"We have to be extraordinarily creative in developing some of these situations," Roger Ingham noted. "We've had participants talking before classes and being interviewed by UCSB's Nobel Prize winners, but we also use Toastmasters where they get a lot of experience speaking in public."

Ingham's team is currently investigating the use of virtual reality in conjunction with the MPI treatment program. They are exploring whether those difficult speaking situations can be created more efficiently and effectively through reality versions.

The study results show that outcomes for the MPI and prolonged speech treatment groups were similar. However, more people in the MPI program were able to identify and employ the specific speech behaviors necessary for successful treatment. Ingham noted that twice as many people receiving the MPI treatment were successful in maintaining naturally fluent speech 12 months after they finished the program compared to those receiving the prolonged speech treatment.

The Neurophysiology of Stuttering

But what causes stuttering in the first place? The answer appears to lie in the brain's white matter.

Led by Grafton, a professor in UCSB's Department of Psychological and Brain Sciences, the imaging study used diffusion spectrum imaging (DSI) in an MRI scanner to examine the white matter in the brains of eight adult stutterers. DSI is able to parse tracts in the brain and follow them beyond the point where they intersect. Grafton, also a member of the campus's Institute for Collaborative Biotechnologies, likens the brain's tracts to highways and surface streets, only in the brain the intersections are three-dimensional.

Grafton and the paper's lead author, Matt Cieslak, a graduate student in Grafton's lab, discovered abnormalities of the arcuate fasciculus, one of the key pathways that connect the language areas of the brain. So named because it forms an arch, the arcuate fasciculus connects at the front of the brain to the area of the cerebral cortex linked to speech production. At the back of the brain, it branches into three parts.

"What's interesting is the back half," said Grafton. "In the vast majority of the stutterers we scanned, there seems to be a large portion of the connection projecting into the temporal cortex, an area of the brain also critical for speech perception. Seven of eight subjects are missing this third branch of the arcuate fasciculus bundle. So in this small group, we can see a really, really strong effect."

These results required not only sensitive imaging but also completely new analysis methods to examine each tract in the brain separately and at the individual subject level. "Big advances have allowed us to reconstruct pathways with greater detail than we were able to do before," said Cieslak, who developed the new analysis techniques.

"In terms of data, each subject produces what looks like a bowl of spaghetti or a ball of yarn and we had to figure out how to put that data into an analytical framework," he explained. "About 40,000 lines of code later we now have a platform for analyzing white matter data, which can be expanded to a large set of subjects."

Going forward, the researchers would like to study the brains of recovered stutterers to see whether white matter actually changes with treatment. "Is there something special in the wiring of people who recover?" Grafton asked. "Maybe they are missing part of the arcuate fasciculus pathway but they've got another one that's strong enough to pick up the slack. We'd like to be able to investigate that possibility using DSI."

Once treated as a psychological or emotional condition, stuttering can now be traced to brain neuroanatomy and physiology, according to the researchers. "We're one of a number of groups making a strong case that there is something fundamentally different about the brains of people who stutter," Grafton said.

"I'm really excited about this work because it's transforming how we do research in patient groups with very common and challenging developmental disorders that have a great impact on people's lives but are otherwise largely ignored in neuroscience and by funding agencies," Grafton added. "They get diagnosed or described and we throw therapies at them but we don't really understand the pathophysiologic basis or the biology of these problems. The fact that we can now see big changes in scans of individuals who stutter is huge. It opens up a lot of opportunities, not just for stutterers but for all kinds of developmental problem like dyslexia, childhood speech apraxia and disorders of coordination."

People who have or have had issues with stuttering and are interested in participating in ongoing brain scan studies should email Roger Ingham at rjingham@speech.ucsb.edu