A patient’s budding cortex — in a dish?

Complete the form below and we will email you a PDF version of "A patient’s budding cortex — in a dish? "

A patient tormented by suicidal thoughts gives his psychiatrist a few strands of his hair. She derives stem cells from them to grow budding brain tissue harboring the secrets of his unique illness in a petri dish. She uses the information to genetically engineer a personalized treatment to correct his brain circuit functioning. Just Sci-fi? Yes, but...

An evolving “disease-in-a-dish” technology, funded by the National Institutes of Health (NIH), is bringing closer the day when such a seemingly futuristic personalized medicine scenario might not seem so far-fetched. Scientists have perfected mini cultured 3-D structures that grow and function much like the outer mantle – the key working tissue, or cortex — of the brain of the person from whom they were derived. Strikingly, these “organoids” buzz with neuronal network activity. Cells talk with each other in circuits, much as they do in our brains.

“There’s been amazing progress in this field over the past few years,” said Thomas R. Insel, M.D., Director of the NIH’s National Institute of Mental Health, which provided most of the funding for the study. “The cortex spheroids grow to a state in which they express functional connectivity, allowing for modeling and understanding of mental illnesses. They do not even begin to approach the complexity of a whole human brain. But that is not exactly what we need to study disorders of brain circuitry. As we seek advances that promise enormous potential benefits to patients, we are ever mindful of the ethical issues they present.”

Prior to the new study, scientists had developed a way to study neurons differentiated from stem cells derived from patients’ skin cells — using a technology called induced pluripotent stem cells (iPSCs). They had even produced primitive organoids by coaxing neurons and support cells to organize themselves, mimicking the brain’s own architecture. But these lacked the complex circuitry required to even begin to mimic the workings of our brains. 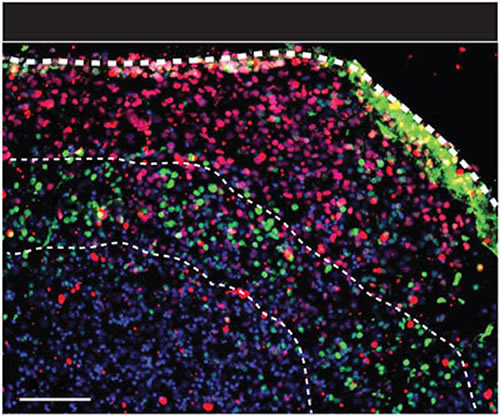 Neurons and supporting cells in the spheroids form layers and organize themselves according to the architecture of the developing human brain and network with each other. Credit: Sergiu Pasca, M.D., Stanford University

Based on an improved, streamlined method for producing iPSCs, Pasca’s team’s cortex-like spheroids harbor healthier neurons supported by a more naturalistic network of supporting glial cells, resulting in more functional neural connections and circuitry. Like the developing brain, the neurons form layers and talk with each other via neural networks. The spheroid technology is more consistent than earlier organoids in generating the same kinds of cortex-like structures in repeated experiments.

The budding cortex also lends itself to analysis using conventional brain slice methods. So, in a sci-fi future, it might potentially reveal what circuits went awry in the developing cortex of a particular individual with a brain disorder.

“While the technology is still maturing, there is great potential for using these assays to more accurately develop, test safety and effectiveness of new treatments before they are used in individuals with a mental illness,” said David Panchision, Ph.D., NIMH program director for stem cell research.

What’s next? Perhaps development of multiple neuron subtypes that normally populate the cortex, as well as long-distance connections between this cortex-like structure and other -- yet to be developed – organoid structures.