Pigeons, like humans, can place everyday things in categories

Pigeons, like humans, can place everyday things in categories

Complete the form below and we will email you a PDF version of "Pigeons, like humans, can place everyday things in categories "

Pinecone or pine nut? Friend or foe? Distinguishing between the two requires that we pay special attention to the telltale characteristics of each. And as it turns out, us humans aren't the only ones up to the task.

According to researchers at the University of Iowa, pigeons share our ability to place everyday things in categories. And, like people, they can home in on visual information that is new or important and dismiss what is not.

"The basic concept at play is selective attention. That is, in a complex world, with its booming, buzzing confusion, we don't attend to all properties of our environment. We attend to those that are novel or relevant," says Edward Wasserman, UI psychology professor and secondary author on the paper, published in the Journal of Experimental Psychology: Animal Learning and Cognition.

Selective attention has traditionally been viewed as unique to humans. But as UI research scientist and lead author of the study Leyre Castro explains, scientists now know that discerning one category from another is vital to survival.

"All animals in the wild need to distinguish what might be food from what might be poison, and, of course be able to single out predators from harmless creatures," she says.

More than that, other creatures seem to follow the same thought process humans do when it comes to making these distinctions. Castro and Wasserman's study reveals that learning about an object's relevant characteristics and using those characteristics to categorize it go hand-in-hand.

When observing pigeons, "We thought they would learn what was relevant (step one) and then learn the appropriate response (step two)," Wasserman explains. But instead, the researchers found that learning and categorization seemed to occur simultaneously in the brain.

To test how, and indeed whether, animals like pigeons use selective attention, Wasserman and Castro presented the birds with a touchscreen containing two sets of four computer-generated images -- such as stars, spirals, and bubbles.

The pigeons had to determine what distinguished one set from the other. For example, did one set contain a star while the other contained bubbles? 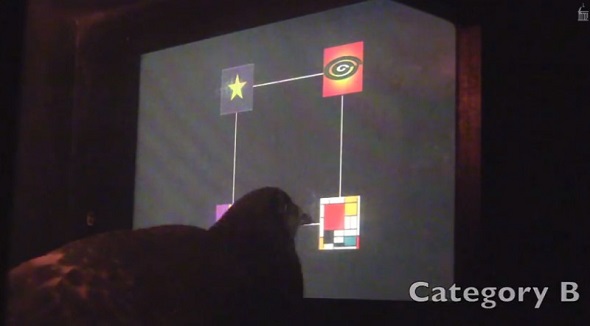 Pigeon making a selection. Pigeons determined whether sets of images belong to category A (designated by a zebra pattern) or category B (designated by a geometric pattern) by pecking at a touchscreen. Credit: Courtesy of Stephen Brzycky

By monitoring what images the pigeons pecked on the touchscreen, Wasserman and Castro were able to determine what the birds were looking at. Were they pecking at the relevant, distinguishing characteristics of each set -- in this case the stars and the bubbles?

The answer was yes, suggesting that pigeons -- like humans -- use selective attention to place objects in appropriate categories. And according to the researchers, the finding can be extended to other animals like lizards and goldfish.

"Because a pigeon's beak is midway between its eyes, we have a pretty good idea that where it is looking is where it is pecking," Wasserman says. This could be true of any bird or fish or reptile.

"However, we can't assume our findings would hold true in an animal with appendages -- such as arms -- because their eyes can look somewhere other than where their hand or paw is touching," he explains.

The University of Iowa   press release