Complete the form below and we will email you a PDF version of "Portable, low-cost optical imaging tool found to be useful in concussion evaluation"

Two separate projects, spearheaded by University of Pittsburgh Schools of the Health Sciences researchers and published recently in scientific journals, represent important steps toward demonstrating on patients the utility of portable, optical brain imaging for concussion and substantiating—via a large-scale statistical analysis—computerized neurocognitive testing for concussion.

The findings from the optical-imaging research, employing functional near infrared spectroscopy (fNIRS), provided preliminary support for the tool as a low-cost, portable device for imaging sports and military concussions, researchers said. That report, published in Brain Imaging and Behavior, quickly led to further research—a National Institutes of Health-funded study at Pitt examining the brain during dual cognitive-balance performance in children following concussion.

The fNIRS unit works like a pulse oximeter for the brain. It measures blood flow to the brain by sending light signals from sensors mounted in a 3-pound headcap, then producing images of blood oxygen changes—representing brain activity—by recording the absorption of light at different colors. The fNIRS produced readouts while participants wearing the bandana-like headcap took a computerized neurocognitive test and matched the test in revealing the brain's struggles to complete specific cognitive tasks.

"We hypothesize that cerebral blood flow is affected post-injury, and brain processing is going to be less efficient," explained Anthony Kontos, PhD, assistant research director, UPMC Sports Medicine Concussion Program and assistant professor, Pitt Department of Orthopaedic Surgery. "If you're performing a memory task or reaction-time task, it would require activation—more blood flow, more oxygen needed—in certain areas of the brain specific to that task. However, we found decreased and more spread out activation in the concussed group. In other words, their injured brains were less efficient and strained to get from elsewhere in the brain the resources necessary to perform cognitive tasks."

"We hypothesize that cerebral blood flow is affected post-injury, and brain processing is going to be less efficient," explained Anthony Kontos, PhD, assistant research director, UPMC Sports Medicine Concussion Program and assistant professor, Pitt Department of Orthopaedic Surgery. "If you're performing a memory task or reaction-time task, it would require activation—more blood flow, more oxygen needed—in certain areas of the brain specific to that task. However, we found decreased and more spread out activation in the concussed group. In other words, their injured brains were less efficient and strained to get from elsewhere in the brain the resources necessary to perform cognitive tasks."

"We knew what brain areas normally should light up," added Theodore Huppert, PhD, assistant professor, Magnetic Resonance Research Center, Pitt Department of Radiology and Swanson School of Engineering. "From our data set, we had on average decreased brain activity and more diffuse brain activity—where more areas of the brain were needed to accomplish the task because the usual areas weren't as efficient."

This preliminary study included nine people between ages 18 and 45 who were symptomatic within 15 days to 1½ months of a sports-related concussion. Researchers compared them to five people who were uninjured. The fNIRS scans indicated that the concussed brain activated at a lower threshold and drew from a wider area—a sharp contrast from earlier functional magnetic resonance imaging (fMRI) studies using concussion patients. And the decrease in oxygenated blood flow and lower test performance were detected during certain, more cognitively strenuous aspects of neurocognitive testing: word memory, design memory and symbol matching.

"It's a portable and fairly inexpensive imaging device—compared to MRI—and most important, it allows us to combine both spatial and temporal information, meaning what is going on in a specific area of the brain and when the activation is occurring," Dr. Kontos said. "It's not just location. It's not just timing. It's both." 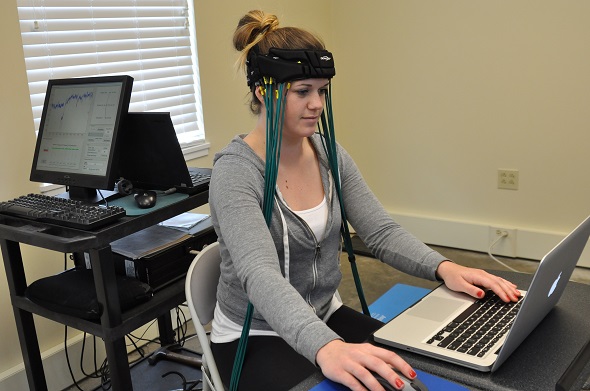 A wireless fNIRS device is expected on the market soon, availing it for further research in a clinical and perhaps even a sideline concussion setting said Dr. Huppert, who has worked with and published research on fNIRS for years. Yet Dr. Kontos underscored the utility of the current iteration: "You can wear this while doing neurocognitive testing, you can wear this during balance-testing, you can even wear it while doing exertional testing, like on a treadmill. It's useable in an environment for sports-related concussion."

"In the past decade and a half, many in the field of concussion science have tried to find an imaging tool that could help us in a clinical setting—and failed to find anything with consistency," Dr. Collins said. "This preliminary study, although small, showed us where in the brain a patient is affected and to what cognitive extent. It was enough evidence for us to keep pushing further with this potential tool."

In a separate study, a meta-analysis published in the March edition of Journal of the International Neuropsychological Society, Rock Braithwaite, EdD, professor, Department of Kinesiology and Recreation Administration, Humboldt State University, Arcata, California, synthesized all existing research using the four major computerized neurocognitive tests for concussion: Headminder, CogSport, Automated Neuropsychological Assessment Metrics (ANAM) and ImPACT. In what is considered the largest statistical review of published computerized concussion testing to date, covering 37 studies and 3,960 participants all within the first week of sustaining a concussion, he and his co-authors—who include Pitt's Dr. Kontos—produced two key findings:

"ImPACT found the largest effects for individuals who had been concussed, across all outcomes," said Dr. Braithwaite, who initiated the idea for this study. "Memory, processing speed, recall…ImPACT was able to better detect changes compared to the other computerized tests."

Dr. Braithwaite said rigorous methods were used to identify concussion studies to be used as part of the meta-analysis.

Dr. Kontos, a co-author on the meta-analysis along with Drs. Elbin and Dakan, agreed with Dr. Braithwaite that their study is an important first step.

"There is not a lot of good research out there involving many of these tests, and most of the existing research uses the ImPACT test," said Dr. Kontos, who, like the co-authors on the meta-analysis, has no financial interest in ImPACT Applications, Inc.; Dr. Collins wasn't involved in this study. "We need more research on the effectiveness of these other tests in patients with sports-related concussion."

University of Pittsburgh Schools of the Health Sciences   press release