For the first time, scientists have used Positron Emission Tomography (PET) imaging to study brain inflammation following Zika virus infection in mice, according to a study recently published online in the journal Molecular Imaging and Biology. The technology has the added benefit of allowing investigators to study the progression of the disease over time.

“Traditional methods of infectious disease research using animal models have provided limited information about disease progression until the study’s endpoint, when investigators could analyze tissues from those animals,” he said. “Imaging studies allow us to gather enhanced information through longitudinal studies of the same animal during the course of the infection.”

Zika virus was initially identified in monkeys in Uganda in 1947, with the first human case detected in 1952, according to the World Health Organization (WHO). The disease gained international attention in May 2015 when it began to spread throughout the Americas. While the virus is primarily transmitted to people through the bite of an infected mosquito, sexual transmission is also possible. Zika virus infection during pregnancy has been linked to congenital brain abnormalities, including microcephaly, and Zika virus is a trigger of Guillain-Barré syndrome.

Continuing research to investigate the link between Zika virus and a range of neurological disorders requires a better understanding of the pathogenic mechanisms causing severe disease. PET is a highly sensitive molecular imaging technique that can be used to visualize a variety of biological processes in live animal models. The USAMRIID team therefore set out to evaluate the ability and sensitivity of PET imaging, using a probe called [18F]DPA-714 to detect and quantify neuroinflammation in Zika virus-infected mice. 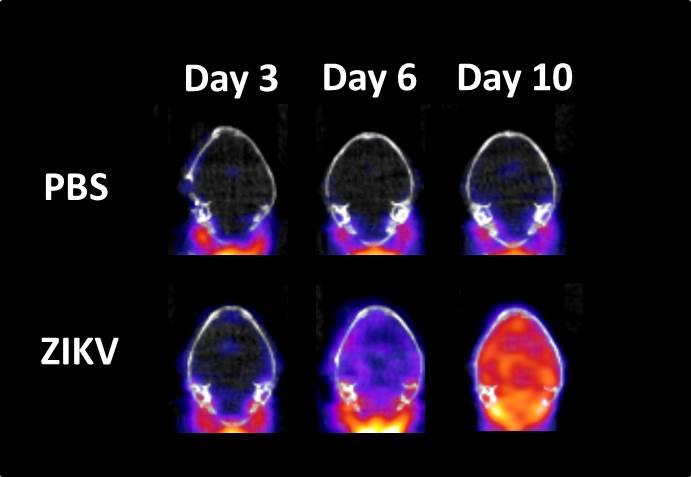 As described in the paper, they found that levels of Zika virus in the mouse brain increased from day 3 to day 10 post-infection. Over this span, the mice also showed a 2- to 6-fold increase in global brain neuroinflammation using [18F]DPA-714 PET imaging.

The work highlights the significant role played by global neuroinflammation in the progression of Zika virus infection. In addition, it demonstrates, for the first time, the ability of [18F]DPA-714 PET imaging to detect and quantify Zika virus-related neuroinflammation disseminated throughout the brains of infected mice.

Noninvasive imaging using PET and other technologies reduces the number of animals in a study by permitting the use of animals as their own controls, according to the authors. In addition, therapeutic agents can be developed and tested using imaging technologies that are directly translatable to the clinic.

“The future is bright for the application of imaging in infectious diseases,” said Bocan. “Measures of virus and bacteria distribution and the consequences of infection can be assessed in real time in the same subject. In addition, treatment with countermeasures can be evaluated with a better understanding of the state of disease progression.”

This article has been republished from materials provided by US Army Medical Institute of Infectious Diseases. Note: material may have been edited for length and content. For further information, please contact the cited source.