Complete the form below to unlock access to this Audio Article: "Protein Target Identified That Could Prevent Strokes"

Americans die of heart or cardiovascular disease at an alarming rate. In fact, heart attacks, strokes and related diseases will kill an estimated 610,000 Americans this year alone. Some medications help, but to better tackle this problem, researchers need to know exactly how the heart and blood vessels stay healthy in the first place.

Now, scientists at The Scripps Research Institute have identified a protein, called GPR68, that senses blood flow and tells small blood vessels called arterioles when to dilate. The researchers believe medications that activate GPR68 could one day be useful to treat medical conditions, including ischemic stroke.

“It has been known for decades that blood vessels sense changes in blood flow rate, and this information is crucial in regulating blood vessel dilation and controlling vascular tone,” says Ardem Patapoutian, PhD, Scripps Research professor, Howard Hughes Medical Institute investigator and senior author of the study published today in the journal Cell.

Indeed, flow-mediated dilation (FMD) is a non-invasive clinical test that informs doctors about the health of the vascular system. A compromised FMD is a precursor to a wide array of vascular diseases such as hypertension and atherosclerosis.

“Despite the importance of this process, the molecules involved within arteries to sense blood flow have remained unknown,” Patapoutian says.

Patapoutian and first author Jie Xu, PhD, a postdoctoral fellow in the lab, and now an independent scientist at the Genomics Institute of the Novartis Research Foundation (GNF), led the project to find GPR68 and determine how it works. The team started by designing a machine that uses turbulent movement of liquid to stand in for blood flow in blood vessels. This machine uses 384 pistons that move the fluid up and down over a bed of cells, placed in 384 wells on a plate. This motion simulates how blood would put pressure on those cells. 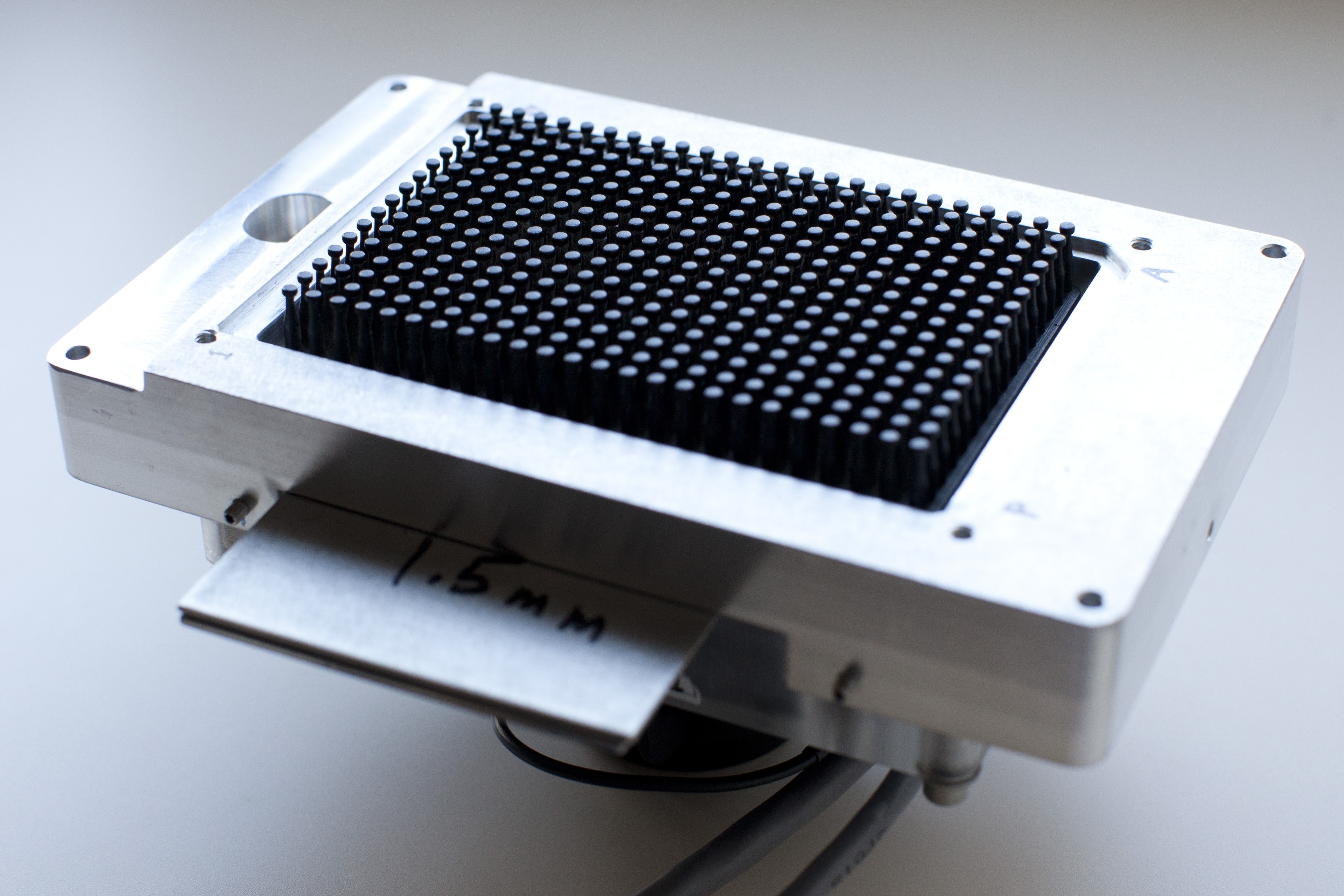 To test how cells respond to sheer stress, the researchers designed a machine that uses turbulent movement of liquid to stand in for blood flow in blood vessels. (Photo from Ardem Patapoutian and Jie Xu)

The researchers put this machine to work testing a series of cell lines, some of which had mutations that led to an overexpression of proteins potentially linked to pressure sensing. The researchers then performed a screen, knocking down the expression of different candidate genes in each of the 384 wells, and tested if that gene is required for responding to the machine’s turbulent pressure.

The tests pointed the researchers to GPR68, which the authors showed works as a sensor of mechanical stimulation. Further experiments suggested that GPR68 is essential for FMD.  “In a model organism, this protein is essential for sensing blood flow, and the proper functioning of the vascular system,” says Patapoutian.

When arterioles can’t dilate properly, the body has fewer options for lowering blood pressure in people with hypertension or getting blood through clogged vessels in cases of atherosclerosis.

“Future work will explore the role of GPR68 in clinically relevant cardiovascular diseases,” Patapoutian says. “We are also exploring the possibility of using small molecules to modulate the function of GPR68, as such molecules could be beneficial in the clinic.”

This article has been republished from materials provided by The Scripps. Note: material may have been edited for length and content. For further information, please contact the cited source.