Complete the form below and we will email you a PDF version of "Ready, aim, fire! Cancer-targeting mechanism under development"

For all their lethality, cancer cells don't look much different from healthy cells, a simple fact that causes endless pain and suffering. Finding cancer cells that have spread and threaten to grow into metastatic tumors is often a life-and-death matter.

Now, a spinoff from the University of Wisconsin-Madison called Cellectar Biosciences is developing molecules that bind to more than 60 types of cancer. Several are being tested in early-stage clinical trials, including one for brain cancer. These custom-made molecules can carry either a "flag" that shines brightly in standard medical scanners or a bit of radiation to kill the targeted cancer cells.

These molecules resemble natural components of cell membranes. Once injected intravenously, they are initially taken up throughout the body. Healthy cells break down these agents for elimination, but cancer cells lack that ability and therefore accumulate these molecules.

This phenomenon was recognized in 1970 and preliminary studies were performed at the University of Michigan, where Jamey P. Weichert was a graduate student. He continued these studies when he joined the radiology faculty at UW-Madison in 1998. In 2003, Weichert created Cellectar, which employs 25 people, including six with doctorates from UW-Madison, at its office and lab in the southeast corner of Madison. Weichert, an associate professor, is Cellectar's chief scientific officer.

Cellectar has altered the original molecule to produce a non-toxic agent that adheres tightly to cancer cells, but not to healthy cells. After years of testing in cancer cell lines and mice, Weichert and colleagues have demonstrated a phospholipid ether (PLE) compound that latches onto at least 60 types of cancer, producing a distinct signal that does not come from normal cells.

In most normal tissues, says Weichert, "there is almost no uptake. If you see a tumor, it shines like a light bulb." 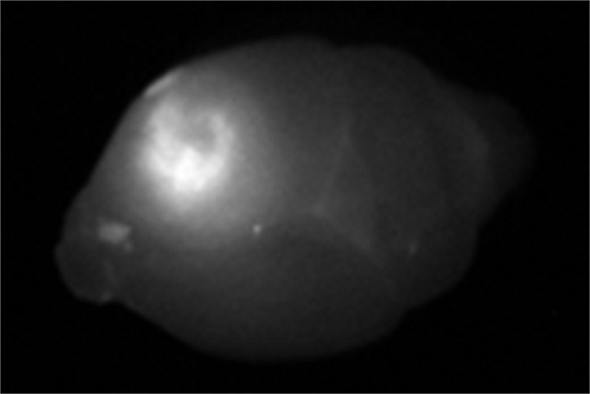 A tumor is revealed by a Cellectar-produced tag that marks cancer cells. Credit: John Kuo

One of the tags that can be joined to the engineered PLE shows up on PET scans. Another, which shines under near-infrared light, enables surgeons to easily see cancer cells during surgery. When bonded to a small dose of radioactive iodine, the PLE compound becomes a hunter-killer that can in theory deliver pinpoint radiation to cancer cells anywhere the body.

The PLE also enters cancer stem cells, the seeds of resistant cancer cells that often cause a recurrence after treatment, says John Kuo, an associate professor of neurosurgery at the UW School of Medicine and Public Health. "It was exciting to see that the cancer-selective property of the Cellectar agents also includes cancer stem cells. That's an important part of not missing cancer cells and achieving long-term cancer control."

The idea of easily and quickly identifying and treating cancer cells sounds too good to be true, concedes Kuo, who was initially "quite skeptical. So many experimental treatments don't work in humans or may work against specific cancers or with specific mutations, but are still not effective against cancer stem cells."

After years of experimenting with PLE in animal models of brain cancer, Kuo is leading a nationwide phase 2 trial to test the timing and dosing of PLE for brain cancer.

In 12 years of existence, Cellectar has attracted $75 million in investments; in 2014 the company was listed on the NASDAQ stock exchange.

Despite the gathering momentum for PLE, obstacles remain. Curing cancer in mice is not the same as curing it in people. And cancer is a wily foe known for its ability to escape whatever is thrown at it. Yet even if PLE's cancer-killing potential does not live up to its billing, the ability to tag individual cancer cells may make it easier for surgeons to detect and remove cancer with even more precision.

"This is on the cusp of being able help surgeons and patients," says Weichert. "Our job was to make the compounds and turn them over to our clinical colleagues at UW-Madison and elsewhere for testing. We think they will work, but their job is to prove it one way or the other in humans."