Published: November 7, 2017
| Original Story from the University of Geneva
News

Complete the form below to unlock access to this Audio Article: "Rescue-able Disruption of Neuronal Migration That Induces Autism-like Behavior in Rats"

During the foetal stage, millions of neurons are born in the walls of the ventricles of the brain before migrating to their final location in the cerebral cortex. If this migration is disrupted, the new-born baby may suffer serious consequences, including intellectual impairment. What happens, however, if the migration takes place but is delayed? Researchers at the University of Geneva (UNIGE), Switzerland, have discovered that even a slight delay may lead to behavioural disorders that are similar to autistic characteristics in human. Furthermore, they found that these disorders are due to the abnormally low activity of the late neurons, which leads to permanent deficit of interneuronal connections. The Geneva neuroscientists succeeded in correcting the activity of the relevant neurons, thereby restoring the missing connections and preventing the appearance of behavioural disorders. The results, which are published in the journal Nature Communications, will open up new avenues for preventing neurodevelopmental disorders linked to the cerebral cortex.

Neurons at the foetal stage are generated in the walls of the brain’s ventricles before migrating to their final destination in the cerebral cortex between the sixth and sixteenth week of pregnancy in women. This migration is governed by numerous molecular signals that control the tempo of this movement so that neurons arrive at the right place at the right time. If this migration is permanently disrupted, the new-born infant could suffer mental deficiencies or epileptic seizures, for example. But what happens if neurons arrive at the right place but are delayed?

The importance of punctuality for creating neural connections

“To find an answer, we manipulated in utero the Wnt signalling pathways which regulates the pace of migration in a few thousand rat neurons, begins Jozsef Kiss, professor in the Department of Basic Neuroscience at UNIGE’s Faculty of Medicine, so that the neurons are positioned appropriately but late. We then checked that they were in the right place and conducted various behaviour tests on the rats once they became adult”. The neuroscientists made two discoveries: not only did the rats exhibit sociability problems but they also developed repeated compulsive behaviours – both of which are symptoms related to autism in humans. But how can the late arrival of just a few thousand neurons out of millions disrupt brain function to such a degree? 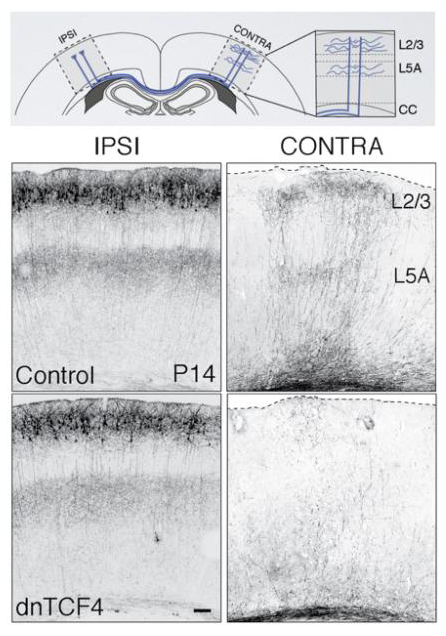 “When we marked the late neurons,” continues professor Kiss, “we observed that they receive fewer fibres and, as a result, create fewer synaptic contacts with the other neurons compared to a ‘punctual’ neuron. This lack of connections leads to a decrease in neuronal activity, which ultimately has an impact on the interactions and connectivity between the left and right hemispheres of the brain”. The late neurons, since they are poorly connected at the outset, establish fewer contacts with their counterparts in the other hemisphere. During the post-natal period in rats, the neurons only have ten or so days to develop these connections between the two hemispheres: hence the impact of a delay of a few days on the development of the brain and the resulting behavioural consequences.

Making up for lost time!

The UNIGE researchers subsequently explored the possibility of catching up on the time lost by the neurons that did not migrate on schedule by stimulating their activity remotely. “We added a gene to the late neurons so that we could control the neuronal activity remotely. We stimulated them when we wanted to in order to try to make up for the delay and subsequent lack of activity. And it worked!” says Kiss. In fact, thanks to the remote activation ‘therapy’, the researchers found that the connections between the two hemispheres were formed correctly and that no behavioural disorders appeared in the adult rats. “But it has to be done during the critical period,” adds Kiss. “In other words, during the ten days postnatally; when the inter-hemispheric connections develop in the rats. The activation of neurons after this so-called “critical period” will not rescue normal connectivity and behaviour.”

The neuroscientists at UNIGE have demonstrated for the first time that, although a brain may be formed normally, it can malfunction due to delayed neuronal migration. This handful of badly integrated neurons appear sufficient to disrupt communication between the two hemispheres of the brain, inducing behavioural problems. More surprisingly, we now know that the effects of migration delay on the connectivity can be reversed if the neuronal activity is stimulated externally in a controlled manner during the critical period of axon development. As Professor Kiss concludes: “We can now think of ways of detecting a delay in interhemispheric connections and devise ‘activation therapies’ at clinical level to prevent the behavioural problems observed in neurodevelopmental disorders such as autism.”