Researchers offer new theory: Autism has roots in early-life injury to the cerebellum

Complete the form below and we will email you a PDF version of "Researchers offer new theory: Autism has roots in early-life injury to the cerebellum"

A brain region largely known for coordinating motor control has a largely overlooked role in childhood development that could reveal information crucial to understanding the onset of autism, according to Princeton University researchers.

The cerebellum — an area located in the lower rear of the brain — is known to process external and internal information such as sensory cues that influence the development of other brain regions, the researchers report in the journal Neuron. Based on a review of existing research, the researchers offer a new theory that an injury to the cerebellum during early life potentially disrupts this process and leads to what they call "developmental diaschisis," which is when a loss of function in one part of the brain leads to problems in another region.

The researchers specifically apply their theory to autism, though they note that it could help understand other childhood neurological conditions. Conditions within the autism spectrum present "longstanding puzzles" related to cognitive and behavioral disruptions that their ideas could help resolve, they wrote. Under their theory, cerebellar injury causes disruptions in how other areas of the brain develop an ability to interpret external stimuli and organize internal processes, explained first author Sam Wang, an associate professor of molecular biology and the Princeton Neuroscience Institute (PNI).

"It is well known that the cerebellum is an information processor. Our neocortex [the largest part of the brain, responsible for much higher processing] does not receive information unfiltered. There are critical steps that have to happen between when external information is detected by our brain and when it reaches the neural cortex," said Wang, who worked with doctoral student Alexander Kloth and postdoctoral research associate Aleksandra Badura, both in PNI.

"At some point, you learn that smiling is nice because Mom smiles at you. We have all these associations we make in early life because we don't arrive knowing that a smile is nice," Wang said. "In autism, something in that process goes wrong and one thing could be that sensory information is not processed correctly in the cerebellum."

Mustafa Sahin, a neurologist at Boston's Children Hospital and associate professor of neurology at Harvard Medical School, said that Wang and his co-authors build upon known links between cerebellar damage and autism to suggest that the cerebellum is essential to healthy neural development. Numerous studies — including from his own lab — support their theory, said Sahin, who is familiar with the work but was not involved in it. 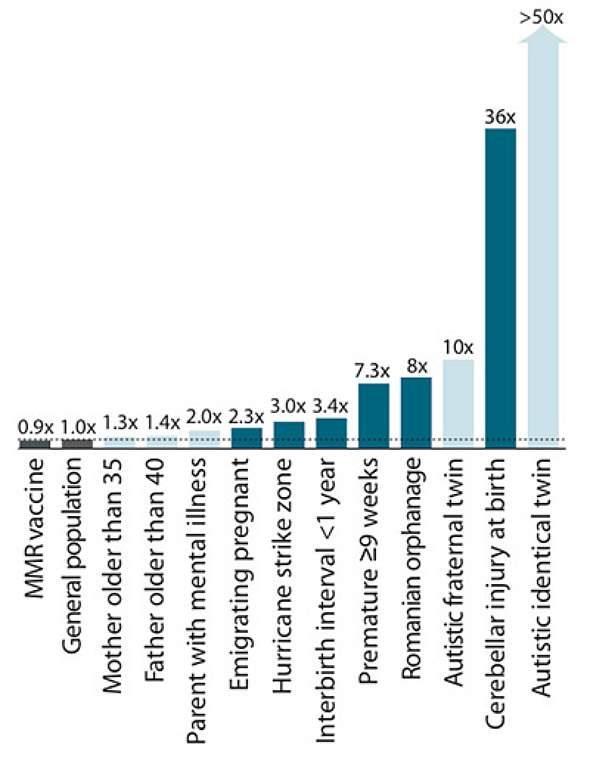 Based on a review of existing research, the researchers found that a cerebellar injury at birth can make a person 36 times more likely to score highly on autism screening tests, and is the largest un-inherited risk. Credit: Princeton University

"The association between cerebellar deficits and autism has been around for a while," Sahin said. "What Sam Wang and colleagues do in this perspective article is to synthesize these two themes and hypothesize that in a critical period of development, cerebellar dysfunction may disrupt the maturation of distant neocortical circuits, leading to cognitive and behavioral symptoms including autism."

Traditionally, the cerebellum has been studied in relation to motor movement and coordination in adults. Recent studies, however, strongly suggest that it also influences childhood cognition, Wang said. Several studies also have found a correlation between cerebellar injury and the development of a disorder in the autism spectrum, the researchers report. For instance, the researchers cite a 2007 paper in the journal Pediatrics that found that individuals who experienced cerebellum damage at birth were 40 times more likely to score highly on autism screening tests. They also reference studies in 2004 and 2005 that found that the cerebellum is the most frequently disrupted brain region in people with autism.

"What we realized from looking at the literature is that these two problems — autism and cerebellar injury — might be related to each other" via the cerebellum's influence on wider neural development, Wang said. "We hope to get people and scientists thinking differently about the cerebellum or about autism so that the whole field can move forward."

The researchers conclude by suggesting methods for testing their theory. First, by inactivating brain-cell electrical activity, it should be possible to pinpoint the developmental stage in which injury to one part of the brain affects the maturation of another. A second, more advanced method is to reconstruct the neural connections between the cerebellum and other brain regions; the federal BRAIN Initiative announced in 2013 aims to map the activity of all the brain's neurons. Finally, mouse brains can be used to disable and restore brain-region function to observe the "upstream" effect in other areas.