Researchers Stop Migraines in Their Tracks

When migraine sufferers see the tell-tale squiggly lines, light flashes and blind spots of a migraine aura, they prepare for a migraine. When researchers see the brain image of an aura, they try to figure out what causes it and if there is a way to stop the start of the migraine. Now an international team of researchers has identified the electrical activity specific to the start of migraines and demonstrated a way to stop it in animal experiments.

"Seizures and migraines are two very different states of the brain," said Steven J. Schiff, Brush Chair Professor of Engineering in the Departments of Neurosurgery, Engineering Science and Mechanics, and Physics, Penn State. "We found that the spreading depolarization, also called spreading depression, seen in migraines is a fundamental biophysical phenomenon and you can stop it with electrical current. Strangely, it is the opposite direction of electrical current used to turn off seizures."

Schiff, who is director of Penn State's Center for Neural Engineering, and his team have not cured migraines, but they are closer to understanding the mechanism in the brain that causes the start, or auras, of these headaches, which affect about 10 percent of men and 22 percent of women, according to the Center for Disease Control. 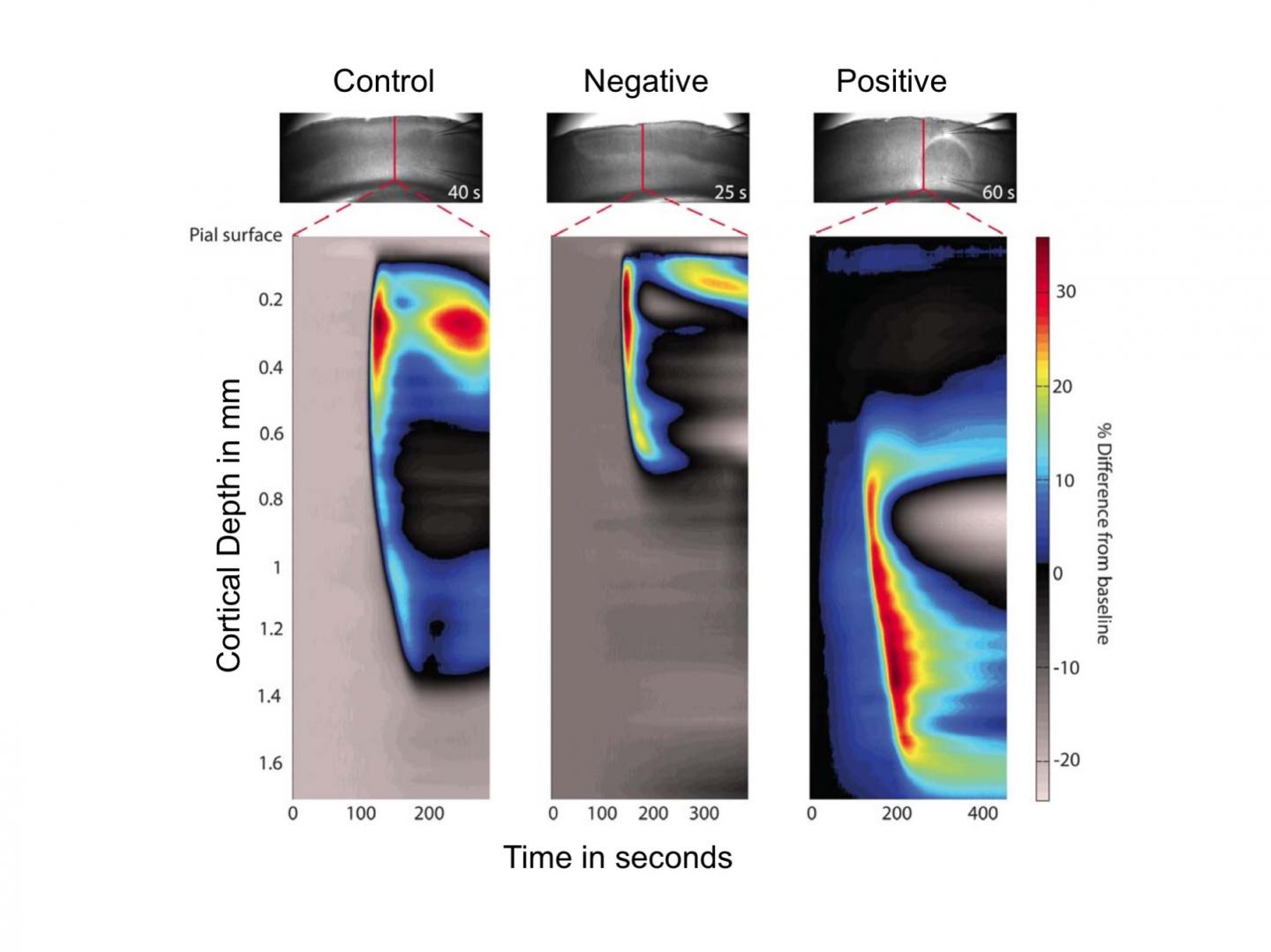 Optical images of the wave of spreading depolarization in the brain, left, the speeding up and drawing to the surface of the wave with negative current, middle, and the confinement of the wave with arrest of the propagation on the right. Credit: Steven Schiff, Penn State

"The electrical activity in the brain causing the aura is like a rolling blackout," said Andrew J. Whalen, postdoctoral scholar, Center for Neural Engineering, Penn State. "It's not just a single cell, but a chain reaction that moves across the brain causing swelling, and it takes people a while to recover."

Many migraine sufferers first experience this visual aura before the headache begins. Schiff and his team targeted the electrical activity that causes the aura as it is fundamental in starting the migraine.

Researchers know that changing the salt concentration in the brain can alter the electrical processes of the brain. By altering the potassium concentrations in the brain, the researchers could trigger spreading depolarization. The brain cells involved have a central body called the soma and a long, antenna-like arm called the dendrite. The two ends allow the researchers to polarize the cells with an electrical current -- positive charges accumulate at one end and negative charges accumulate at the other. This allows them to use an electrical current to try to modulate brain cell activity.

"We thought that if we stopped the initial phase, the aura, we would stop the rest," said Schiff. "We finally figured out that the charge necessary to stop the spreading depression was opposite to what we assumed. Once we chose the opposite charge, the progression of the phenomena stopped. This all made sense in the end, since seizures and migraines start at opposite ends of the brain cells."

The researchers were able to use a positive charge to stop the spreading polarization. Imaging of the rat brain slices shows the migraine activity moving deeper into the brain where it can no longer propagate, effectively ending the episode.

Applying polarization such as this can be safely done in the human brain, and this strategy can be tested in clinical trials with migraine sufferers. However, the full migraine experienced by patients becomes more complicated after the initial aura.

"One wants to be able to fix the brain so that it is not susceptible to migraines or seizures," said Bruce J. Gluckman, professor of engineering science and mechanics, neurosurgery and bioengineering and associate director of the Center for Neural Engineering. "Not to have to control migraines or spreading depression once it starts. For now, this is a fundamental result that moves us closer to being able to intervene in an important way for this condition."

This article has been republished from materials provided by Penn State University. Note: material may have been edited for length and content. For further information, please contact the cited source.