Recent published research in the Journal of Clinical Investigation demonstrates how changes in dopamine signaling and dopamine transporter function are linked to neurological and psychiatric diseases, including early-onset Parkinsonism and attention deficit hyperactivity disorder (ADHD).

"The present findings should provide a critical basis for further exploration of how dopamine dysfunction and altered dopamine transporter function contribute to brain disorders" said Michelle Sahai, a postdoctoral associate at the Weill Cornell Medical College of Cornell University, adding "it also contributes to research efforts developing new ways to help the millions of people suffering."

Sahai is also studying the effects of cocaine, a widely abused substance with psychostimulant effects that targets the dopamine transporter. She and her colleagues expect to release these specific findings within the next year.

Dopamine is a neurotransmitter that plays an important role in our cognitive, emotional, and behavioral functioning. When activated from outside stimuli, nerve cells in the brain release dopamine, causing a chain reaction that releases even more of this chemical messenger.

To ensure that this doesn't result in an infinite loop of dopamine production, a protein called the dopamine transporter reabsorbs the dopamine back into the cell to terminate the process. As dopamine binds to its transporter, it is returned to the nerve cells for future use.

However, cocaine and other drugs like amphetamine, completely hijack this well-balanced system.

"When cocaine enters the bloodstream, it does not allow dopamine to bind to its transporter, which results in a rapid increase in dopamine levels," Sahai explained.

The competitive binding and subsequent excess dopamine is what causes euphoria, increased energy, and alertness. It also contributes to drug abuse and addiction.

To further understand the effects of drug abuse, Sahai and other researchers in the Harel Weinstein Lab at Cornell are delving into drug interactions on a molecular level.

Using supercomputer resources, she is able to observe the binding of dopamine and various drugs to a 3D model of the dopamine transporter on a molecular level. According to Sahai, the work requires very long simulations in terms of microseconds and seconds to understand how drugs interact with the transporters.

"XSEDE-allocated resources are fundamental to helping us understand of how drugs work. There's no way we could perform these simulations on the machines we have in house. Through TACC as an XSEDE service provider, we can also expect an exponential increase in computational results, and good customer service and feedback."

Ultimately, Sahai's research will contribute to an existing body of work that is attempting to develop a cocaine binding inhibitor without suppressing the dopamine transporter.

"If we can understand how drugs bind to the dopamine transporter, then we can better understand drug abuse and add information on what's really important in designing therapeutic strategies to combat addiction," Sahai said.

A Common Link in the Research

While Sahai is still working to understand drug abuse, her simulations of the dopamine transporter have contributed to published research on Parkinson's disease and other neurological disorders.

In a collaborative study with the University of Copenhagen, Copenhagen University Hospital, and other research groups in the U.S. and Europe, researchers revealed the first known link between de novo mutations in the dopamine transporter and Parkinsonism in adults.

The study found that mutations can produce typical effects including debilitating tremors, major loss of motor control, and depression. The study also provides additional support for the idea that dopamine transporter mutations are a risk factor for attention deficit hyperactivity disorder (ADHD). 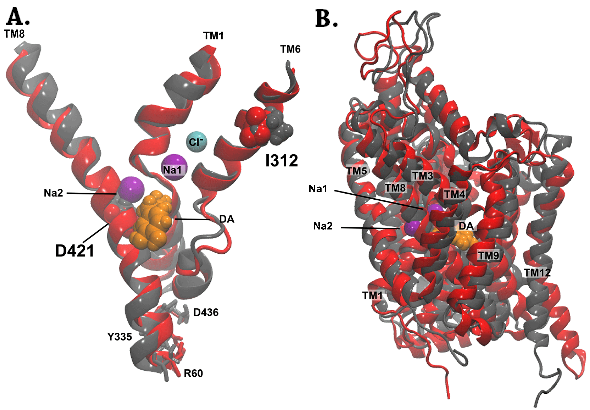 Because of the complexity of the human dopamine transporter structure, the models used to investigate the effects of drugs of abuse and neurological disorders are based on similar crystal structures from the bacterial transporter, LeuT (grey) and the Drosophila melanogaster fly (red). This image shows the superimposition of those molecular models and their binding sites and the location of two of the mutations in the dopamine transporter identified in the published work. Credit: University of Texas at Austin, Texas Advanced Computing Center

"This research is very important to me," Sahai said. "I was able to look at the structure of the dopamine transporter on behalf of experimentalists and understand how irregularities in this protein are harming an actual person, instead of just looking at something isolated on a computer screen."

While there is currently no cure for Parkinson's disease, a deeper understanding of the specific mechanisms behind it will help the seven to ten million people afflicted with the disease.

"Like my work on drug abuse, the end goal is thinking about how we can help people. And it all comes back to drug design," Sahai said.