Brain cancer patients may live longer thanks to a new cancer-detection method developed by researchers at the Montreal Neurological Institute and Hospital – The Neuro, at McGill University and the McGill University Health Centre (MUHC), and Polytechnique Montréal. The collaborative team has created a powerful new intraoperative probe for detecting cancer cells. The hand-held Raman spectroscopy probe enables surgeons, for the first time, to accurately detect virtually all invasive brain cancer cells in real time during surgery. The probe is superior to existing technology and could set a new standard for successful brain cancer surgery.

“Often it is impossible to visually distinguish cancer from normal brain, so invasive brain cancer cells frequently remain after surgery, leading to cancer recurrence and a worse prognosis,” says Dr. Kevin Petrecca, Chief of Neurosurgery and brain cancer researcher at The Neuro, and co-senior author of the study published in Science Translational Medicine. “Surgically minimizing the number of cancer cells improves patient outcomes.”

Designed and developed in partnership with Dr. Frédéric Leblond, Professor in Engineering Physics at Polytechnique Montréal, and co-senior author of the study, the probe technique uses laser technology to measure light scattered from molecules. “The emitted light provides a spectroscopic signal that can be interpreted to provide specific information about the molecular makeup of the interrogated tissue,” says Dr. Leblond. “The Raman spectroscopy probe has a greater than 92% accuracy in identifying cancer cells that have invaded into normal brain.” 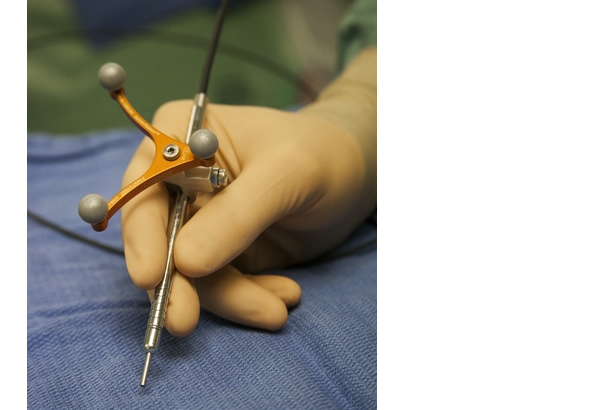 In order to show that the use of this system improves patient outcomes, a clinical trial at the Montreal Neurological Institute and Hospital will be launched for patients with newly diagnosed and recurrent glioblastoma. If positive, this portable intraoperative Raman Spectroscopy probe will improve brain cancer surgeries and in turn extend survival times for brain cancer patients.