Complete the form below and we will email you a PDF version of "Reward, aversion behaviors activated through same brain pathways??"

New research may help explain why drug treatments for addiction and depression don't work for some patients.

The findings suggest that drug treatments for addiction and depression simultaneously may stimulate reward and aversion responses, resulting in a net effect of zero in some patients.

The research is published in the journal Neuron.

"We studied the neurons that cause activation of kappa opioid receptors, which are involved in every kind of addiction -- alcohol, nicotine, cocaine, heroin, methamphetamine," said principal investigator Michael R. Bruchas, PhD, associate professor of anesthesiology and neurobiology. "We produced opposite reward and aversion behaviors by activating neuronal populations located very near one another. This might help explain why drug treatments for addiction don't always work -- they could be working in these two regions at the same time and canceling out any effects."

Addiction can result when a drug temporarily produces a reward response in the brain that, once it wears off, prompts an aversion response that creates an urge for more drugs. 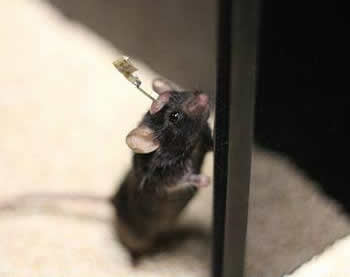 A mouse wears a wireless LED device that can activate cells in the brain to produce either reward or aversion responses. Credit: Bruchas laboratory

The researchers studied mice genetically engineered so that some of their brain cells could be activated with light. Using tiny, implantable LED devices to shine a light on the neurons, they stimulated cells in a region of the brain called the nucleus accumbens, producing a reward response. Cells in that part of the bran are dotted with kappa opioid receptors, which are involved in addiction and depression.

The mice returned over and over again to the same part of a maze when the researchers stimulated the brain cells to produce a reward response. But activating cells a millimeter away resulted in robust aversion behavior, causing the mice to avoid these areas.

"We were surprised to see that activation of the same types of receptors on the same types of cells in the same region of the brain could cause different responses," said first author Ream Al-Hasani, PhD, an instructor in anesthesiology. "By understanding how these receptors work, we may be able to more specifically target drug therapies to treat conditions linked to reward and aversion responses, such as addiction or depression."