Pain typically has a clear cause–but not always. When a person touches something hot or bumps into a sharp object, it’s no surprise that it hurts. But for people with certain chronic pain disorders, including fibromyalgia and phantom limb pain, a gentle caress can result in agony.

In a major breakthrough, a team led by researchers at the Salk Institute and Harvard Medical School have identified an important neural mechanism in the spinal cord that appears to be capable of sending erroneous pain signals to the brain.

By charting the spinal circuits that process and transmit pain signals in mice, the study, published in Cell, lays the groundwork for identifying ways to treat pain disorders that have no clear physical cause.

“Until now, the spinal cord circuitry involved in processing pain has remained a black box,” says Martyn Goulding, Salk professor in the Molecular Neurobiology Laboratory and a co-senior author of the paper. “Identifying the neurons that make up these circuits is the first step in understanding how chronic pain stems from dysfunctional neural processing.”

In many instances, people who suffer from chronic pain are sensitive to stimuli that don’t normally cause pain, such as a light touch to the hand or a subtle change in skin temperature. These conditions, referred to generally as forms of allodynia, include fibromyalgia and nerve damage that is caused by diseases such as diabetes, cancer and autoimmune disorders. 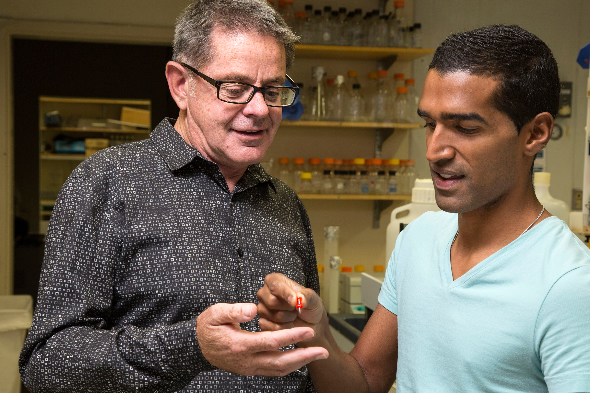 In other instances, the mysterious pain arises after amputation of a limb, which often leads to discomfort that seems to be centered on the missing appendage. These sensations often subside in the months following the amputation, but may linger indefinitely, causing long-term chronic pain for the sufferer.

“These disorders are extremely frustrating for patients, because there is still no effective treatment for such chronic pain disorders,” says Qiufu Ma, a professor of neurobiology at Harvard Medical School and co-senior author on the paper.

Scientists have long theorized that pain signals are sent from sensory neurons in the limbs and other extremities to transmission neurons in the spinal cord, which then relay the information to the brain. At each of these three steps–extremities, spinal cord and brain–the pain information can be altered or even blocked before being relayed onward through the nervous system to the brain. The circuitry in the spinal cord is particularly important, as it is able to gate painful stimuli, thereby acting as a checkpoint between the body and the brain to make sure that only the most important pain signals are transmitted.

Previous studies had determined that two types of sensory neurons appeared to be involved in these circuits: pain receptors and touch receptors.

In their new study, the Salk and Harvard researchers set out to precisely identify the spinal neurons involved in these circuits. They deciphered the role each of two neuronal cell types play in the processing of pain signals in the dorsal horn, the location where the sensory neurons connect with the spinal cord.

This finding begins to explain how a light touch can cause discomfort in someone with allodynia: if something is awry in the pain circuitry, then the sensations of touch that normally travels through the mechanoreceptors could instead activate other neurons that trigger a pain signal. Similarly, mechanoreceptor fibers that project to the spinal cord from a missing limb might spur erroneous pain signals.

“Normally, only pain receptors are involved in sending pain signals to the brain, but when the spinal dynorphin inhibitory neurons are lost, touch sensation are now perceived as painful,” says Goulding, holder of Salk’s Frederick W. and Joanna J. Mitchell Chair. “This really opens the door to understanding what’s happening in these pain disorders where the cause of the pain is seemingly innocuous or not known. It could be that something has gone awry in how this spinal circuitry is operating, so sensations become jumbled together and emerge as pain.”

The research was supported by the National Institut?es of Health and the Natural Science Foundation of China.