Fetuses with enlarged ventricles--the fluid-filled cavities inside the brain--may be less likely than their counterparts to benefit from surgery in the womb to treat spina bifida, according to a study supported by the US National Institutes of Health (NIH).

Researchers found that fetuses with enlarged ventricles were more likely to require a second surgery to relieve a life-threatening build-up of pressure within the brain. Given the risks that fetal surgery poses for mother and newborn, the findings indicate that, in these cases, it may be better to wait until after birth to perform the corrective spinal surgery. The scientists made this discovery by analyzing data from the NIH's Management of Myelomeningocele (MOMS) study.

Myelomeningocele is the most serious form of spina bifida, a condition in which the spinal column fails to close around the spinal cord. With myelomeningocele, the spinal cord protrudes through an opening in the spine. People with the condition often experience weakness or paralysis below the defect and may need a wheelchair or other assistive device to get around.

In 2011, MOMS researchers reported that surgically correcting the spinal defect while the fetus is in the womb greatly reduces the need to divert, or shunt, fluid away from the ventricles to relieve hydrocephalus, the life-threatening buildup of pressure inside the skull that sometimes accompanies myelomeningocele. 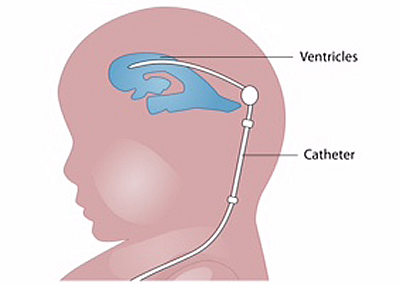 A blockage of the fluid inside the brain's ventricles can result in a life-threatening buildup of pressure inside the brain. To relieve the pressure, physicians may insert a shunt in the brain to divert the fluid to another part of the body. Credit: NIH / NICHD

In their recent analysis of data from the original MOMS study, the researchers found that fetuses who had larger ventricles were equally as likely to require placement of a shunt during the first year after birth, regardless of when they underwent the spinal repair surgery.

"These results indicate that physicians should proceed with caution before recommending in utero surgery for a fetus with enlarged ventricles," said Rosemary Higgins, M.D., of the Pregnancy and Perinatology Branch at NIH's Eunice Kennedy Shriver National Institute of Child Health and Human Development (NICHD), who oversaw the study.

The study appears in the Journal of Neurosurgery: Pediatrics. The study's first author is Noel B. Tulipan, M.D., of the Department of Neurosurgery and Pediatrics at Vanderbilt University Medical Center in Nashville, Tennessee.

The original MOMS study found that infants who had undergone the surgery before birth were more likely to walk without crutches or other devices. At 30 months of age, the fetal surgery group also had higher scores in tests of mental and motor development. However, as with any surgery, the procedure presented risks. Babies who underwent surgery in the uterus were more likely to be born preterm than were those who had the surgery after birth. Additionally, mothers in the fetal surgery group were at risk for having the surgical scar on the uterus tear or rupture during subsequent pregnancies.

"A major rationale for performing the surgery is to avoid having to place a shunt later on," Dr. Higgins said. "If it's likely that a second surgery will be needed anyway, then it doesn't appear that the potential benefits of an initial fetal surgery outweigh the risks."

In the current analysis, researchers tabulated the results in a single, composite outcome, to highlight the differences between treatment and control groups. The primary combined outcome for this analysis was whether a child had died, had a shunt placed in the first year after birth, or met the study's criteria for when to place a shunt. Dr. Higgins explained that when the researchers began the original study, there were no formal recommendations for shunt placement, so the researchers developed a set of objective criteria to guide the treatment of patients in the study.