Complete the form below and we will email you a PDF version of "See-through, one-atom-thick, carbon electrodes are a powerful tool for studying epilepsy, other brain disorders, study finds"

Researchers from the Perelman School of Medicine and School of Engineering at the University of Pennsylvania and The Children's Hospital of Philadelphia have used graphene -- a two-dimensional form of carbon only one atom thick -- to fabricate a new type of microelectrode that solves a major problem for investigators looking to understand the intricate circuitry of the brain.

Pinning down the details of how individual neural circuits operate in epilepsy and other neurological disorders requires real-time observation of their locations, firing patterns, and other factors, using high-resolution optical imaging and electrophysiological recording. But traditional metallic microelectrodes are opaque and block the clinician’s view and create shadows that can obscure important details. In the past, researchers could obtain either high-resolution optical images or electrophysiological data, but not both at the same time.

The Center for NeuroEngineering and Therapeutics (CNT), under the leadership of senior author Brian Litt, PhD, has solved this problem with the development of a completely transparent graphene microelectrode that allows for simultaneous optical imaging and electrophysiological recordings of neural circuits.  Their work was published this week in Nature Communications.

Aside from the obvious benefits of its transparency, graphene offers other advantages: "It can act as an anti-corrosive for metal surfaces to eliminate all corrosive electrochemical reactions in tissues," Kuzum says. "It's also inherently a low-noise material, which is important in neural recording because we try to get a high signal-to-noise ratio."

While previous efforts have been made to construct transparent electrodes using indium tin oxide, they are expensive and highly brittle, making that substance ill-suited for microelectrode arrays.  "Another advantage of graphene is that it's flexible, so we can make very thin, flexible electrodes that can hug the neural tissue," Kuzum notes.

In the study, Litt, Kuzum, and their colleagues performed calcium imaging of hippocampal slices in a rat model with both confocal and two-photon microscopy, while also conducting electrophysiological recordings. On an individual cell level, they were able to observe temporal details of seizures and seizure-like activity with very high resolution. The team also notes that the single-electrode techniques used in the Nature Communications study could be easily adapted to study other larger areas of the brain with more expansive arrays. 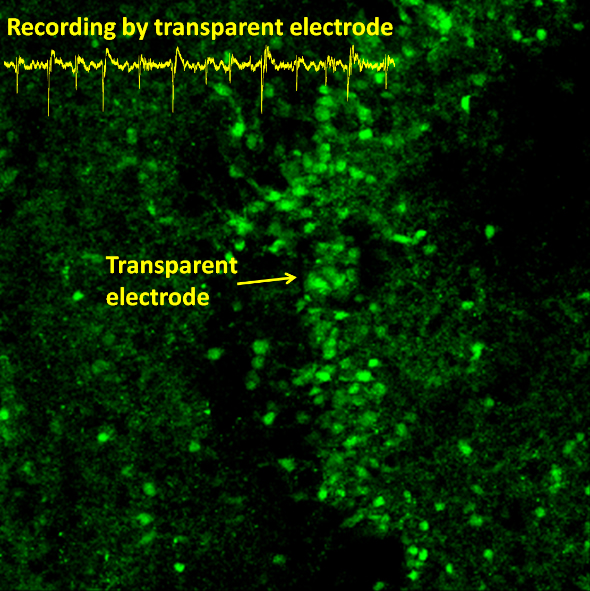 The graphene microelectrodes developed could have wider application. "They can be used in any application that we need to record electrical signals, such as cardiac pacemakers or peripheral nervous system stimulators," says Kuzum.  Because of graphene's nonmagnetic and anti-corrosive properties, these probes “can also be a very promising technology to increase the longevity of neural implants.” Graphene's nonmagnetic characteristics also allow for safe, artifact-free MRI reading, unlike metallic implants.

Kuzum emphasizes that the transparent graphene microelectrode technology was achieved through an interdisciplinary effort of CNT and the departments of Neuroscience, Pediatrics, and Materials Science at Penn and the division of Neurology at CHOP.

As the technology is further developed and used, Kuzum and her colleagues expect to gain greater insight into how the physiology of the brain can go awry. "It can provide information on neural circuits, which wasn't available before, because we didn't have the technology to probe them," she says.  That information may include the identification of specific marker waveforms of brain electrical activity that can be mapped spatially and temporally to individual neural circuits.  "We can also look at other neurological disorders and try to understand the correlation between different neural circuits using this technique," she says.