The 60 trillion cells that comprise our bodies communicate constantly.  Information travels when chemical compounds released by some cells are received by receptors in the membrane of another cell. In a paper published in the Journal of Neuroscience, the Okinawa Institute of Science and Technology (OIST) Cell Signal Unit, led by Professor Tadashi Yamamoto, reported that mice lacking an intracellular trafficking protein called LMTK3, are hyperactive.  Hyperactivity is a behavioral disorder that shows symptoms including restlessness, lack of coordination, and aggressive behavior.  Identifying the genetic factors that contribute to such behaviors may help to explain the pathological mechanisms underlying autism and Attention Deficit Hyperactivity Disorder, ADHD, in humans.

LMTK3 is abundant in two brain regions: the cerebral cortex, which coordinates perception, movement, and thought, and the hippocampus, which governs memory and learning.  In the brain, neurons communicate via connections called synapses. To send a message, a nerve terminus in the pre-synapse releases neurotransmitters to be received by the post-synaptic receptors.  Yamamoto’s team discovered that LMTK3 regulates trafficking of neurotransmitter receptors at synapses.  In neurons of mice deficient in LMTK3, internalization of receptors are augmented in the post-synapse, suggesting that synaptic communication is impaired. The LMTK3-deficient mice exhibited various hyperactive behaviors such as restlessness and hypersensitivity to sound.  Interestingly, their dopamine levels were elevated.  Dopamine is a neurotransmitter known to be involved in regulation of movement and hormone levels, motivation, learning, and expression of emotion.  Excessive dopamine secretion results in schizophrenia, causing a loss of integrity of neuronal activity, and abnormal thoughts and emotions.  The relationships between regulation of neurotransmitter receptor expression by LMTK3, dopamine turnover, and the biochemical pathways that induce hyperactivity, remain unknown. 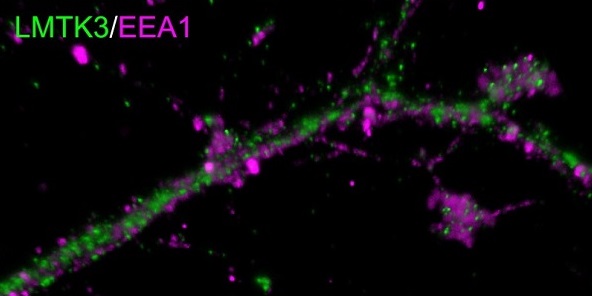 Neurotransmitter receptors are withdrawn into the post-synaptic cell, where they are transported via membranous cell components called early endosomes (EEAs). This figure shows that LMTK3 is closely located with these EEAs, although the exact nature of that relationship is unknown. LMTK3 is shown in green and EEA1 is shown in red. Credit: OIST

Functions of many human proteins are still not understood.  The Cell Signal Unit continues genetic studies of intracellular proteins that maintain and regulate complex functions such as behaviors, through their activities inside cells.  “We hope to advance our research in order to elucidate genetic defects that result in behavioral abnormalities,” Yamamoto said.