The way in which toys are handled and combined with one another during object play can tell use a lot about the cognitive underpinnings of the actors. Object-object combinations, such as placing one toy on top of another can even be considered precursors of technically complex behaviors such as the use of tools. An international team of scientists around Alice Auersperg from the Department of Cognitive Biology at the University of Vienna presented parrot species as well as crow species with the same set of toys and found out that the birds willingly brought objects into complex spatial relationships: Behaviors that occur in only a few species of primates.

The ways animals play with inedible objects may be precursors of functional behaviors such as tool use and goal directed object manipulation. For these reasons, species of high technical intelligence are also expected to play intensely with inanimate objects when no obvious goal is pursued. Within object play, combinatory actions are considered a particularly informative trait in animals as well as human infants: Children start bashing two objects together when they are about 8 months old, at 10 months, they combine toys with elements from their environment, such as inserting them into cavities or stacking rings on a pole. Only after their second year, infants start using objects as tools to obtain a desired goal. In animals this has so far mainly been studied in primates. Within this group, complex object combinations during play are largely limited to capuchin monkeys and the four great ape species. These are also the species, which prominently stand among primates, for their innovative tool use abilities. Interestingly, within birds, the crow family as well as parrots have similar relative forebrain body sizes as the great apes and also perform at similar levels in many cognitive tasks. 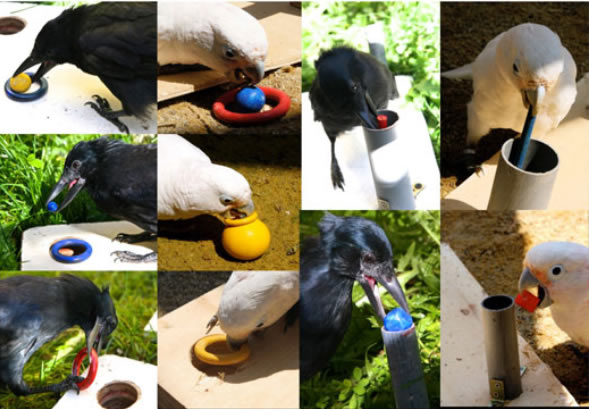 To investigate the play behavior of parrots and crows researchers confronted groups of three crow species as well as a total of nine parrot species with an identical set of wooden toddler toys of different shape and colour categories as well as with a 'playground' offering various tubes and holes for insertions and poles for stacking rings. Whereas animals of most species interacted with the toys, complex object-object combinations were largely limited to a subset of the species.  The frequency of playfully combining two free toys was highest in New Caledonian crows within crows and in Goffin cockatoos, Black Palm cockatoos and Kea within parrots. Goffins and New Caledonian crows even combined up to three toys. "New Caledonian crows are innate tool users and also the only crow known to regularly use and manufacture different types of foraging tools in the wild", says Alice Auersperg from the University of Vienna who organized the study: "The Black Palm cockatoos are also habitual tool users, with the males using wooden logs as drum sticks to attract females to potential breeding sites and to deter competitors. The Goffin cockatoo as well as the kea, although not innate tool users, have both repeatedly demonstrated the capacity for innovative and flexible tool use as well as high-level performances in problem solving tasks involving object manipulations in captivity". 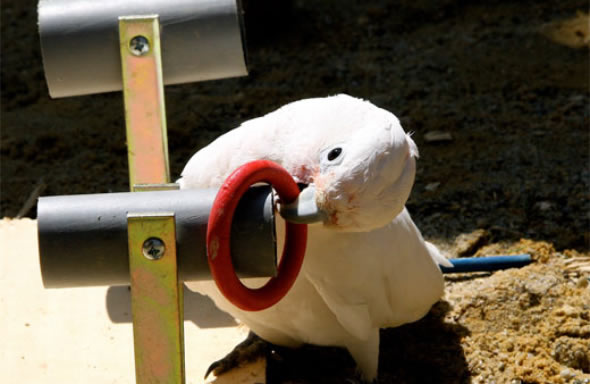 Again, only the aforementioned species also combined their toys with the tubes and poles of the playground at high rates. "Inserting behaviors occurred most frequently in New Caldonian crows, followed by Palm cockatoos and Goffin cockatoos, again, consistently with their tool use capacities", says Auguste von Bayern from the University of Oxford. Only parrots stacked rings onto poles and tubes, the Goffin cockatoos notably more often than other species. "Fitting a frame over a fixed shape is likely to occur less frequently in natural situations than fitting a shape into a fixed frame and it may require a higher level of motor control", adds von Bayern. The cockatoos even stacked the rings onto, or pulled them over, free stick-shaped objects, which is technically more challenging than if either frame or shape are fixed terms of beak foot coordination.

"Our findings parallel previous findings in primates", says Alice Auersperg: "This further implies that some abilities substrates in large brained birds and primates may have evolved convergently". Thomas Bugnyar from the University of Vienna concludes: "Our findings support the view that species that readily bring objects into complex spatial relationships with each other during play may be more likely to express flexible and innovative solutions to novel technical challenges in a problem solving context".