Published: May 15, 2018
| Original Story by Stuart Wolpert for UCLA
News

UCLA biologists report they have transferred a memory from one marine snail to another, creating an artificial memory, by injecting RNA from one to another. This research could lead to new ways to lessen the trauma of painful memories with RNA and to restore lost memories.

“I think in the not-too-distant future, we could potentially use RNA to ameliorate the effects of Alzheimer’s disease or post-traumatic stress disorder,” said David Glanzman, senior author of the study and a UCLA professor of integrative biology and physiology and of neurobiology. The team’s research is published May 14 in eNeuro, the online journal of the Society for Neuroscience.

RNA, or ribonucleic acid, has been widely known as a cellular messenger that makes proteins and carries out DNA’s instructions to other parts of the cell. It is now understood to have other important functions besides protein coding, including regulation of a variety of cellular processes involved in development and disease. 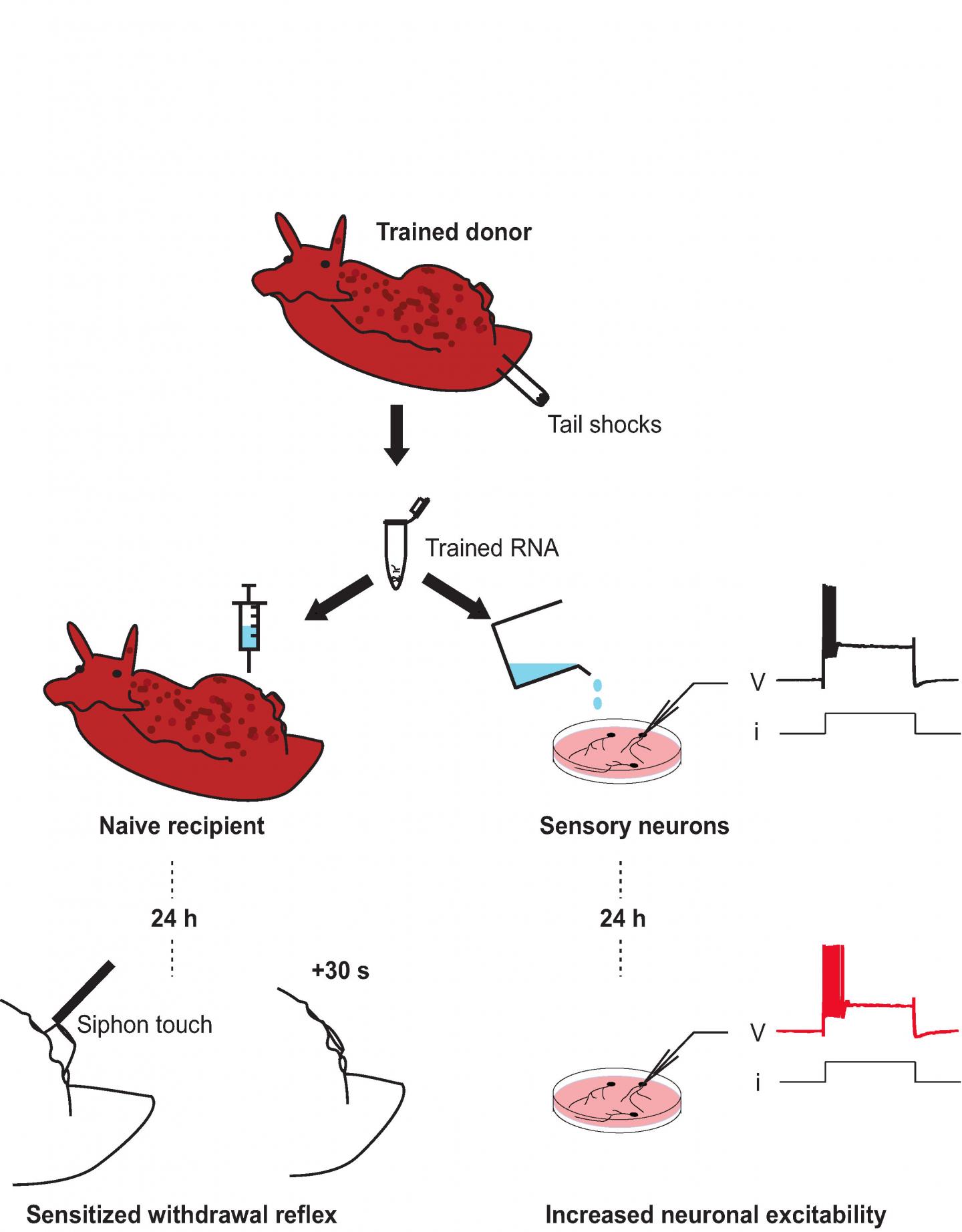 Memories can be transferred between organisms by extracting ribonucleic acid (RNA) from a trained animal and injecting it into an untrained animal, as demonstrated in a study of sea snails published in eNeuro. The research provides new clues in the search for the physical basis of memory. Bédécarrats et al., eNeuro (2018)

The researchers gave mild electric shocks to the tails of a species of marine snail called Aplysia. The snails received five tail shocks, one every 20 minutes, and then five more 24 hours later. The shocks enhance the snail’s defensive withdrawal reflex, a response it displays for protection from potential harm. When the researchers subsequently tapped the snails, they found those that had been given the shocks displayed a defensive contraction that lasted an average of 50 seconds, a simple type of learning known as “sensitization.” Those that had not been given the shocks contracted for only about one second.

Remarkably, the scientists found that the seven that received the RNA from snails that were given the shocks behaved as if they themselves had received the tail shocks: They displayed a defensive contraction that lasted an average of about 40 seconds.

“It’s as though we transferred the memory,” said Glanzman, who is also a member of UCLA’s Brain Research Institute.

As expected, the control group of snails did not display the lengthy contraction.

“If memories were stored at synapses, there is no way our experiment would have worked,” said Glanzman, who added that the marine snail is an excellent model for studying the brain and memory.

Scientists know more about the cell biology of this simple form of learning in this animal than any other form of learning in any other organism, Glanzman said. The cellular and molecular processes seem to be very similar between the marine snail and humans, even though the snail has about 20,000 neurons in its central nervous system and humans are thought to have about 100 billion.

In the future, Glanzman said, it is possible that RNA can be used to awaken and restore memories that have gone dormant in the early stages of Alzheimer’s disease. He and his colleagues published research in the journal eLife in 2014 indicating that lost memories can be restored.

There are many kinds of RNA, and in future research, Glanzman wants to identify the types of RNA that can be used to transfer memories.

This article has been republished from materials provided by UCLA. Note: material may have been edited for length and content. For further information, please contact the cited source.