Complete the form below and we will email you a PDF version of "The Social Psychology of Nerve Cells: Researchers explore the genetic underpinnings of nerve-cell spacing"

The functional organization of the central nervous system depends upon a precise architecture and connectivity of distinct types of neurons. Multiple cell types are present within any brain structure, but the rules governing their positioning, and the molecular mechanisms mediating those rules, have been relatively unexplored.

A new study by UC Santa Barbara researchers demonstrates that a particular neuron, the cholinergic amacrine cell, creates a "personal space" in much the same way that people distance themselves from one another in an elevator. In addition, the study, published in the Proceedings of the National Academy of Sciences, shows that this feature is heritable and identifies a genetic contributor to it, pituitary tumor-transforming gene 1 (Pttg1).

Patrick Keeley, a postdoctoral scholar in Benjamin Reese's laboratory at UCSB's Neuroscience Research Institute, has been using the retina as a model system for exploring such principles of developmental neurobiology. The retina is ideal because this portion of the central nervous system lends itself to such spatial analysis. 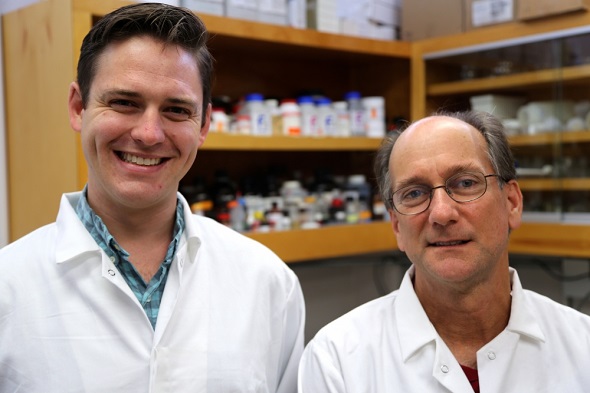 "Populations of neurons in the retina are laid out in single strata within this layered structure, lending themselves to accurate quantitation and statistical analysis," explained Keeley. "Rather than being distributed as regular lattices of nerve cells, populations in the retina appear to abide by a simple rule, that of minimizing proximity to other cells of the same type. We would like to understand how such populations create and maintain such spacing behavior."

To address this, Keeley and colleagues quantified the regularity in the population of a particular type of amacrine cell in the mouse retina. They did so in 26 genetically distinct strains of mice and found that every strain exhibited this same self-spacing behavior but that some strains did so more efficiently than others. Amacrine cells are retinal interneurons that form connections between other neurons and regulate bipolar cell output.

"The regularity in the patterning of these amacrine cells showed little variation within each strain, while showing conspicuous variation between the strains, indicating a heritable component to this trait," said Keeley.

"This itself was something of a surprise, given that the patterning in such populations has an apparently stochastic quality to it," said Reese, a professor in the Department of Psychological and Brain Sciences. Stochastic systems are random and are analyzed, at least in part, using probability theory.

This strain variation in the regularity of this cellular patterning showed a significant linkage to a location in the genome on chromosome 11, where the researchers identified Pttg1, previously unknown to play any role in the retina.

Working in collaboration with colleagues at the University of Tennessee Health Science Center in Memphis, Keeley's team demonstrated that the expression of this gene varies across the 26 strains of mice and that there was a positive correlation between gene expression and regularity. They then identified a mutation in this gene that itself correlated with expression levels and with regularity. Working with colleagues at Cedars-Sinai Medical Center in Los Angeles, the team also demonstrated directly that this mutation controlled gene expression.

"Pttg1 has diverse functions, being an oncogene for pituitary tumors, and is known to have regulatory functions orchestrating gene expression elsewhere in the body," explained Keeley. "Within this class of retinal neurons, it should be regulating the way in which cells integrate signals from their immediate neighbors, translating that information to position the cell farthest from those neighbors." Future studies should decipher the genetic network controlled by Pttg1 that mediates such nerve-cell spacing.