Alzheimer's disease is the most significant cause of dementia in the elderly, affecting over 35 million people worldwide. It is reckoned that Alzheimer's could reach epidemic proportions in developed countries unless therapies to cure or prevent it are obtained. Studies conducted so far reveal that the therapies are more effective when they are applied before the brain has become severely damaged. What is more, the spotting of early phases of the disease may help to develop new treatments. Right now, to make a clinical diagnosis of Alzheimer's, medical examinations, neuropsychological tests, neuroimaging, cerebrospinal fluid analysis, and blood tests are carried out; all these tests are not only invasive but are very costly as well. So it seems that smart, non-invasive diagnostic techniques could be valuable tools for the early detecting of dementias.

What is known as Automatic Spontaneous Speech Analysis (ASSA) is one of the non-invasive techniques to help in detecting disorders relating to dementia that the UPV/EHU's multidisciplinary research group ELEKIN is working on. This methodology is based on the recording of patients while they are describing some experience in their own lives in a relaxed, leisurely atmosphere, and on the measuring of various parameters. For example, the pauses the patient makes when trying to remember the word he/she wants to say are measured. So the technique is carried out without altering or blocking the patient's abilities as he/she does not perceive the test as something stressful. 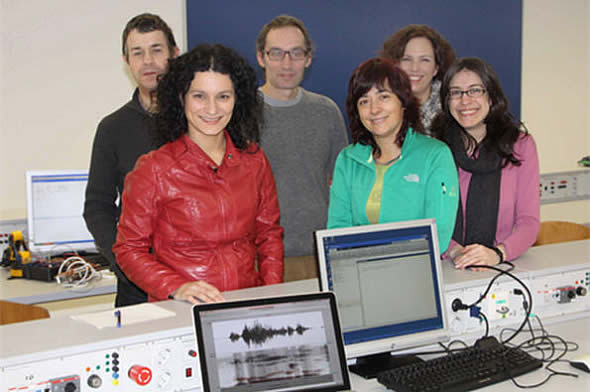 The ELEKIN group researchers. In the center, Karmele López de Ipiña, coordinator of the research group. Credit: University of the Basque Country

Can invasive tests be avoided?

This work has aimed to provide clinical professionals with tools enabling them to make diagnoses in a much less invasive way. "It's about quantifying elements or details that the health specialists can see at a glance. But if they have the accurate measurement, it can help them to diagnose disorders or carry out more exact out-patient follow-up," explained Karmele López de Ipiña, coordinator of the ELEKIN research group. As the researcher maintains, these measurements can be conducted by non-technical personnel in an atmosphere that is normal for the patient.

The following, among others, are collaborating in the study: associations of relatives of Alzheimer's patients, University of Vic, TecnoCampus Mataró (Pompeu Fabra University), Center for Biomedical Technology (Madrid), University of Las Palmas de Gran Canaria and CITA-Alzheimer, a centre for advanced research and therapies. The tests are conducted on people who have not developed the disease, on people who have a family history of it and on patients in collaboration with medical centres and while at all times abiding by ethical criteria and the corresponding protocols. Thanks to this collaboration "it is possible to study even the preclinical phase or people who have not yet started to develop the disease," pointed out Ipiña.

Much work is being done internationally in these lines of research, although the ASSA system is not yet being used because it is a technique still being developed and researched. "The moment will come when we have the system ready to be used routinely to assess patients," concluded Ipiña. "We want to provide doctors with tools to detect elements that cannot be seen at a glance. In this respect, the automatic analysis of these signals can help them."