A cell does everything it can to protect its nucleus, where precious genetic information is stored. That includes controlling the movement of molecules in and out using gateways called nuclear pore complexes (NPCs).

Scientists are paying close attention to this regulation since dysfunction in nuclear transport has been linked to many diseases, including cancers and developmental disorders.

While small molecules can easily pass in and out of the nucleus, the transport of large molecules such as proteins and RNA is more complex and less well understood. These are moved through the NPC rapidly, but also selectively to avoid allowing the wrong big molecules through. 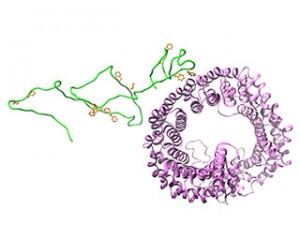 It was already known that proteins called transport factors bind to large cargo and escort it through the NPC. A team led by Michael P. Rout, a professor at Rockefeller University and head of the Laboratory of Cellular and Structural Biology, and David Cowburn, a professor of biochemistry and of physiology & biophysics at Albert Einstein College of Medicine, sought to explain the speed with which transport factors ferry large molecules across the NPC, a process that lasts only a few milliseconds.

“It’s understood how these transport factors selectively choose and bind to their cargo,” Rout says. “However, it’s been unclear how such a specific process can also shepherd molecules through the nuclear pore complex so quickly.”

At the center of the NPC, the transport factors and their cargo must pass through a selectivity filter made of proteins called FG Nups. These proteins form a dense mesh that normally prevents large molecules from getting through. Using a technique known as nuclear magnetic resonance spectroscopy, the researchers collected atomic-scale information about the behavior of the FG Nups, focusing on Nsp1, the most studied representative of the FG Nups.

The researchers measured the physical state of FG repeats with and without transport factors bound to them. They found that rather than folding like proteins generally do, the FG Nups are loose and string-like, remaining highly dynamic and lacking a predictable structure.

“Usually, binding between traditionally folded proteins is a time consuming, cumbersome process, but because the FG Nups are unfolded, they are moving very quickly, very much like small molecules. This means their interaction is very quick,” explains Rout.

The disordered structure of the FG regions is critical to the speed of transport, allowing for quick loading and unloading of cargo-carrying transport factors. At the same time, because transport factors have multiple binding sites for FG Nups, they are the only proteins that can specifically interact with them — making transport both fast and specific.

“We observed that there is minimal creation of a static well-ordered structure in complexes of FG Nups and transport factors,” says Cowburn. “Our observations are, we propose, the first case where the ‘fuzzy’ property of an interaction is a key part of its actual biological function.”

The team hopes this discovery will lead to detailed characterizations of nuclear transport pathways and to more close studies of the NPC’s function. Ultimately, a better understanding of how the NPC works will not only provide new insight into the basic biology of cells, but also have implications for health and disease.