Complete the form below and we will email you a PDF version of "Study: Noise-induced hearing loss alters brain responses to speech"

Prolonged exposure to loud noise alters how the brain processes speech, potentially increasing the difficulty in distinguishing speech sounds, according to neuroscientists at The University of Texas at Dallas.

In a paper published online this week in Ear and Hearing, researchers demonstrated for the first time how noise-induced hearing loss affects the brain’s recognition of speech sounds.

Noise-induced hearing loss (NIHL) reaches all corners of the population, affecting an estimated 15 percent of Americans between the ages of 20 and 69, according to the National Institute of Deafness and Other Communication Disorders (NIDCD).

Exposure to intensely loud sounds leads to permanent damage of the hair cells, which act as sound receivers in the ear. Once damaged, the hair cells do not grow back, leading to NIHL. 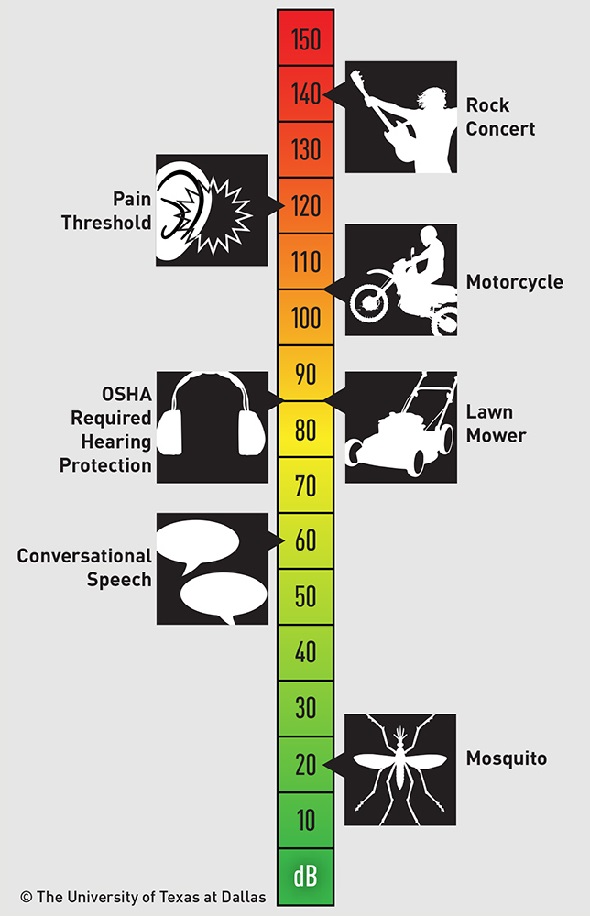 Regular exposure to sounds greater than 100 decibels for more than a minute at a time may lead to permanent hearing loss, according to the National Institute of Deafness and Other Communication Disorders.

“As we have made machines and electronic devices more powerful, the potential to cause permanent damage has grown tremendously,” said Dr. Michael Kilgard, co-author and Margaret Fonde Jonsson Professor in the School of Behavioral and Brain Sciences. “Even the smaller MP3 players can reach volume levels that are highly damaging to the ear in a matter of minutes.”

Before the study, scientists had not clearly understood the direct effects of NIHL on how the brain responds to speech.

For comparison, the American Speech-Language-Hearing Association lists the maximum output of an MP3 player or the sound of a chain saw at about 110 decibels and the siren on an emergency vehicle at 120 decibels. Regular exposure to sounds greater than 100 decibels for more than a minute at a time may lead to permanent hearing loss, according to the NIDCD.

Researchers observed how the two types of hearing loss affected speech sound processing in the rats by recording the neuronal response in the auditory cortex a month after the noise exposure. The auditory cortex, one of the main areas that processes sounds in the brain, is organized on a scale, like a piano. Neurons at one end of the cortex respond to low-frequency sounds, while other neurons at the opposite end react to higher frequencies.

In the group with severe hearing loss, less than one-third of the tested auditory cortex sites that normally respond to sound reacted to stimulation. In the sites that did respond, there were unusual patterns of activity. The neurons reacted slower, the sounds had to be louder and the neurons responded to frequency ranges narrower than normal. Additionally, the rats could not tell the speech sounds apart in a behavioral task they could successfully complete before the hearing loss.

In the group with moderate hearing loss, the area of the cortex responding to sounds didn’t change, but the neurons' reaction did. A larger area of the auditory cortex responded to low-frequency sounds. Neurons reacting to high frequencies needed more intense sound stimulation and responded slower than those in normal hearing animals. Despite these changes, the rats were still able to discriminate the speech sounds in a behavioral task.

“Although the ear is critical to hearing, it is just the first step of many processing stages needed to hold a conversation,” Kilgard said. “We are beginning to understand how hearing damage alters the brain and makes it hard to process speech, especially in noisy environments.”

The University of Texas at Dallas   press release