Everyday tasks we may think simple – for example, knowing the difference between the smell of an orange and a pickle – are actually marvels of evolutionary development, the work of eons. A neuroscience team at Cold Spring Harbor Laboratory (CSHL) reports in Neuron results of experiments that suggest how the mammalian brain distinguishes odors – not just dissimilar ones but, perhaps more importantly, odors that are nearly identical, such as the scents of oranges and tangerines.

Precise discrimination of olfactory signals from the environment is nothing less than a survival skill, more so for mice, our mammalian cousins, than for us. Mice have relatively poor vision, and it is only thanks to their other senses, notably their incredible ability to identify and discriminate odors, that they can successfully hunt for food or choose a mate. Understanding how they do this, in turn, sheds light on the workings of our much more complex, but structurally related, brains. 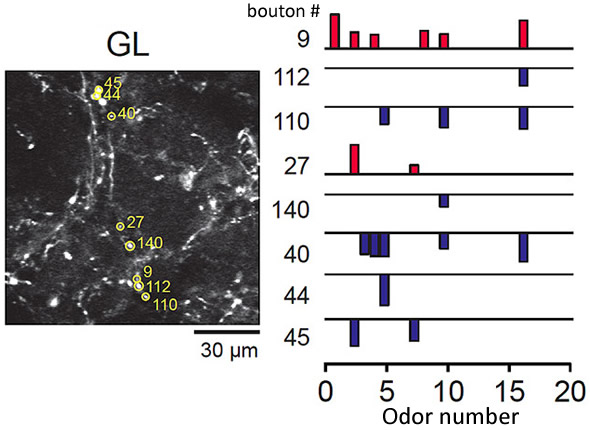 Feedback from the olfactory cortex spurs sparse, precise responses in the olfactory bulb: Fluorescent microscopy by Albeanu Lab (left image) shows activation in synaptic boutons – communication junctions – located less than one-tenth of a millimeter beneath the surface of the olfactory bulb of an awake mouse responding to a panel of 20 odorants.  Graph (right) shows that individual boutons (whose numbers correspond to circled boutons in the image) respond to a small fraction of the 20 odors, and that even adjacent boutons, like  numbers 27 and 140, respond to different odors and in different ways (red bars indicate the bouton’s activity is enhanced relative to baseline or resting state; blue bars indicate less activity relative to baseline). Credit: CSHL

Led by CSHL Assistant Professor Florin Albeanu, the team explored a function in the mouse brain that scientists still don’t know much about. After a mouse samples a smell by sniffing, and signals from that activity are gathered and subjected to preliminary processing in the animal’s olfactory bulb, the bulb sends “output” signals to the brain’s higher processing center, the cerebral cortex. Albeanu’s team focused on “feedback” -- the signal that the olfactory cortex, in turn, sends back to the olfactory bulb. While there are theories aplenty about the nature and purpose of this feedback signal, very little is known about it.

Even in the mouse brain, the feedback loop is a good deal more complex than just described. The olfactory bulb sends output to and receives feedback from multiple parts of the brain. Albeanu’s team focused on one such feedback loop: signals sent from two principal cell types in the bulb, called mitral cells and tufted cells. These signals travel over long-distance axons to various parts of the brain, but most prominently to the piriform cortex. That’s the brain’s primary center for higher olfactory processing.

Some theorists have speculated that the piriform cortex works as a pattern-recognition device that compares incoming sensory inputs with representations of previously experienced odors, stored up in memory. Not only is the piriform cortex thought to do this job; it is also involved in the integration of this information with contextual information (ranging from other data about the environment to whether the animal is hungry, amorous, afraid, etc.). Further, it is theorized that based on this data, the piriform cortex sends signals back to the olfactory bulb – feedback – that is essentially predictive, helping the animal to make decisions based on all available information. 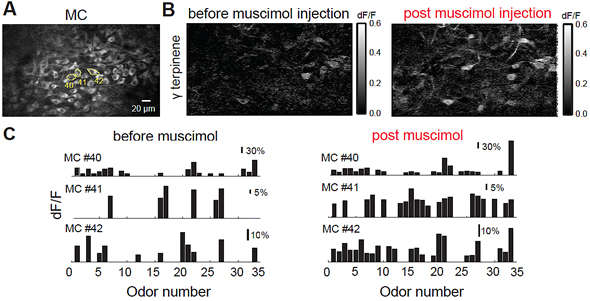 Removing cortical feedback blurs the response of cells in the olfactory bulb: Two-tenths of a millimeter beneath the surface of the mouse olfactory bulb, the average “resting” response of output neurons called mitral cells is shown via the fluorescent microscopy image at far left.  When a specific odor (γ-terpinene) is presented to the awake mouse, the change from resting state – indicated by increased or decreased brightness – is shown in the middle panel.  Many are dimmer; only a few are brighter, indicating increased response.  After injection of a drug that inactivates cortical feedback to the mitral cells, many more of the group show heightened activity.  As captured in the bar graphs below, the responses of three numbered mitral cells tend to overlap and look much more alike in the absence of cortical feedback (right side) than when feedback is present (left side).  This is evidence, according to CSHL scientists, suggesting that feedback is important in enabling an animal to discriminate among odors. Credit: CSHL

Albeanu’s team, which included co-first authors Drs. Gonzalo Otazu and Hongggo Chae, as well as technician Martin Davis, made a series of discoveries in two related sets of experiments that support some of these theories. In one set, as they exposed awake mice to a panel of about 30 odorants, one by one, they traced the axons projecting back to the olfactory bulb from the piriform cortex – the “wires,” in effect, that carry the feedback signal – and measured the responses of tiny button-like structures called synaptic boutons, the sites where these cortical feedback axons form connections, or synapses, in the bulb with local receiving neurons. These so-called interneurons are inhibitory.

“The idea was to image the responses of the boutons in the olfactory bulb to a set of odorants,” explains Albeanu. “It’s very hard to physically access the piriform cortex for optical imaging, so we used these boutons as a proxy to indicate the nature of the signal that the cortex is feeding back to the bulb.”

The results were “striking,” says Albeanu. First, it was clear that any given bouton responded only to a small fraction of the 30 odorants – perhaps two or three, on average. This is what neuroscientists call a “sparse” response, and it indicates specificity. This immediately cast doubt on an existing theory suggesting that the feedback to the bulb is non-specific and acts like the volume, or “gain,” control on an audio system. Rather, the response was specific and highly selective. Not only did a given bouton respond to very few odors; if it responded to one by amplifying the feedback signal (above the background level, since there is always activity in the circuit), it tended to perform that same function, amplification, on all of the odors it responded to. Conversely, those boutons that tamped down the signal coming back from the cortex tended to do that for all of the odors they responded to.

A second set of experiments enabled Albeanu’s team to offer a new hypothesis of the purpose of this particular cortical feedback. By injecting mice with a drug that inactivates the piriform cortex, they were able to examine the activity of the output cells in the olfactory bulb that normally integrate the cortical feedback via inhibitory interneurons. Again a striking result: as compared with their activity profiles when receiving feedback, mitral cells in the olfactory bulb tended to have overlapping responses when the feedback was cut off. In other words, their activity profiles started to look quite similar. This suggests that without feedback from the cortex, mitral cells are no longer able to supply the animal with information that can sharply distinguish odors, particularly odors that are chemically similar.

Taken together, the results lead Albeanu to propose that feedback from the cortex is highly specific, and likely used to create a useful representation of the animal’s environment, “in a very specific and selective fashion that, in turn, is used to extract the identity of a given odor and to separate it from other odors,” Albeanu says. The research continues now in experiments featuring animals that are actively engaged in odor discrimination in their environment, in order to obtain behavioral evidence to correlate with the results of the experiments published today.