It's time to rewrite the textbook description of bone fracture healing.

The findings shift understanding of how fractures heal and have implications for efforts to promote fracture repair.

"Many of the current pharmaceutical protocols are based on using fibrin to promote fracture healing," said Jonathan Schoenecker, M.D., Ph.D., assistant professor of Orthopaedic Surgery and Rehabilitation. "In certain instances it may help, but we've shown for sure that you don't need it. Bone biology does not require fibrin to heal a fracture."

Fibrin is involved in blood clotting; it forms a meshlike net that traps platelets to form a clot. When bones break, so do blood vessels, and clots form to stop the bleeding. 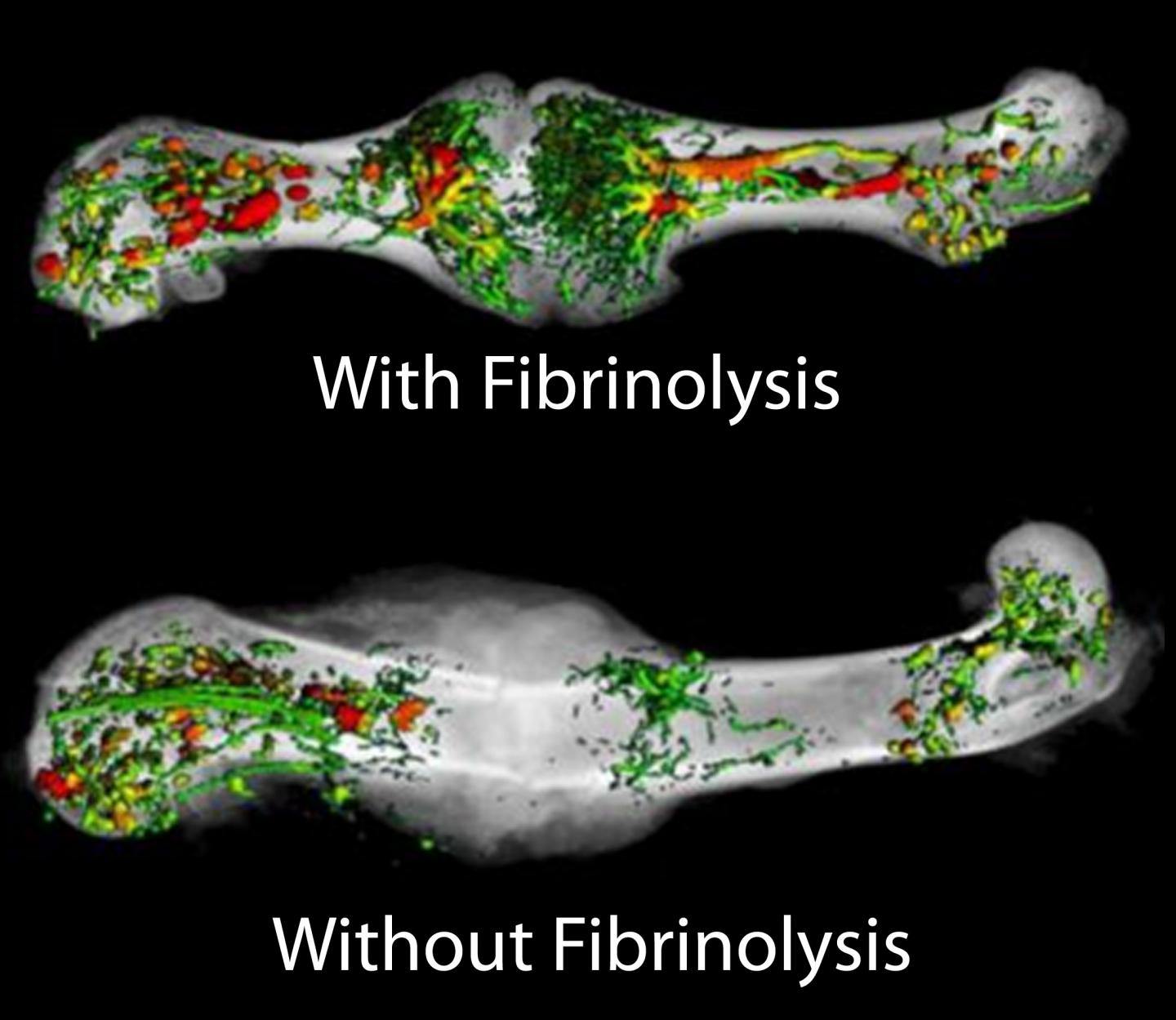 "Most people don't realize that bone is the most vascular organ in our bodies," Schoenecker said. "When you have a fracture, you have a huge disruption of that vascularity."

Since fibrin is the main protein at the site of a fracture, it was thought to promote repair by providing a scaffold for the initial phase of new bone formation. Schoenecker and colleagues found, however, that fracture repair was normal in mice missing the fibrin precursor fibrinogen.

The investigators had previously reported the importance of vascular re-connection for bone fracture healing. Using imaging techniques they developed to simultaneously study angiogenesis (new blood vessel growth) and bone formation after fracture, they found that blood vessels grow first at the ends of the fracture, extend and reconnect. Then new bone forms.

It follows that if fibrin is not efficiently removed, it gets in the way, he said. In the new studies, the team demonstrated that mice missing the factor that clears fibrin had impaired vascularization and bone union. Genetic manipulations to deplete fibrinogen in these mice restored normal fracture repair.

"Fibrin puts a cog in the machine and you don't get the anastomosis (vessel reconnection)," Schoenecker said.

The findings may explain why obesity, diabetes, smoking and advanced age impair fracture repair. They are all associated with impaired fibrin clearance, he explained.

The findings may also explain why children heal so quickly - because their fibrinogen levels are about half the levels in an adult.

"If we could lower fibrinogen levels - or increase the activity of enzymes that get rid of fibrin - we could make adult patients more like kids and improve healing," Schoenecker said.

In the current studies, the investigators also found that mice unable to clear fibrin formed bone in muscle - a condition called heterotopic ossification that can complicate healing after trauma and orthopaedic surgery.

"It was totally unexpected that fibrin clearance is essential to prevent heterotopic ossification," Schoenecker said.

Schoenecker and his team are working toward "orthobiologics" to reduce fibrin levels or enhance fibrin clearance and improve fracture healing. They are also working to improve the mechanical devices - such as rods and plates - used in orthopaedic surgeries, so that those devices don't disrupt the ability of blood vessels to grow and reconnect.

"The link between coagulation (clotting) and orthopaedics has been observed for more than a century, as such big injuries of an incredibly vascular structure inevitably require a clot in order not to bleed to death," Schoenecker said. "But the understanding that the resolution of this clot has such an impact on the way a bone heals is completely new."

He points out that some of the medications developed for cardiovascular medicine - to prevent clotting - may find new purposes in enhancing tissue repair and regeneration.