An interdisciplinary team of scientists from The Hong Kong University of Science and Technology (HKUST) has discovered the mechanism of how human brains turn on and off neuronal activities, providing an important foundation to understand a wide range of neurologic conditions such as epilepsy, Parkinson’s disease and ataxia-telangiectasia diseases.

“As with all things in life, healthy brain function depends on a balance of neuronal activities. We think of our brains as active – moving a leg and saying a word are all “active” events, but it is just as important that our brains be able to stop these actions,” said Cheng Aifang, a postgraduate student from the Division of Life Science who made the discovery under the guidance of the division’s head and Chair Professor Karl Herrup. “Yet it was not clear how our brains actually perform this go/stop function until now.”

The team discovered that the brain balances excitation and inhibition through regulating ATM and ATR – large kinase enzymes, levels.  In pathological conditions, when ATM levels drop for example, ATR levels increase, vice versa.  In addition, the team also discovered that ATM only regulates excitatory synaptic vesicles while ATR is responsible for only the inhibitory ones.  This is achieved by controlling the movement of these tiny synaptic vesicles in the neuronal synapse – the gap between two neurons that regulates information flow in the brain. 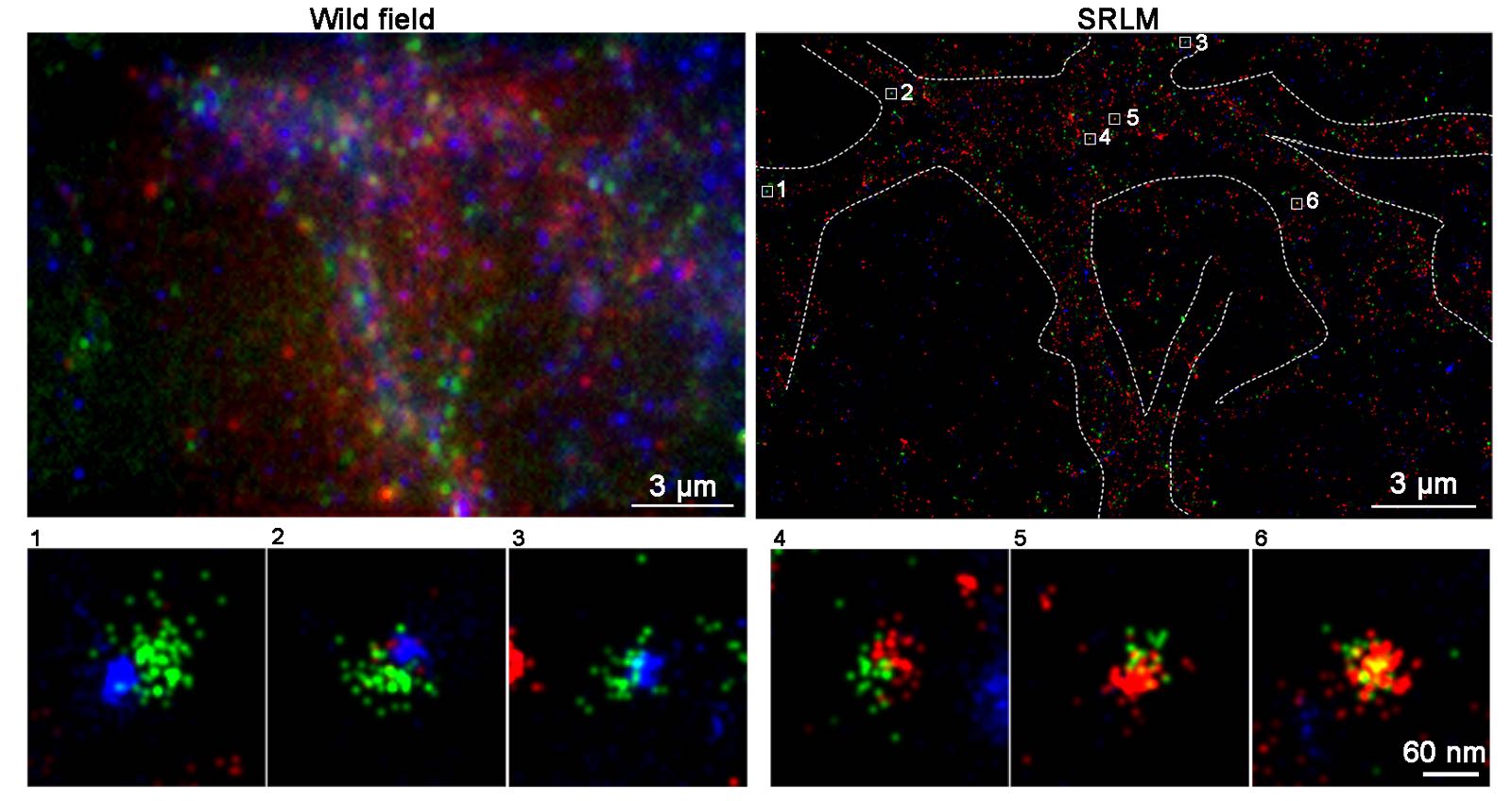 Images taken by HKUST’s SRLM microscope (upper right – break down to 1-6) are much sharper than those by regular ones (upper left), allowing researchers to discover for the first time that ATM (blue) and ATR (red) were never found on the same synaptic vesicle (green).

“The discoveries are in the realm of basic research, but they have important implications for human disease” said Prof Karl Herrup, also director of the Super-Resolution Imaging Center (SRIC). “Epilepsy, for example, is a condition where one of the problems is that inhibition fails. As our findings would predict, humans with too little ATR have a problem with epilepsy, while people with ATM deficiency by contrast are ataxic – a reduced ability to make finely controlled movements and keep the proper E/I ratio. This means that there is a yin-yang relationship between ATM and ATR.  And this is only the beginning. We believe that our work has potential relevance to a much broader range of neurologic conditions.”

The findings were published in the Journal Proceedings of the National Academy of Science earlier this month.

“One of the challenges we faced was that even at high magnification, all vesicles look pretty much alike,” said Prof Du Shengwang, physics professor and Associate Director of SRIC.  “To provide differentiation, we developed a three-color version of our super-resolution system, which allowed the team to prove that ATM and ATR were never found on the same VAMP2-containing synaptic vesicle.”

This article has been republished from materials provided by Hong Kong University of Science and Technology. Note: material may have been edited for length and content. For further information, please contact the cited source.