Complete the form below and we will email you a PDF version of "Suspect gene corrupts neural connections: 'Diseases of synapses' demonstrated in a dish"

Researchers have long suspected that major mental disorders are genetically-rooted diseases of synapses – the connections between neurons. Now, investigators supported in part by the National Institutes of Health have demonstrated in patients' cells how a rare mutation in a suspect gene disrupts the turning on and off of dozens of other genes underlying these connections.

"Our results illustrate how genetic risk, abnormal brain development and synapse dysfunction can corrupt brain circuitry at the cellular level in complex psychiatric disorders," explained Hongjun Song, Ph.D. , of Johns Hopkins University, Baltimore, a grantee of the NIH's National Institute of Mental Health (NIMH), a funder of the study.

Song and colleagues, from universities in the United States, China, and Japan, report on their discovery in the journal Nature, August 18, 2014.

Most major mental disorders, such as schizophrenia, are thought to be caused by a complex interplay of multiple genes and environmental factors. However, studying rare cases of a single disease-linked gene that runs in a family can provide shortcuts to discovery. Decades ago, researchers traced a high prevalence of schizophrenia and other major mental disorders – which often overlap genetically – in a Scottish clan to mutations in the gene DISC1 (Disrupted In Schizophrenia-1). But until now, most of what's known about cellular effects of such DISC1 mutations has come from studies in the rodent brain.

To learn how human neurons are affected, Song's team used a disease-in-a-dish technology called induced pluripotent stem cells (iPSCs). A patient's skin cells are first induced to revert to stem cells. Stem cells play a critical role in development of the organism by transforming into the entire range of specialized cells which make up an adult. In this experiment, these particular "reverted" stem cells were coaxed to differentiate into neurons, which could be studied developing and interacting in a petri dish. This makes it possible to pinpoint, for example, how a particular patient's mutation might impair synapses. Song and colleagues studied iPSCs from four members of an American family affected by DISC1-linked schizophrenia and genetically related mental disorders. 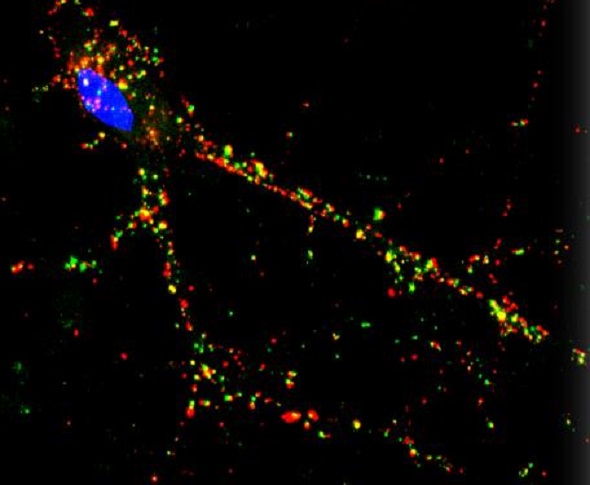 Strikingly, iPSC-induced neurons, of a type found in front brain areas implicated in psychosis, expressed 80 percent less of the protein made by the DISC1 gene in family members with the mutation, compared to members without the mutation. These mutant neurons showed deficient cellular machinery for communicating with other neurons at synapses.

The researchers traced these deficits to errant expression of genes known to be involved in synaptic transmission, brain development, and key extensions of neurons where synapses are located. Among these abnormally expressed genes were 89 previously linked to schizophrenia, bipolar disorder, depression, and other major mental disorders. This was surprising, as DISC1's role as a hub that regulates expression of many genes implicated in mental disorders had not previously been appreciated, say the researchers.