Ruairi is a senior science writer at Technology Networks. He holds a Master's degree in clinical neurosciences from the University of Cambridge and has written for Technology Networks since 2018.
Learn about our editorial policies
Credit: Heidi Jacobs
Read time:

The locus coeruleus (LC) is a minuscule region of the brain that plays an outsized role in how our central nervous system functions. The LC’s name comes from the Latin for blue spot, its noticeable hue a product of intense chemical activity. This activity produces the brain’s primary source of the vitally important neurotransmitter, norepinephrine, which controls our “fight-or-flight” response to stimuli in our environment, and plays roles in our sleep-wake cycle and emotional regulation.

A new study, published in Science Translational Medicine, suggests changes in the LC might provide a novel way of indicating the early spread of Alzheimer’s disease through the brain.

The study was published by a collaborative group of researchers including Dr. Heidi Jacobs, an assistant professor at the Gordon Center for Medical Imaging at Massachusetts General Hospital. First author Jacobs spoke to Technology Networks about the difficulties in studying this region. “It’s very deep in the brain, located in the pons. It’s a really hard region to image with standard magnetic resonance imaging (MRI) tools because it’s so low. In the scanner, the coils that go over your head end up just below the pons so that the signal that you are capturing becomes noisy.

Alzheimer’s disease, the most common cause of dementia, is thought to be fueled by the spread of two pathological proteins – amyloid beta (Aβ) and the microtubule-associated protein tau. The characteristic impairment that Alzheimer’s causes to memory and learning is thought to be a result of its impact on regions of higher learning in the brain, such as the hippocampus and cortex. So why is the LC, tucked away in the lower regions of the brainstem, a region of interest?

To overcome the challenges in studying the LC, Jacobs and her team used new advances in MRI – imaging at an enhanced resolution of 0.3 mm. As we age, the MRI signal intensity in the LC increases, as the activity of the region produces endogenous toxins that are then stored away in measurable pigmented cells. However, the early onset of tau accumulation is thought to damage these pigmented cells, resulting in an impaired signal that could be picked up by the team’s ultra-sensitive MRI. 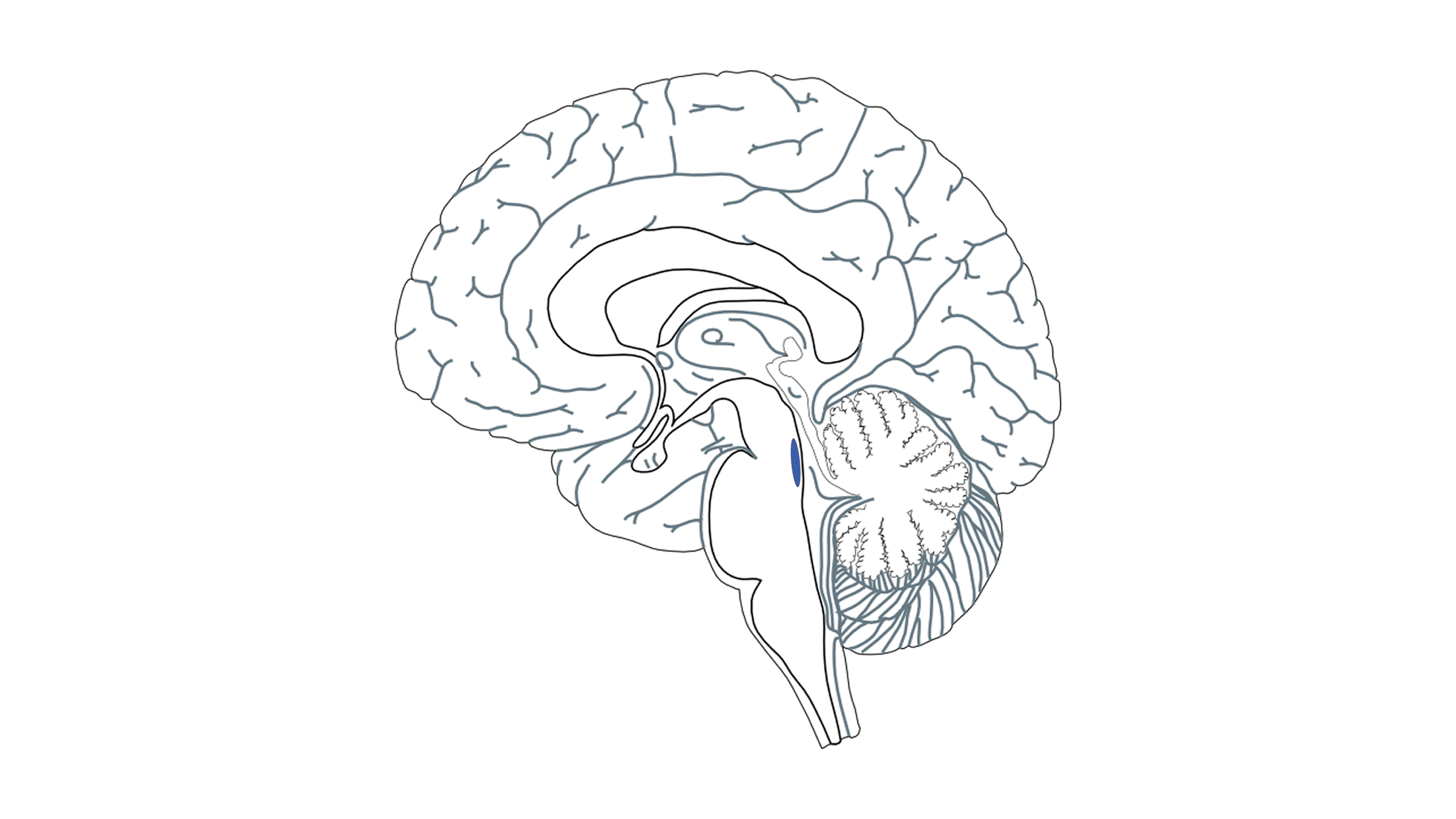 A sagittal-section of the brain (seen from the side of the head) reveals the locus coeruleus, indicated in blue. Credit: Heidi Jacobs

In their study, Jacobs’ team used a vast array of data. 221 patients from the Harvard Brain Aging Study (HABS) were recruited for MRI imaging and two post-mortem datasets – 1524 case records from the Religious Orders Study and Rush Memory and Aging Project (ROSMAP) and 2145 case records from the National Alzheimer’s Coordinating Center (NACC) – were also utilized. These latter data had been previously assessed for the level of LC damage and Alzheimer’s pathology in higher brain regions.

Jacobs’s team showed that reductions in LC integrity were a key indicator of higher levels of tau protein accumulation in the entorhinal cortex. Increases in tau neurofibrillary tangles in the LC were associated with worse cortical pathology rating, called Braak staging, while reduction in pigmentation of the LC was associated with later Braak stages.

Importantly, says Jacobs, the disease processes that most strongly related to the LC were those at the earliest stages of Alzheimer’s disease, a sign that assessment of the LC could be used as a predictor for later disease spread.

A final experiment showed that reduced integrity of the LC is associated with a more rapid decline in memory and executive function – key symptoms of Alzheimer’s disease.

“What we’ve shown is that the integrity of the LC is associated with these initial cortical patterns of tau pathology and cognitive decline,” says Jacobs. She explains that some researchers had believed changes in the LC were simply indicators of healthy aging, but these new findings show that the MRI signal could instead be an early biomarker of Alzheimer’s.

By providing an indication of disease risk decades before symptom onset, the LC signal, hopes Jacobs, could make for more successful clinical trials where early intervention is thought to be crucial to success. “We need to go earlier, and I think this is where the clinical implication of this work lies,” Jacobs concludes.