A tool to help brain surgeons test and more precisely remove cancerous tissue was successfully used during surgery, according to a Purdue University and Brigham and Women's Hospital study.

The Purdue-designed tool sprays a microscopic stream of charged solvent onto the tissue surface to gather information about its molecular makeup and produces a color-coded image that reveals the location, nature and concentration of tumor cells.

"In a matter of seconds this technique offers molecular information that can detect residual tumor that otherwise may have been left behind in the patient," said R. Graham Cooks, the Purdue professor who co-led the research team. "The instrumentation is relatively small and inexpensive and could easily be installed in operating rooms to aid neurosurgeons. This study shows the tremendous potential it has to enhance patient care."

Current surgical methods rely on the surgeon's trained eye with the help of an operating microscope and imaging from scans performed before surgery, Cooks said.

"Brain tumor tissue looks very similar to healthy brain tissue, and it is very difficult to determine where the tumor ends and the normal tissue begins," he said. "In the brain, millimeters of tissue can mean the difference between normal and impaired function. Molecular information beyond what a surgeon can see can help them precisely and comprehensively remove the cancer."

The mass spectrometry-based tool had previously been shown to accurately identify the cancer type, grade and tumor margins of specimens removed during surgery based on an evaluation of the distribution and amounts of fatty substances called lipids within the tissue. This study took the analysis a step further by additionally evaluating a molecule associated with cell growth and differentiation that is considered a biomarker for certain types of brain cancer, he said.

"We were able to identify a single metabolite biomarker that provides information about tumor classification, genotype and the prognosis for the patient," said Cooks, the Henry Bohn Hass Distinguished Professor of Chemistry. "Through mass spectrometry all of this information can be obtained from a biopsy in a matter of minutes and without significantly interrupting the surgical procedure."

For this study, which included validation on samples and use during two patients’ surgical procedures, the tool was tuned to identify the lipid metabolite 2-hydroxyglutarate or 2-HG. This biomarker is associated with more than 70 percent of gliomas and can be used to classify the tumors, he said.

In mass spectrometry molecules are electrically charged and turned into ions so that they can be identified by their mass. The new tool relies an ambient mass spectrometry analysis technique developed by Cooks and his colleagues called desorption electrospray ionization, or DESI, which eliminated the need for chemical manipulations of samples and containment in a vacuum chamber for ionization. DESI allows ionization to occur directly on surfaces outside of the mass spectrometers, making the process much simpler, faster and more applicable to surgical settings. 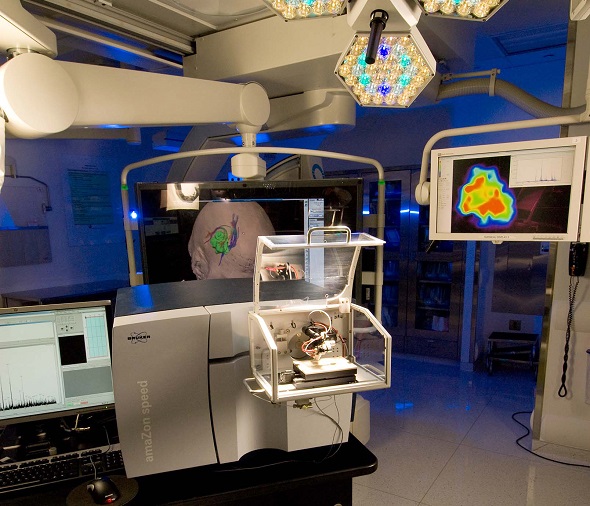 The mass spectrometer portion of a Purdue-designed tool that assists brain surgeons in identification of tumor margins and cancerous tissue. Courtesy of Brigham and Women's Hospital

The tool couples a DESI mass spectrometer with a software program designed by the research team that uses the results to characterize the brain tumors and detect boundaries between healthy and cancerous tissue.  The program is based on earlier studies of lipid patterns that correspond to different types and grades of cancer and currently covers the two most common types of brain tumors, gliomas and meningiomas. These two types of tumors combined account for about 65 percent of all brain tumors and 80 percent of all malignant brain tumors, according to the American Brain Tumor Association.

Additional classification methodologies and metabolite biomarkers could be added to tailor the tool to different types of cancer, Cooks said.

The brain surgery was performed in the Advanced Multi-Modality Image Guided Operating suite, or AMIGO at Brigham and Women's Hospital.

Dr. Nathalie Agar, director of the Surgical Molecular Imaging Laboratory within the neurosurgery department at Brigham and Women's Hospital, led the study.