In a collaboration led by EPFL’s Blue Brain, scientists discover patterns of brain activity – never before observed – with the help of mathematics, providing insight into how neurons collectively process information.

Brains of healthy rats that are the same age share many features, such as similar numbers and types of neurons present in the six layers of the cortex. But how do neurons exchange information? Which neurons are activated? How does this change with time?

To answer these questions, a team of scientists led by EPFL’s Blue Brain Project used the mathematical language of algebraic topology to describe just how rat neurons connect to each other – and respond to stimuli – providing the first geometrical insight into how information is processed in a rodent brain. The results are published in the open-access journal Frontiers in Computational Neuroscience.

"Our previous mathematical approaches struggled to make sense of the activity generated by neurons,” says EPFL neuroscientist Henry Markram who leads the Blue Brain Project. “When we map the activity into high dimensional geometries the activity starts to make sense - this exciting collaboration has opened a completely new door to understanding the brain. " 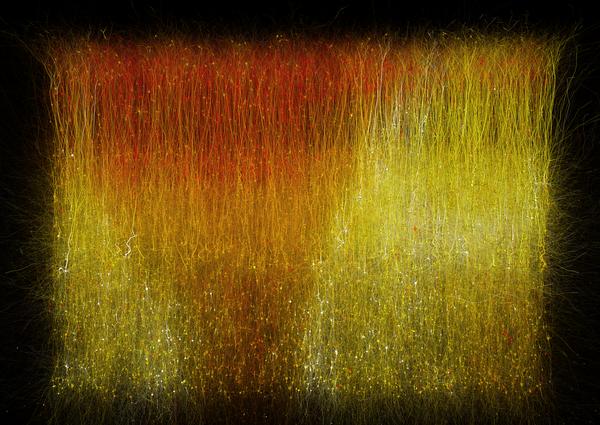 Conducting virtual experiments on Blue Brain’s digital reconstruction of a microcircuit in the rat brain, a computer model consisting of 31 000 neurons – and a whopping 8 million connections – all based on physiological data, the scientists discovered and described quantitatively the astonishingly rich geometric organization of neurons, providing a new and powerful tool for understanding the brain. The way neurons network together can actually be described using multi-dimensional mathematical objects. Moreover, these objects respond to external stimuli with a characteristic pattern through time, never before observed.

Neurons are organized according to abstract shapes

The scientists focused their attention on families of neurons, called “cliques”, consisting of neurons that are all connected with each other, pair-by-pair, taking into account the direction in which signals are transmitted from one neuron to the next. They found that neurons are very often pairwise connected in families of three or four, confirming experimental observations in the wet lab using small samples of rodent brain tissue. But they also noticed that larger sized cliques were possible, connecting together up to eight neurons in the rodent virtual microcircuit.

The mathematical representation of these pairwise-connected neurons looks like connect-the-dots, with neurons at the dots and connections represented by lines. Each line is given a direction, indicating the way signals flow from one neuron to the next. The number of neurons in a pairwise-connected family determines the shape of the clique, so that two linked neurons form a straight line, three neurons a flat, filled-in triangle, four neurons a 3-dimensional, solid pyramid, and five neurons and more leading to higher dimensional polyhedrons. So the clique consisting of 8 neurons corresponds to a polyhedron of 7 dimensions.

“To a topologist the brain is like a gigantic network with dots - neurons - and pathways - connections among them. From that it is quite natural to infer the geometric structures built out of cliques,” says topologist Ran Levi of the University of Aberdeen. “What is so amazing about this project is how relevant these techniques are to understanding both structure and function in the brain. The abundance of information we inferred from this approach is incredible.”

From a physiological perspective, though, the linked neurons are actually spread across the different layers of the rodent brain, making these cliques difficult to visualize in situ. Moreover, every neuron belongs to a very large numbers of cliques.

Characteristic pattern in response to stimuli

With this abstract classification of neurons in place, the scientists observed – for the very first time – recurrent patterns when subjecting the virtual rodent microcircuit to external stimuli. It is well known that only certain parts of the brain are activated in response to a given stimulus, but how signals propagate through the brain and through which neurons is a mystery, on which this research has shed light.

Flicking the virtual rodent’s whiskers, the scientists stimulated activity in the microcircuit and observed which cliques are activated and how this evolves through time. Regardless of the type of stimulus, the activated cliques assemble together to form cavities of various dimensions, which the scientists then tracked through time. They noticed that these cavities always appear, first in low dimensions, then in increasingly higher dimensions, as the information is processed by the virtual microcircuit, until all of the cavities finally abruptly disintegrate.

“As an algebraic topologist, it's very exciting for me to see the tools of my trade enable the detection and description of the incredibly rich, highly organized structure hidden in the seemingly chaotic firing patterns of neurons, a structure which was invisible until we looked through this particular mathematical filter,” says EPFL mathematician Kathryn Hess.

These findings suggest that the brain constantly rewires as it processes information, building a network with as many high-dimensional structures as possible, ultimately collapsing when a decision has been made. The scientists are now looking into whether more intricate tasks give rise to more complex patterns of cavities.