A new device which transforms paralysis victims' breath into words -- believed to be the first invention of its kind -- has been developed by academics from Loughborough University.

Billed as a tool to help bring back the art of conversation for sufferers of severe paralysis and loss of speech, the prototype analyzes changes in breathing patterns and converts 'breath signals' into words using pattern recognition software and an analog-to-digital converter. A speech synthesizer then reads the words aloud.

The Augmentative and Alternate Communication (AAC) device is designed for patients with complete or partial loss of voluntary muscle control who don't have the ability to make purposeful movements such as sniffing or blinking -- gestures which previous AAC devices have come to rely upon.

Dr David Kerr, Senior Lecturer in the School of Mechanical and Manufacturing Engineering, and Dr Kaddour Bouazza-Marouf, Reader in Mechatronics in Medicine, said the device learns from its user, building up its knowledge as it goes. It allows the user to control how he or she wishes to communicate -- effectively enabling them to create their own language by varying the speed of their breathing. The academics have been joined in the project by Dr Atul Gaur, Consultant Anesthetist at Glenfield Hospital.

"What we are proposing is a system that learns with the user to form an effective vocabulary that suits the person rather than the machine," said Dr Kerr. 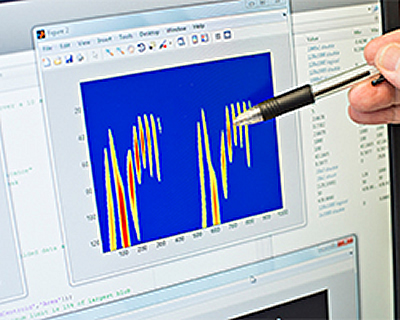 "When it comes to teaching our invention to recognize words and phrases, we have so far recorded a 97.5 per cent success rate. Current AAC devices are slow and range from paper-based tools to expensive, sophisticated electronic devices. Our AAC device uses analog signals in continuous form, which should give us a greater speed advantage because more information can be collected in a shorter space of time."

Dr Gaur added: "This device could transform the way people with severe muscular weakness or other speech disorders communicate. In an intensive care setting, the technology has the potential to be used to make an early diagnosis of locked-in syndrome (LIS), by allowing patients, including those on ventilators, to communicate effectively for the first time by breathing -- an almost effortless act which requires no speech, limb or facial movements."

The trio will be joined by Loughborough mechanical engineering student Robert Green, 20, who will work alongside them on the device as part of his final year individual project. Robert is no stranger to AAC devices, having already invented a prototype called the m(eye)DAQ -- a low cost digital letter board that allows victims of paralysis to communicate via eye blinks or finger movements.