Two New Subtypes of Schizophrenia Have Been Discovered

Two New Subtypes of Schizophrenia Have Been Discovered

An international team led by researchers from the University of Pennsylvania has published research identifying two distinct subtypes of the complex neurological disorder schizophrenia. The authors say that their findings could lead to more personalized treatment of the condition. Their study is published in Brain.

Schizophrenia is a complex neurological condition characterized by disorganized thinking, difficulty concentrating, hallucinations, and delusions. Affecting up to 1% of people worldwide, the cause and disease mechanisms of schizophrenia are not well understood.

The present study, led by principal investigator Christos Davatzikos, PhD, the Wallace T. Miller professor of radiology in the Perelman School of Medicine at the University of Pennsylvania, examined the brain anatomy of people with schizophrenia. Davatzikos’s team used a large, diverse sample of volunteers that spanned three continents. Working with researchers in Germany, Italy, and the UK, they analyzed the brains of 307 schizophrenia patients and 364 healthy people included as controls.

Can the brain look normal in schizophrenia?

The team’s resulted identified a split in their patients that surprised the authors. “Numerous other studies have shown that people with schizophrenia have significantly smaller volumes of brain tissue than healthy controls. However, for at least a third of patients we looked at, this was not the case at all -- their brains were almost completely normal," said Davatzikos in a press release.

In the reduced volume group, patients’ brains showed significantly less brain matter than seen in healthy controls across several brain regions including the thalamus and frontal cortex. In the second subtype, the only differences noted were an increased amount of gray matter – consisting mainly of neurons – in the basal ganglia, a brain area linked to motor control, and a higher white matter – consisting of axonal connections – volume in deeper brain areas.

The team assessed their subjects’ brains using a combination of MRI imaging and machine learning. Once the patients in the three different sites had been scanned, the team used a recently developed machine learning protocol called HYDRA (heterogeneity through discriminative analysis) to separate their brain data into distinct groups with similar features.

As opposed to previous grouping approaches, HYDRA cuts out confounding factors present in the patient group by directly comparing healthy controls to patients. "This method enabled us to sub-categorize patients and find how they differed from the controls, while allowing us, at the same time, to dissect this heterogeneity and tease out multiple pathologies, rather than trying to find a dominant pattern," said Davatzikos. 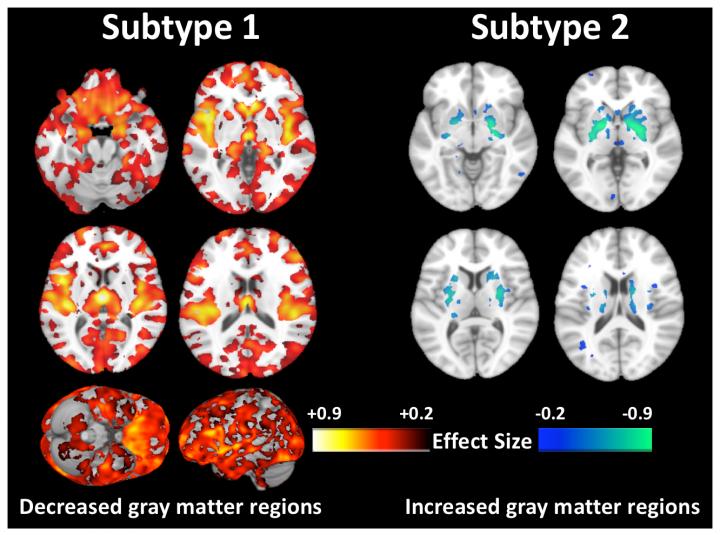 In a large clinical study, 60 percent of patients with schizophrenia (subtype 1) had decreased gray matter volumes throughout the brain compared to healthy people, which is the typical pattern seen in those with this disorder. However, researchers found that over a third of schizophrenia patients (subtype 2) did not present with this pattern. These brains had increased volumes of gray matter in the basal ganglia, but were otherwise similar to healthy controls. Credit: Penn Medicine

Their analysis showed that 115 patients in their samples, nearly 40% of the total, didn’t show the classical “reduced volume” brain appearance. This group, dubbed “SCZ2” did not differ from the other patient group (SCZ1) in terms of age, sex, duration or severity of illness, or medication used. The only different noted was that SCZ2 patients were more likely to have had fewer years of education.

Importantly, the team noted that SCZ1 patients’ gray matter volume correlated negatively with disease course – the longer they had had clinical schizophrenia for, the lower their gray matter volume. No such correlation was seen in SCZ2 patients.

Questions remain about the schizophrenia brain

When the symptoms of schizophrenia can be so debilitating, how can 40% of patients show no difference in brain anatomy? Davatzikos is clear that his team don’t have all the answers. “This is where we are puzzled right now. We don't know,” said Davatzikos. “What we do know is that studies that are putting all schizophrenia patients in one group, when seeking associations with response to treatment or clinical measures, might not be using the best approach."

Davatzikos’s co-author, University of Pennsylvania associate professor Daniel Wolf, also sees a clear benefit to identifying discrete subtypes of schizophrenia. “The treatments for schizophrenia work really well in a minority of people, pretty well in most people, and hardly at all in a minority of people. We mostly can't predict that outcome, so it becomes a matter of trial and error,” said Wolf in a press release. Understanding the biology behind a disorder like schizophrenia can hopefully lead to personalized treatments that work for more patients, explained Wolf.

In the same way that our improved understanding of cancer has seen the creation of many different subtypes of the disease, each treated slightly differently, Davatzikos thinks his team’s findings may herald a wholesale change in how schizophrenia diagnosis is conducted. “In the future, we're not going to be saying, 'This patient has schizophrenia,' We're going to be saying, 'This patient has this subtype' or 'this abnormal pattern,' rather than having a wide umbrella under which everyone is categorized,” said Davatzikos.