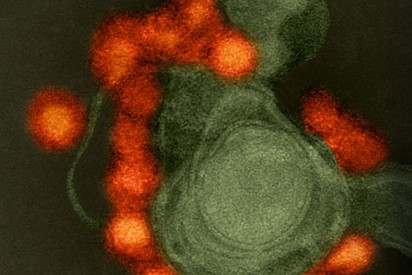 The Zika virus contains 10 proteins, but only NS4A and NS4B matter when it comes to microcephaly, according to a USC-led study published in the journal Cell Stem Cell on Aug. 11. These miscreant proteins, researchers discovered, have two shared life goals: to handicap fetal brain formation and to mobilize their malevolent forces.

The USC-led study, a collaborative effort between the virology and neurobiology disciplines, is also the first to examine Zika virus on the molecular level, said Jae Jung, senior corresponding author and distinguished professor and chair of the Department of Molecular Microbiology and Immunology at the Keck School of Medicine of USC.

“We now know the molecular pathway, so we made the first big step toward target therapy for Zika-induced microcephaly,” Jung said. “Years from now, one shot or a series of shots could target the proteins NS4A and NS4B or their collaborators.”

The Centers for Disease Control and Prevention in April confirmed that Zika virus causes microcephaly and other severe fetal brain defects, but it was unclear how. Jung and his colleagues explained the molecular mechanisms that lead to the devastating condition.

“This field moves so fast; however, no one has examined the viral proteins in Zika before,” said Jung, holder of the Fletcher Jones Foundation chair in molecular microbiology and immunology. “The scientific community knows what the Zika virus does but not who is responsible. It’s the difference between saying this nation’s Olympic team earned a gold medal or saying the swim team won the gold medal. My lab is scrutinizing the jobs Zika proteins have in the creation of disease.”

The miscreant Zika proteins smack a cellular signaling gatekeeper called “Akt-mTOR pathway” until it is disoriented and can no longer properly guard brain development and autophagy regulation, the cell’s recycling factories. Autophagy usually digests and kills pathogens; however, when a family of viruses called flaviviruses (dengue, hepatitis C and Zika) infects a cell, autophagy helps the virus proliferate.

“Zika loves and needs autophagy,” Jung said. “Zika raises the activity in this recycling factory so they can use the energy and nutrients there to replicate. It’s possible that since Zika is using most of the energy, the neuronal stem cells are left with metabolic deficits. Thus the chances for them to differentiate and mature into neurons and other brain cell types is much lower.”

In short, Zika NS4A and NS4B proteins stunt brain development and prod autophagy to mushroom so that the virus could spread. When these two key proteins hijacked fetal neural stem cells, the size of brain organoids were, on average, halved, according to the study.

Working collaboratively, the two proteins stunted the growth of fetal neural stem cells further by 65 percent. Moreover, differentiation of neural stem cells into mature brain cells, such as neurons and star-shaped supporting cells called astrocytes, was reduced by up to 51 percent.

Taking the next step

USC researchers are already working on experiments to better demonstrate the functions of NS4A and NS4B in brain organoids and in mouse models, said Zhen Zhao, corresponding co-author and an assistant professor of research physiology and biophysics. He worked with Berislav Zlokovic, director of the Zilkha Neurogenetic Institute at Keck Medicine of USC.

“It is important to remember that not every pregnant woman infected with Zika virus gives birth to a baby with microcephaly,” Zhao said. “Nevertheless, we are trying to develop a cure for that percentage that does get Zika-related microcephaly.”

Scientists are still looking for effective biomarkers to indicate when a pregnant woman who has been infected with Zika needs intervention. MRI is one possibility, but more work needs to be done, Zhao said.

A Bochum-based team intends to use organoids derived from stem cells to study the progression of SARS-CoV-2 infection and to identify antiviral substances.

END_OF_DOCUMENT_TOKEN_TO_BE_REPLACED

A simple blood test may be able to determine how physically fit you are, according to a new study conducted by scientists at the Stanford University School of Medicine.

END_OF_DOCUMENT_TOKEN_TO_BE_REPLACED

The Recipe for Efficient Protein Synthesis

Scientists have studied more than 30 thousand variants of genetic sequences encoding two fluorescent proteins in order to determine which characteristics of mRNA can increase the efficiency of translation.

END_OF_DOCUMENT_TOKEN_TO_BE_REPLACED

Structure of Unique Optogenetic Tool Obtained for the First Time