Complete the form below and we will email you a PDF version of "Unexpected link between choroid plexus, chronic pain"

An observation by Finnish researchers shows that the central nervous system plays an important role in complex regional pain syndrome. -

Aalto University neuroscientists, in collaboration with researchers at Helsinki University Hospital and Harvard Medical School, have found a novel connection between the size of the choroid plexus in the brain and complex regional pain syndrome (CRPS). The findings were recently published in Scientific Reports.

'When studying magnetic resonance images of the brains of patients suffering from CRPS, we noticed that the choroid plexus was nearly one-fifth larger in patients than in healthy control subjects,' says Postdoctoral Researcher Guangyu Zhou from Aalto University Department of Neuroscience and Biomedical Engineering, who analyzed the images. 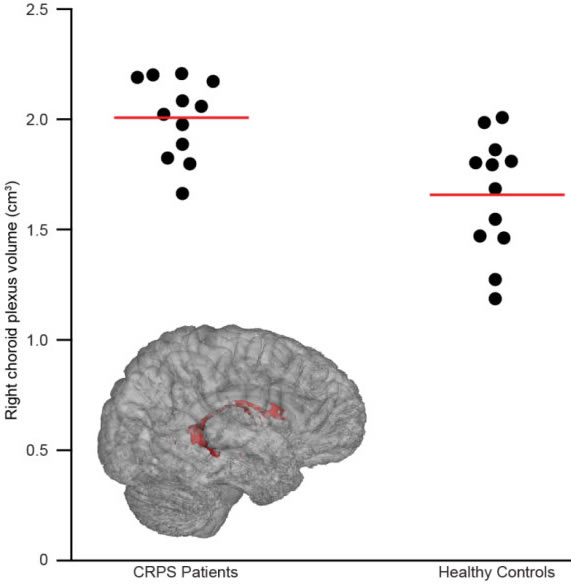 Located in the walls of the brain ventricles, the choroid plexus is best known for producing cerebrospinal fluid, which forms a protective mechanical cushion and immunological buffer for the brain. It also controls the passage of many substances from the blood into the cerebrospinal fluid, brain, and spinal cord.

'However, in clinical neuroscience, the functions of choroid plexus beyond cerebrospinal fluid generation have been largely neglected; for example, the size of the choroid plexus is not quantified in routine brain scans,' explains Professor Riitta Hari, who was in charge of the research.

'As the choroid plexus is known to mediate the interaction between inflammation in the periphery of the body and in the brain, it is an interesting and important target for future research of chronic pain and CRPS in particular,' continues Hari.

Regional pain syndrome is a chronic and highly debilitating condition that typically develops after a minor trauma, to the hand for example, and then spreads to other areas, such as the whole upper limb and sometimes even to the other side of the body. Thus, it has been suggested earlier that the central nervous system might play an important role in the disease.

The scientists measured the volume of the choroid plexus from 3-tesla structural magnetic resonance images. The study involved 32 subjects, half of whom suffered from the syndrome and half of whom were healthy.