Researchers with Oregon Health & Science University's Vollum Institute have given science a new and unprecedented 3-D view of one of the most important receptors in the brain -- a receptor that allows us to learn and remember, and whose dysfunction is involved in a wide range of neurological diseases and conditions, including Alzheimer's, Parkinson's, schizophrenia and depression.

The unprecedented view provided by the OHSU research, published online June 22 in the journal Nature, gives scientists new insight into how the receptor -- called the NMDA receptor -- is structured. And importantly, the new detailed view gives vital clues to developing drugs to combat the neurological diseases and conditions.

"This is the most exciting moment of my career," said Eric Gouaux, a senior scientist at the Vollum Institute and a Howard Hughes Medical Institute investigator. "The NMDA receptor is one of the most essential, and still sometimes mysterious, receptors in our brain. Now, with this work, we can see it in fascinating detail." 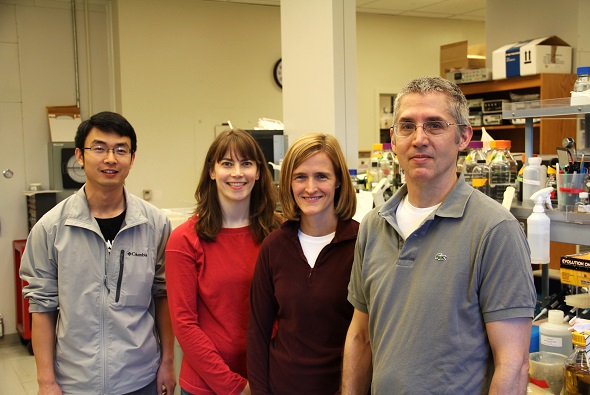 Receptors facilitate chemical and electrical signals between neurons in the brain, allowing those neurons to communicate with each other. The NMDA (N-methyl-D-aspartate) receptor is one of the most important brain receptors, as it facilitates neuron communication that is the foundation of memory, learning and thought. Malfunction of the NMDA receptor occurs when it is increasingly or decreasingly active and is associated with a wide range of neurological disorders and diseases. Alzheimer's disease, Parkinson's disease, depression, schizophrenia and epilepsy are, in many instances, linked to problems with NMDA activity.

Scientists across the world study the NMDA receptor; some of the most notable discoveries about the receptor during the past three decades have been made by OHSU Vollum scientists.

The NMDA receptor makeup includes receptor "subunits" -- all of which have distinct properties and act in distinct ways in the brain, sometimes causing neurological problems. Prior to Gouaux's study, scientists had only a limited view of how those subtypes were arranged in the NMDA receptor complex and how they interacted to carry out specific functions within the brain and central nervous system.

Gouaux's team of scientists -- Chia-Hsueh Lee, Wei Lu, Jennifer Michel, April Goehring, Juan Du and Xianqiang Song -- created a 3-D model of the NMDA receptor through a process called X-ray crystallography. This process throws x-ray beams at crystals of the receptor; a computer calibrates the makeup of the structure based on how those x-ray beams bounce off the crystals. The resulting 3-D model of the receptor, which looks something like a bouquet of flowers, shows where the receptor subunits are located, and gives unprecedented insight into their actions.

"This new detailed view will be invaluable as we try to develop drugs that might work on specific subunits and therefore help fight or cure some of these neurological diseases and conditions," Gouaux said. "Seeing the structure in more detail can unlock some of its secrets -- and may help a lot of people."