Complete the form below and we will email you a PDF version of "Why Does a Disease of the Cerebellum Cause Mental Health Disorders? An Explanation May Lie in the Hippocampus"

Complete the form below to unlock access to this Audio Article: "Why Does a Disease of the Cerebellum Cause Mental Health Disorders? An Explanation May Lie in the Hippocampus"

A recent study suggests that spinocerebellar ataxia 1 (SCA1), a neurodegenerative disorder of the cerebellum, could affect the functioning of the hippocampus, possibly explaining the mysteriously high occurrence of mental health issues in this devastating disease.

SCA1 is an inherited condition leading to a degeneration of the cerebellum and brainstem. The cerebellum, located in the hindbrain, is responsible for controlling gait, posture, coordination and balance. As such, SCA1 tends to cause movement problems. Similarly to other types of spinocerebellar ataxias, SCA1 also causes mental health issues, including depression and memory deficits, which tend to aggravate core symptoms and accelerate the disease´s progression. However, how these symptoms causally relate to cerebellar damage or other SCA1 neuropathology has remained unclear.

A new study led by Czech researchers from Charles University employed a mouse model carrying a mutation in the ATXN1 gene similar to the disease-causing change seen in human SCA1 patients. At first, the team compared the SCA1 mice with their healthy siblings in a variety of behavioral and cognitive tests across different disease stages. 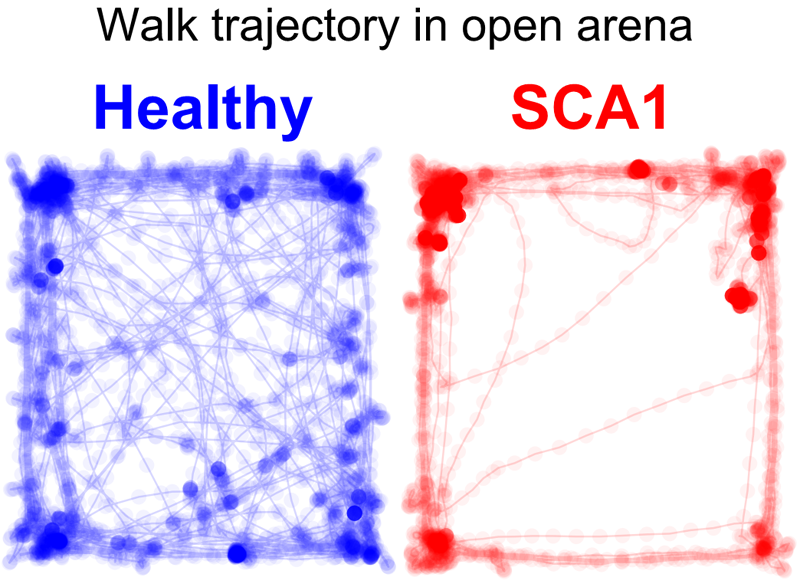 Figure 1: Open bright arena induces two opposite tendencies in mice: curiosity, leading to thorough arena exploration, and fear, forcing the animal to hide. In this test, mice with spinocerebellar ataxia 1 tended to hide in the corners, and their walks are more limited to the space along the walls, suggesting higher anxiety level.

“We found that the SCA1 mice exhibit distinctly abnormal behaviour resembling the mental issues in human patients. We were also extremely surprised to find that this pathological behaviour occurs even in very young mice with yet undisturbed motor functions”, says Martina Salomova, a PhD student and co-author of the study.

For example, SCA1 mice behaved anxiously, lacked the motivation to escape from an unpleasant situation and were less interested in a sweet reward, resembling depressive and anhedonic emotions in humans. Moreover, although they were able to learn a simple spatial task, they failed to flexibly re-learn when the setting of the task was changed.

Although the cerebellum was surprisingly intact in very young SCA1 mice, their hippocampus was smaller than that of normal mice from the age of 10 weeks and they exhibited dramatic impairments in the production of new neuronal cells. Interestingly hippocampal size was associated with more severe behavioural impairments, with the most severe problems seen in mice with smaller hippocampi. Moreover, the hippocampus in the SCA1 mice showed dampened neuroplasticity and decreased levels of BDNF, the neuroprotective protein necessary for the growth of neuronal projections.

Figure 2: The hippocampi of mice with spinocerebellar ataxia 1 showed dramatically impaired production of new neurons. DCX and PSA-NCAM are markers of the young neurons.

Further experiments revealed that above-mentioned hippocampal impairments were accompanied by dysfunction in mitochondria, the organelle supplying these brain cells with chemical energy. “The proper mitochondrial functions, as well as a sufficient level of plasticity-promoting proteins, are essential for the neuroplasticity and neurogenesis. We, therefore, believe that stimulating the production of these proteins and stimulation of mitochondria functions may be a hopeful target for future therapeutically-focused research in spinocerebellar ataxias” says Jan Jedlicka, another PhD student and coauthor of the paper.

Although the validation of these results in humans is necessary, the study suggests that hippocampal dysfunctions may constitute an important factor in the mental aspects of spinocerebellar ataxias. The findings suggest that SCA1 is a complex disease, causing not only selective death of some neuronal populations in the cerebellum and brainstem but also substantial functional impairments outside of these regions.