Complete the form below and we will email you a PDF version of "An Introduction to Five Psychedelics: Psilocybin, DMT, LSD, MDMA and Ketamine"

Interest in the therapeutic potential of psychedelics, having lain relatively dormant in the face of stigma and heavy regulations for decades, has reignited in the last ten years. Landmark studies showing these compounds’ effectiveness in treating some mood disorders have kickstarted a wave of clinical research, with well over 100 separate trials now investigating psychedelics’ health applications. Let's take a closer look at five important psychedelic compounds. 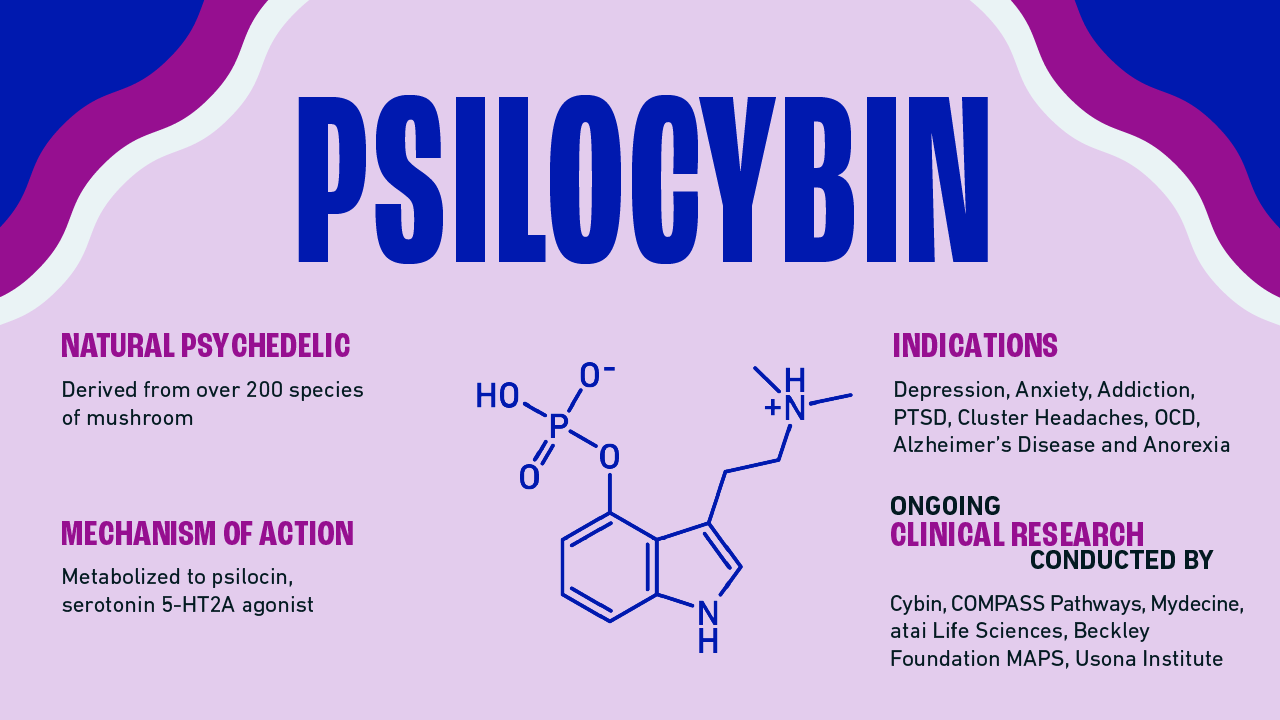 Psilocybin is a naturally occurring psychedelic produced by over 200 species of mushroom, including Psilocybe cubensis, Psilocybe cyanescens and Psilocybe mexicana. Illegal in most industrialized countries for nearly half a century, it has been decriminalized in several US cities, including Denver, CO over the last few years.

Psilocybin is part of a family of molecules called the indolamines, which includes DMT and LSD (see below) and also more common endogenous neurotransmitters, such as serotonin. It is dephosphorylated to form its metabolite, psilocin, which can cross the blood-brain barrier and, given its structural similarity to serotonin, can easily activate the serotonin 5-HT2A receptor. It is this receptor activation that is thought to produce psilocybin’s psychedelic effects. These effects, which are dose-dependent, can include heightened perception, imagery, complex hallucinations and distortions of time.

There are a number of theories on how psilocybin produces psychedelic effects in the brain, including alterations to thalamic gating and increases to activity in the prefrontal cortex.

Psilocybin hasn’t been approved for the treatment of any conditions. However, it is in trials for a wide range of indications, including:

In May 2021, psilocybin was used in one of the first trials to directly compare the antidepressant effects of a psychedelic and an antidepressant, in this case the selective serotonin reuptake inhibitor (SSRI) escitalopram. This landmark study was organized by researchers at Imperial College London’s Centre for Psychedelic Research.

This showed that psilocybin could match the antidepressant effects of the SSRI. The data suggested that psilocybin may produce a deeper and faster effect, but the trial only involved 59 people, so wasn’t adequately powered to detect a significant difference.

The trials and pre-clinical research into psilocybin’s therapeutic potential are being conducted by a host of private companies and research institutes. Some of the companies involved include: 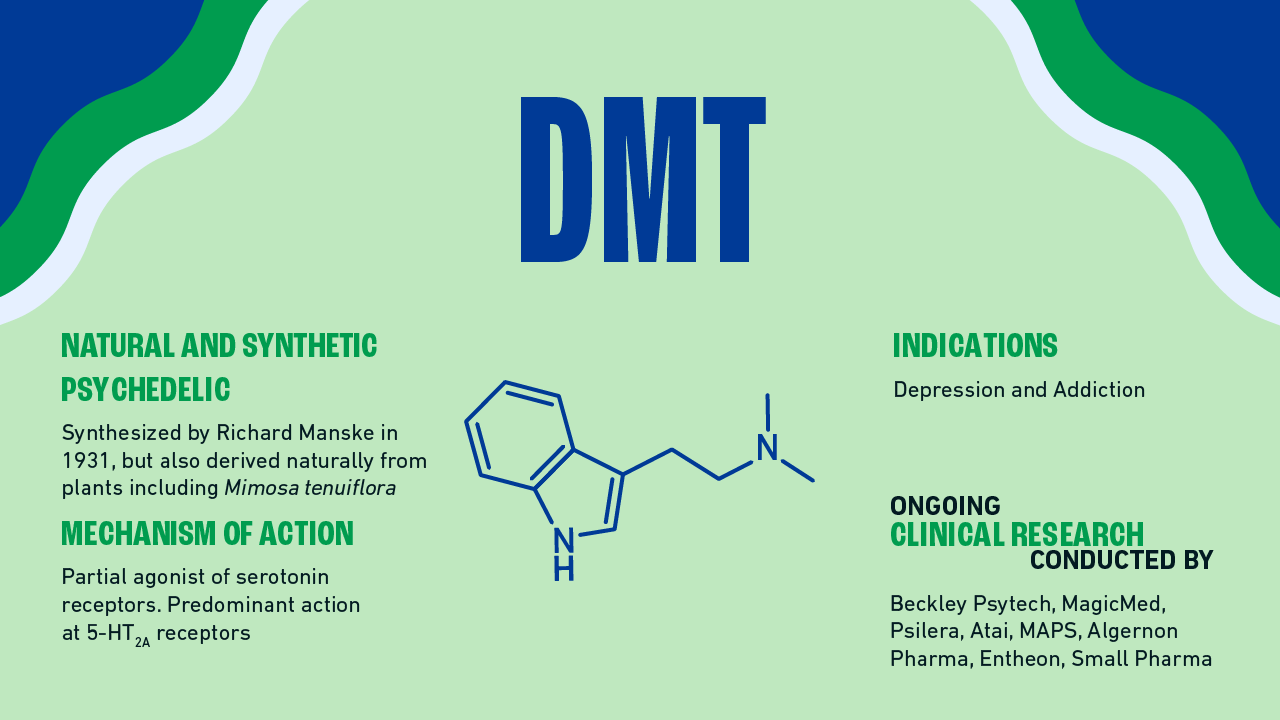 DMT has been used for thousands of years in psychedelic rituals and practices across South and Central America. It is one of the key active ingredients in the psychedelic brew ayahuasca. In these traditional uses, DMT has been isolated from plants, such as Psychotria viridis, known in Mexico as chacruna. Ayahuasca is prepared by boiling plants rich in DMT, such as P. viridis, alongside β-carboline-type alkaloid-containing plants, such as Banisteriopsis caapi.

German-Canadian chemist Richard Manske was the first to synthesize DMT in 1931. An indolamine, like psilocybin, DMT is actually present in minuscule quantities in the brain, where it is synthesized from the amino acid tryptophan by the catchily named enzyme, indolethylamine-N-methyltransferase. Why this occurs remains a mystery.

The drug was dubbed the “spirit molecule” by Rick Strassman, associate professor of psychiatry at the University of New Mexico School of Medicine, due to the similarities between the drug’s effects and intense religious or spiritual experiences. These similarities, Strassman said, included “visions, voices, a seeming separation of consciousness from the body, extreme emotional states and contact with seemingly discarnate intelligences.”

Like psilocybin, DMT is thought to exert its psychedelic effects via activation of the 5-HT2A receptor. It is very rapidly metabolized in the body. In one study, just 0.16% of an intramuscular dose of DMT was detected after a 24-hour period.

Compared to psilocybin, DMT research is less advanced. It is in early stage pre-clinical and clinical trials for:

Ongoing research into DMT is conducted by the following companies: 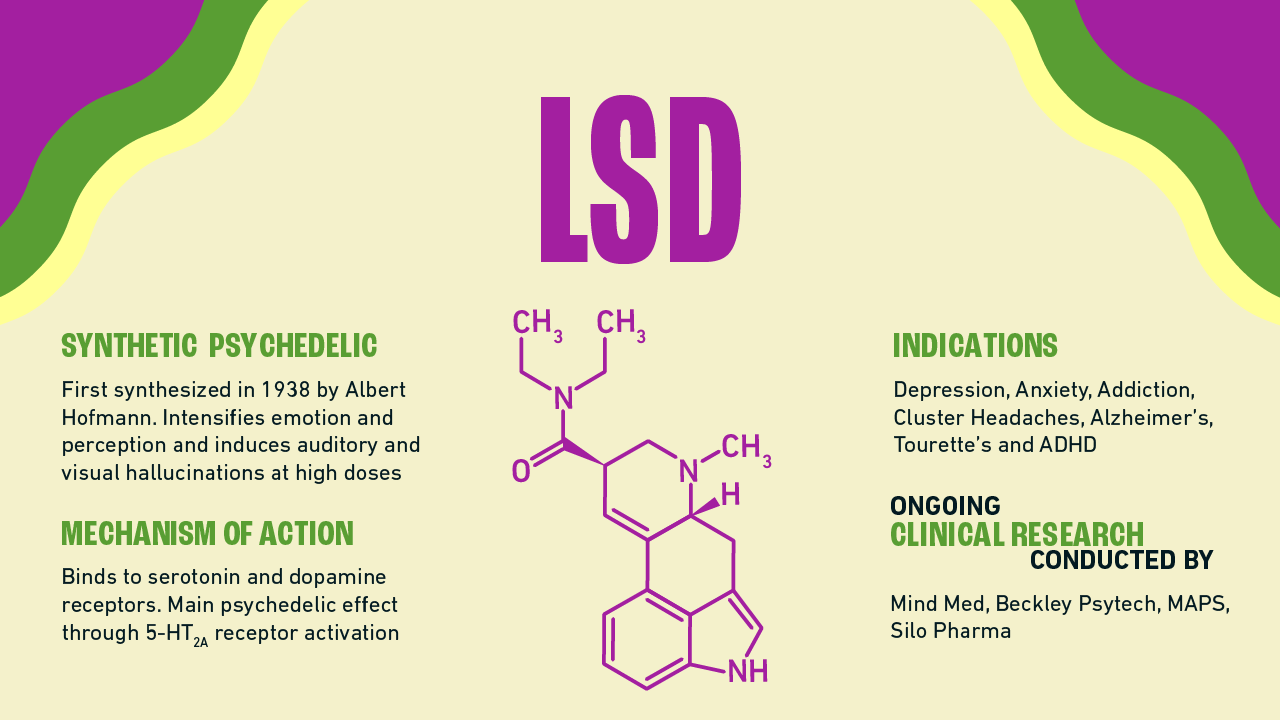 An entirely synthetic psychedelic, LSD was first produced in 1938 by Swiss chemist Albert Hofmann. The compound enhances emotion and perception and, at higher doses, induces auditory and visual hallucinations. It was heavily studied in the 1950s and 1960s, but was, like other psychedelics, banned in the late 1960s in the US, greatly compromising research efforts into the compounds.

Like other classical psychedelics, LSD is thought to exert its mechanism of action through stimulation of the 5-HT2A serotonin receptor. It is an extremely potent hallucinogen and has a long half-life – effects can potentially last up to 12 hours. Like the other classical hallucinogens, LSD has a very low toxicity and does not provoke addiction or withdrawal symptoms. Also like DMT and psilocybin, LSD is very heavily regulated, and is still classed as a Schedule I drug by the US Food and Drug Administration (FDA).

It is in early-stage pre-clinical and clinical trials for:

Ongoing research is conducted by the following companies: 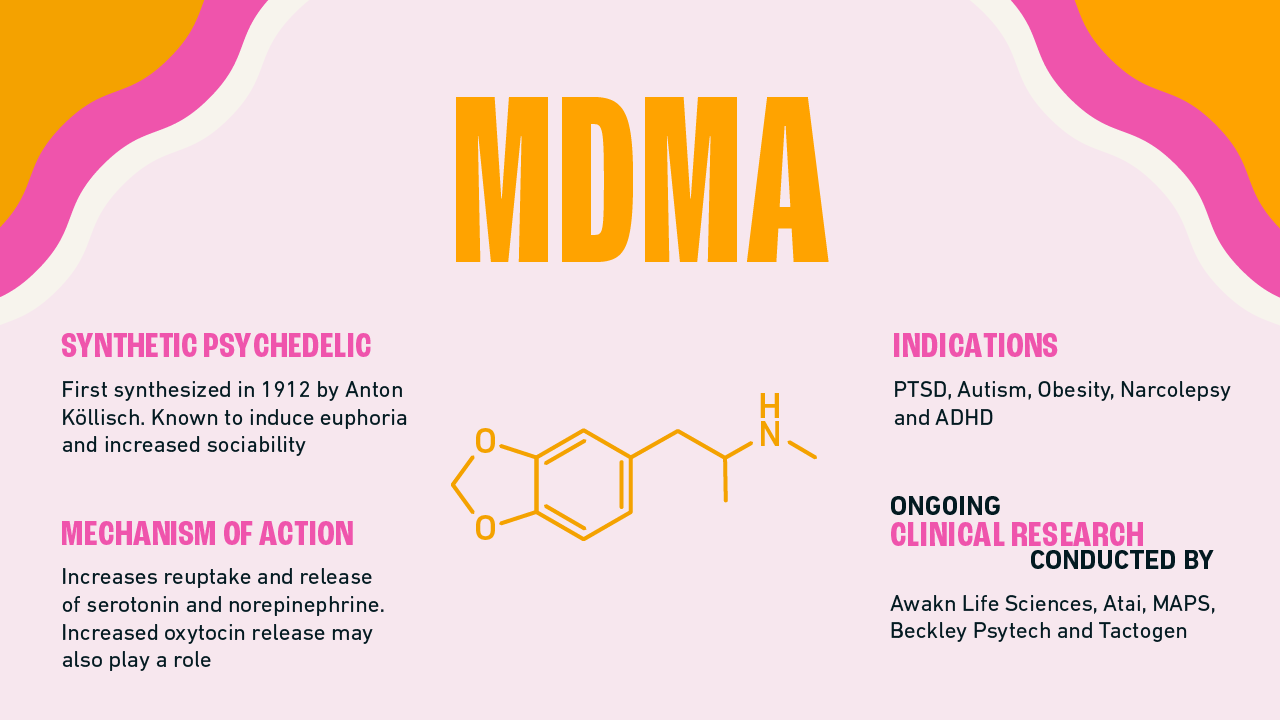 MDMA was first synthesized by Anton Köllisch in 1912. It is known to induce euphoria and increased sociability. The drug’s pro-social effects led it to be dubbed an “entactogen” (meaning “producing a touching within”) compound by pharmacologist David Nichols. Recreationally, decades of clubbers and ravers have used ecstasy, which is MDMA that is often cut with other compounds.

MDMA isn’t a classical psychedelic, and has no overt hallucinatory effects, but can mimic LSD and psilocybin in producing feelings of depersonalization and altered perception and thought. It has a methamphetamine-like chemical structure. It is thought to act by increasing the reuptake and release of serotonin, dopamine and norepinephrine, although enhanced release of oxytocin may also be a factor.

Despite its reputation as a party drug, the FDA awarded MDMA Breakthrough Therapy Designation in 2017. This designation, which allows for the FDA to fast-track certain elements of the clinical trials procedure, was given to the Multidisciplinary Association for Psychedelic Studies (MAPS) to investigate the use of MDMA in treating post-traumatic stress disorder (PTSD).

MDMA has been investigated in pre-clinical and clinical research for:

Ongoing research is being conducted by:

Earlier this year, MAPS released the results of its MDMA clinical trial for PTSD. In this trial, MDMA was paired with rounds of psychotherapy. After three sessions of this therapy, 32% of users given a placebo no longer qualified for a PTSD diagnosis. But for those given MDMA as well, this percentage rocketed to 67%. Lead author on the paper that documented MAPS’s success, the University of California San Francisco’s Jennifer Mitchell, said that the “unique ability of MDMA to raise compassion and understanding while tamping down fear is likely what enables it to be so effective.” It appears to be most effective at helping patients with the dissociative subtype of PTSD. This group tend to exhibit depersonalization from the trauma that caused their PTSD. Mitchell suggests that with the right mindset and appropriately supportive environmental setting, MDMA can help those that have mentally distanced themselves from a trauma confront and overcome it. 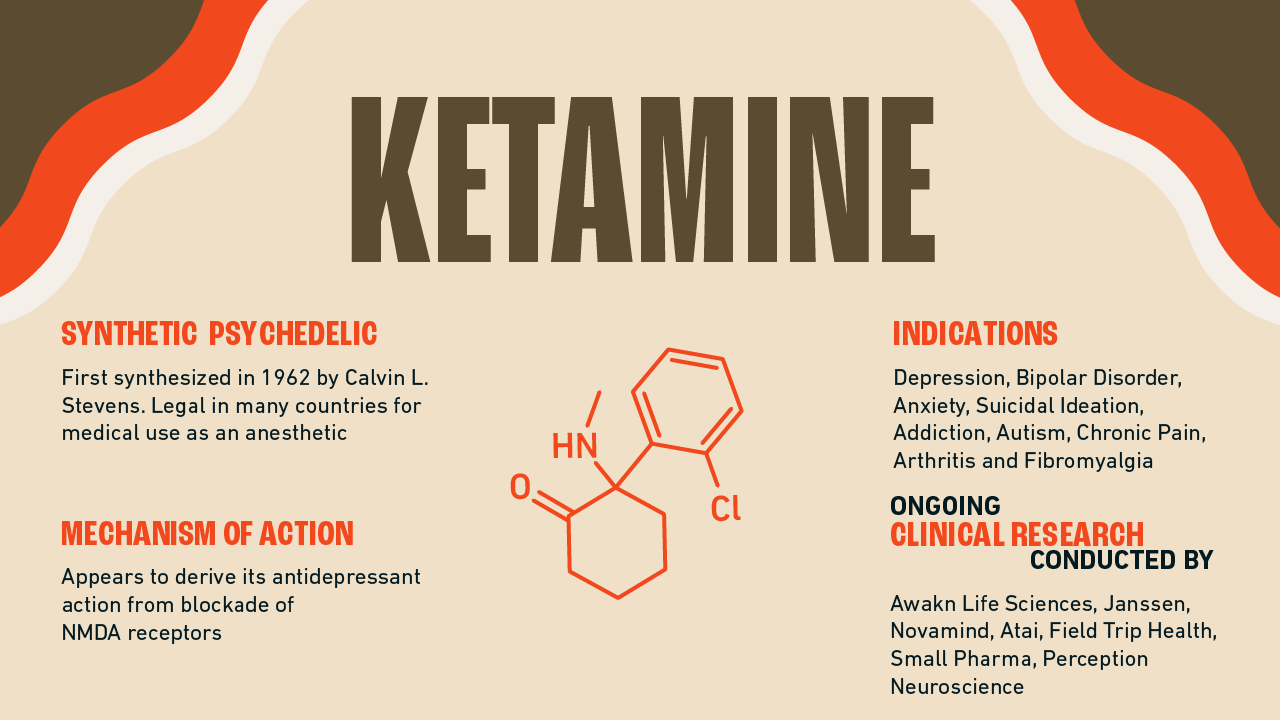 Ketamine was first synthesized in 1962 by Calvin L. Stevens. Ketamine is a little different from the other compounds on this list for several reasons:

Ketamine’s exact mechanism of action is unclear. It appears to derive its antidepressant action from blockade of neuronal receptors called NMDA receptors but selective block of NMDA receptors on GABAergic interneurons and inhibition of AMPA receptors may also play a role.

As the only licensed psychedelic, ketamine is being studied for a wide range of indications, including:

This research is being conducted by:

While studies into all the above compounds look promising, the great majority of the research is at an early stage. Each psychedelic functions differently, with significant mechanistic gaps between classical and non-classical psychedelics. Keep checking in at Technology Networks for more psychedelics news and to follow the progress of this exciting class of compounds through preclinical and clinical studies.