Cutting Through the Headlines: Are Scientists Really Growing Sentient "Mini-brains"?

Cutting Through the Headlines: Are Scientists Really Growing Sentient "Mini-brains"?

Neuroscience 2019, the world’s biggest conference of brain science, finished just over a month ago. In the wake of some particularly inflammatory headlines, we take a closer look at whether claims that new model systems for studying the brain could produce sentience in a jar have any truth to them.

It must be a matter of some regret to researchers that, when they were first created a few years ago, the temptation to call the three-dimensional balls of neural tissue “mini-brains” proved too strong to resist.

At the Society for Neuroscience’s 2019 conference, the catchy, headline magnet term “mini-brain” had very much been taken out of the lexicon. In a press conference that we attended, the gathered scientific panel had obviously been encouraged to stick to a new term: “brain organoid”. More abstract than “mini-brain”, and certainly less likely to feature on a tabloid front cover.

As a session introducing the latest advances in organoid research drew to a close, the rebrand appeared to have worked. There had been no questions about Futurama-style talking heads in jars, or questions of existential cellular dread. So far. But by the end of the session, a dispute rose which highlighted some real doubts among researchers in the field, indicating that the topic of consciousness, let alone consciousness in a jar, was far from settled. But before we get to that, let’s take a look at the science behind brain organoids.

The previous day’s plenary had gone very smoothly. A truly excellent talk by Harvard Stem Cell Institute (HSCI)’s Paola Arlotta had shown the care and detail that had gone into organoid science.

Arlotta began her talk by outlining why researchers might consider making three-dimensional neuro-balls (my submission for what brain organoids should really be called) in the first place. Studying the brain is really hard. Its complexity is unrivaled by any other organ in the body and humans tend to object if you try and remove their brain to get a closer look.

As such, biomedical researchers have mainly focused on one of two approaches when attempting to model the incredible intricacy of the brain:

Clearly, neither route is perfect, and teams like Arlotta’s have been seeking a new model that could potentially take the best of both worlds and put them in one system. Brain organoids were meant to be that model. A lot of work has gone into enabling the creation of such a system, including huge steps in our tools for studying brain development. This requires handling data from more than just one cell type, as Arlotta explained in her lecture:

“There are no individual subtypes that develop in isolation. They all develop together and it's really an orchestrated dance of many different cell types being generated. This is the complexity that we have always wanted to provide – all at once. All cells, all genes, all stages, except we have never had the technology and methodology that would allow us to do that.” 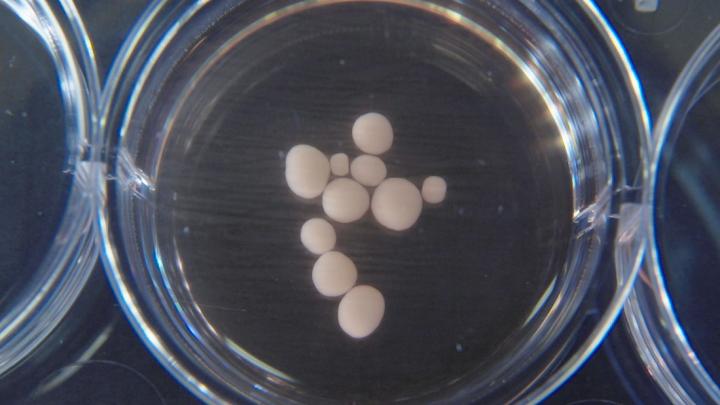 Forget a "brain in a jar". This image shows what pea-size brain organoids at 10 months old actually look like, grown in the Muotri lab at UCSD. Credit: Muotri Lab/UCTV

“This changed a few years ago, when we invented amazing single-cell level genomics approaches that now allow us to sequence thousands, to hundreds of thousands, to millions of cells from any tissue any stage of any organism.” Arlotta continues. This innovation, alongside computational methods, has permitted researchers to take a widescreen view of brain development.

For Arlotta’s team, capturing this global picture meant a lot of meticulous work: “Basically, we set off to purify and refine, at a single cell level, every single cell of the developing somatosensory cortex, which we sampled every day in the mouse until about P1 [postnatal day 1] when the majority of the cells had been generated.” The result: beautiful, detailed plots of the gene expression underlining the development of this region of the mouse brain.

With this information, a blueprint for how a brain organoid should develop, Arlotta’s team could then go on to create organoids.

The simplicity of this process is something that made even Arlotta do a double take at first. “I was skeptical for many years, but then Yoshiki Sasai published what I think is a seminal experiment. Basically, what was shown is that if you take a 3D cluster of embryonic stem cells and you culture them in a dish, without adding much from the outside, these cells have the ability to self-organize… and undergo self-morphogenesis to give rise to an optic-cup like structure.” This cup has retinal and other cells of the mature eye, responds to light, and even forms morphological layers like an eye does. Sasai’s work, alongside that of Madeline Lancaster, formed the blueprint for future organoid work. It was published just seven years ago. This is a field advancing at a breakneck speed.

As such, it’s a field of great interest to the press and general public. To answer questions on her research, Arlotta joined UCSF’s Arnold Kriegstein and Michael Nestor from the Hussman Institute for Autism for the next day’s panel discussion.

The main points from the panel were as follows:

The latter point, addressed by Kriegstein, seems pivotal to the future of this field. He presented results from single-cell RNA-seq (a technique that analyzes genetic material in base-by-base detail) scans of organoids and human brain tissue. “The cell types are broadly similar to the ones you find in normally developing tissue, but the problem is that our genetic analysis is showing that they lack specificity, as though their identify is a bit confused,” explained Kriegstein.

Images of brain tissue contrasted with organoids clearly show the reduced complexity of the model brains, with fewer cell types and a different developmental timeline. Kriegstein showed that the organoid cells are under a type of cellular stress that seems to limit their ability to mimic normal cells (although when the cells were transplanted into a mouse brain, creating a human-mouse chimera, the stress seemed to reduce). This is both an issue for the organoids’ potential as a model for brain disease, and for any claims that they might in any way become sentient in any human way.

Arlotta’s data had suggested that organoids were able to be kept in bioreactors, alive for up to four years. Could the simplified organoids simply not be old enough yet? “This is not an adult brain that you make. It’s not even a complete younger brain, it’s very primitive and reductive. There is a limit to what you can do in culture; they only grow to a certain size and they only make certain cells,” said Arlotta. 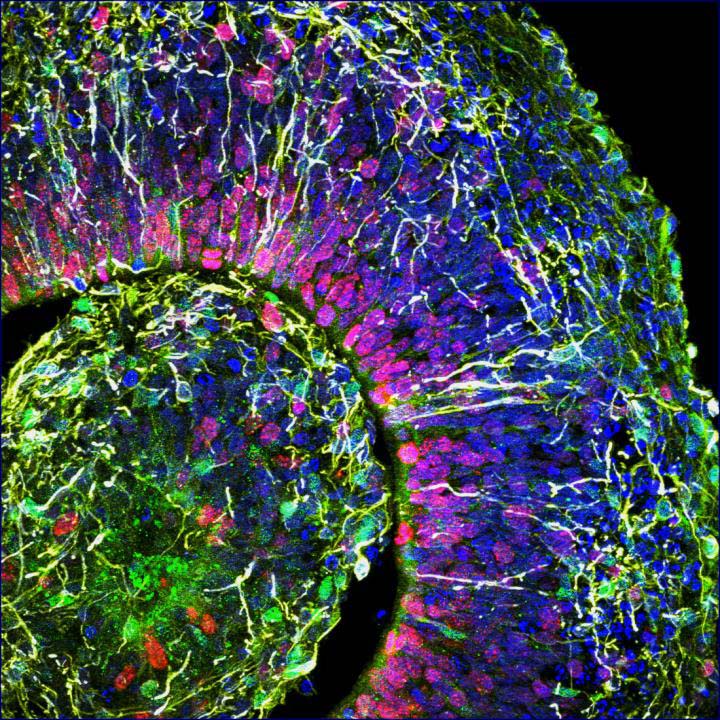 This is a cross-section of a brain organoid, showing the initial formation of a cortical plate. Each color marks a different type of brain cell. Credit: Muotri Lab/UCTV

The panel seemed in agreement, then, that their organoids would, given even years of development time, not ever be able to achieve the kind of complexity that might spark fears of sentience. But a surprising intervention towards the end of the conference highlighted a clear divide within the wider field on this point.

This point didn’t come from a member of the press, but from another researcher. This was Elan Ohayon, co-founder of the San Diego-based Green Neuroscience Laboratory (GNL), who had been quoted in The Guardian in the days before SfN, singing from a very different hymnsheet from the panel. In that article, Ohayon had said, "If there's even a possibility of the organoid being sentient, we could be crossing that line. We don't want people doing research where there is potential for something to suffer." The GNL is also opposed to any captive animal experimentation. In the press event Ohayon professed at length, to a stony-faced response from the panel, why he believed they were underestimating the risk of an ethically dubious outcome from their research.

Ohayon finished by asking whether the researchers felt that the field should be put on hold until more was known about consciousness in the organoids. Nestor, in response, highlighted the lack of cytoarchitecture present to support the conditions needed for sentience, but he was cut off by a sharp retort from Ohayon. “That’s incorrect. Actually that’s my specialty,” he began, before a stressed SfN staffer attempted to get him to sit down. Moving away from the microphone, Ohayon concluded, “It’s great that you are moving towards human-based research, the real concern is also this move towards chimera without thinking about sentience. You are underestimating where you are going, and it’s going to get there fast.”

To say the least, Ohayon’s views seem quite at odds with that of the panel (the Green Neuroscience Laboratory did not immediately respond to request for comment for this interview). But, as with much in science, there is perhaps a truth to be found in between these two divergent positions.

Talking later to UC San Diego Professor Alysson Muotri, who has used brain organoids in his lab for years, we began to find evidence of where that midpoint might stand. He explains that he led a panel discussion on ethics in brain organoids, which you can watch below. The panel consisted of experts in both neuroscience and philosophy. Disagreements began with the basic definition of what consciousness is. Christof Koch, Chief Scientist and President of the Allen Brain Institute suggests that the cortex alone could be sufficient for consciousness, whilst Patricia Churchland, and Emerita Professor at UC San Diego suggested that other regions, like a brain stem or thalamus would be required. Other panel members, Muotri told me, argued that: “You need a body, a brain connected to a body, otherwise there will be no consciousness coming from the tissue.” How can we have a debate about creating a conscious being in a jar, if we don’t really know what consciousness is in the first place?

So where does research go from here? One thing Muotri is clear on is that he doesn’t think science should halt due to a moral panic around organoids. “I don't think we need to slow down the research,” he says. “I think we just need to keep an eye on it, and having these open discussions, I think is helpful.” Putting restrictions on the science at this point, he says, “Would be a mistake. My take on that is that we should try to model the tissue as much as possible. So if we have the opportunity to recreate the human brain in a dish, I think we should do it, science should do it, because we have the potential to help so many people.”

What Muotri does suggest, in place of a halt to research, is a better effort to conduct studies in a more ethical way, similar to how scientists aim to conduct animal research. “We don't treat animals badly just because they're for research. We try to give them a good lifestyle. So for the organoids it might be exactly the same thing. We just have to agree on how we should do it. I mean, what are the conditions that we need to keep them alive? How do we discard them? How many of them we should use to answer specific scientific questions? So these are the kinds of debate that we can start right now. But I just think it would be unfair to stop science.”

So the potential of organoids, or brains-in-a-dish, or mini-brains, or whatever you want to call them, may be undeniable, but so is the potential of science to go faster than it intends. What scary headlines don’t reflect is that scientists are well aware of both these things.
Meet The Author