Imagine in the future, sending off a urine sample to get back an accurate prediction of whether you will develop diabetes in ten year’s time. Or your cancer surgeon has a high-tech knife that tells them exactly where to cut in real-time. These are just some of the potential clinical applications promised by the rapidly developing field of metabolomics. Here, we ask leading experts about its potential to transform the future of healthcare.

“Metabolomics is the attempt to measure all of the metabolites in a cell or biosystem,” says Dr James MacRae, Head of Metabolomics at the Francis Crick Institute in London.

He explains why he feels it is such a powerful approach: “You have tens of thousands of genes, of which tens of thousands will be expressed - and you also have the proteins expressed from them, which will then also be modified in different ways. And all of these things impact on a relatively small number of metabolites – in the thousands rather than the tens of thousands. Because of that, it’s a very sensitive output for the health or physiology of your sample.”

“With that in mind, metabolomics has great potential for application in most, if not all, diseases – from diabetes, heart disease, cancer, HIV, autoimmune disease, parasitology and host-pathogen interactions,” he adds.

Encapsulating the power and challenges of metabolomics

But the primary challenge for researchers is getting the coverage for as wide a range of metabolites as possible in any one experiment or project.

“The metabolites we’re dealing with have vast differences in chemical properties, which means you need multi-platform approaches and various types of instrumentation”, says MacRae. “We can either use an untargeted approach – trying to measure as much as possible, generating a metabolic profile. Or else a more targeted approach where we are focussing on specific metabolites or pathways,” he adds.

Researchers emphasise that metabolomics should not be viewed as a separate entity, but as complementary to other approaches. “Taking everything together – metabolic profiling, targeted assays, label incorporation and computational models – and also trying to associate all of this with proteomics and genomics and transcriptomic data – that’s really what encapsulates both the power and also the challenges of metabolomics,” says MacRae.

Bringing the Genome to Life with Metabolomics 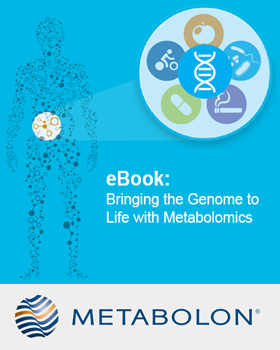 Download this eBook to learn about the latest advances in metabolomics and how this field is contributing to human genetics, transcriptional profiling, and microbiome research.

Because it can provide a dynamic phenotype of the human body, there are many potential clinical applications that could come from metabolomics.

Dr Warwick Dunn, Senior Lecturer in Metabolomics at the University of Birmingham explains: “Our genome is generally static and says what might happen in the future. And the metabolome at the other end is the opposite – very dynamic, saying what just happened or could be about the happen.”

“So we could apply it to identify prognostic biomarkers – for example, to predict if someone is at greater risk of developing diabetes five to ten years from now. And if you know that, you can change their lifestyle or environment to try and prevent it,” he adds.

It also has the potential to help unlock the power of personalised medicine. Dunn explains: “We know we’re all very different and we don’t respond to drugs in the same way – so we could potentially use metabolomics to help select the best treatment for each individual.” And studies are also identifying new metabolic pathways involved in disease, unlocking potential new drug targets.

There is also a great deal of excitement about potential new applications based on miniaturised technologies. For example, a team at Imperial College London are developing a new surgical knife for cancer treatment. MacRae explains: “As it cuts, it scalds the tissue and this releases a smoke that goes up a tiny tube that is detected by a mass spectrometer - and so the surgeon can identify biomarkers indicating whether it is tumour or healthy tissue. That could be such a powerful tool.”

But there are a number of key challenges that will need to be overcome before the full potential of metabolomics can be translated into clinical benefits.

Not least are the differences in the reality of how samples can be collected in the clinic compared to that of a controlled laboratory environment. MacRae explains: “Metabolism turns over so rapidly – I’m talking seconds and minutes – and so you have to be so careful with how they’re obtained and how they’re treated afterwards.”

To counteract this, researchers are putting huge thought into their power calculations to ensure they collect enough samples for statistically robust results. But this can then mean analysing thousands of samples, which is often beyond the capacity of a single lab. Dunn explains: “We need to be able to take data from different labs and be able to integrate these together, which we can’t do at the moment. The good news is that work is already underway to solve this – it’s a key goal of the International Phenome Centre Network.”

Another issue is that a lot of metabolites are still unknown. Dunn says: “In urine, there can be 10,000 metabolites and on a typical run we might only be identifying two or three thousand.”

But technologies and databases are rapidly advancing with ever-improving sensitivity and greater resolution. But this in itself brings new challenges with how to interpret the incredibly large, complex datasets. Dr Caroline Johnson, Assistant Professor at the Yale School of Public Health explains how new tools based on systems biology can help: “You can upload your untargeted metabolomic, transcriptomic and proteomic data and it will help you identify metabolic pathways that will give you some clues as to what could be happening biologically.”

There is also huge excitement about the development of new mass spectrometry imaging technologies – which are potentially game-changing, eliminating the need to grind up samples before analysis. MacRae enthuses: “You can take a slice of tissue and essentially do metabolomics on it so that you can look at the intricate nature of what metabolism is happening within a tissue.”

“It’s brand new technology and there’s a lot of work needed to be done. But in the next ten years, it’s going to become more important with more and more applications,” he adds.

A coming of age

There’s a huge sense of excitement that metabolomics is coming of age, with more and more researchers from different areas bringing it into their work. And at the same time, there’s a great desire within the field to see discoveries pushed forward into clinical practice.

As Johnson sums up: “I think it’s really about applications to human health and the steps to get there that are most exciting - and I think it’s going to happen in the next decade.”

Complete the form below to unlock access to this Audio Article: "Metabolomics and Health – On the Cusp of a Revolution"