Ribonucleic Acid (RNA) polymerase is an intermediary enzyme responsible for processing gene sequences into RNA-based genetic material that can be utilized in protein synthesis. In this article, we define RNA polymerase and further explore its various functions throughout cell biology.

What is RNA polymerase?

RNA polymerase is a multi-unit enzyme that synthesizes RNA molecules from a template of DNA through a process called transcription. The transcription of genetic information into RNA is the first step in gene expression that precedes translation, the process of decoding RNA into proteins.

The RNA polymerase enzyme is a large complex made up of multiple subunits1. The prokaryotic form of RNA polymerase has four subunits capable of transcribing all types of RNA. In eukaryotes, these enzymes have eight or more subunits that facilitate the attachment and processing of DNA throughout transcription. 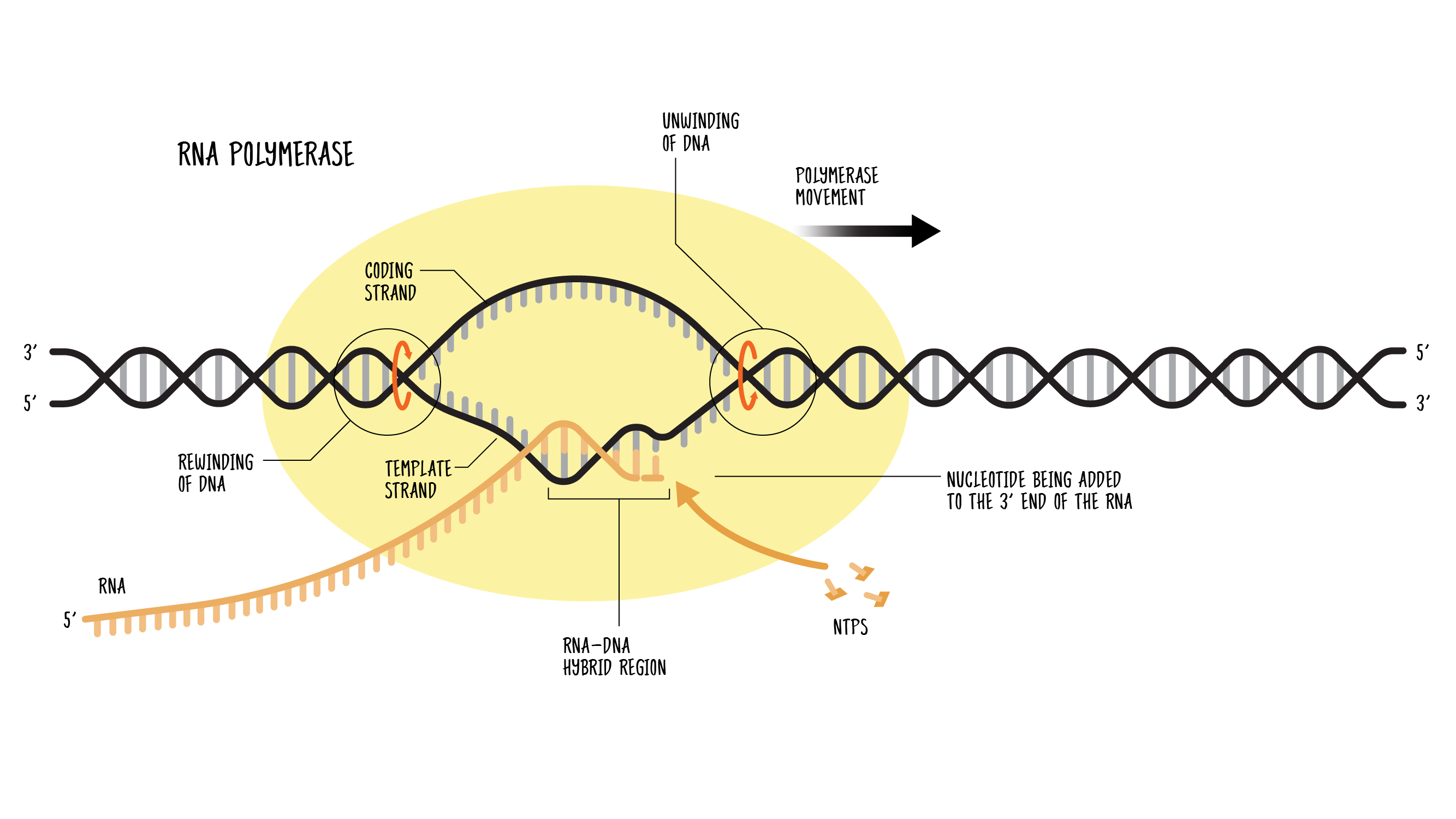 The three stages of transcription involve various functions of RNA polymerase that result in the synthesis of RNA:

2. Elongation commences when RNA polymerase unwinds double-stranded DNA into two single strands. These DNA strands are used as genetic templates for RNA synthesis. As the DNA template strand moves through the RNA polymerase it builds an RNA strand that is complimentary to the transcribed DNA strand.

3. Termination is the final step of transcription. Once RNA polymerase encounters a terminator sequence or signal, it stops adding complementary nucleotides to the RNA strand. This is followed by the release of the RNA transcript, which marks the end of transcription for that template of DNA.

What are the different types of RNA polymerase?

Exclusively found in plants, RNA polymerase IV and V are transcription enzymes that evolved as specialized forms of RNA polymerase II4. Both enzymes produce small interfering RNA (siRNA) transcripts, which play a role in the silencing of plant genes.

DNA polymerase synthesizes double-stranded DNA molecules from unwound DNA strands during replication. Even though the end products of replication and transcription are different, they both work upon DNA by adding nucleotides in the same 5’ to 3’ direction. In contrast with RNA polymerase, DNA Polymerase is semi-conserved process that utilizes both strands of a double-stranded DNA molecule as a template for replication.

RNA polymerase is an attractive target for drug development due to its ubiquitous presence and function throughout life. The biochemical differences in RNA polymerase between prokaryotes and eukaryotes allow for specific drugs that target microbial RNA polymerases without any interaction with our own.

Several antimicrobial drugs function as RNA polymerase inhibitors by blocking bacterial or viral enzyme activity during one stage of transcription. For example, the rifamycins5 are a group of bacterial antibiotics that inhibit elongation by blocking the exit channel of RNA polymerase. These drugs are commonly used to treat challenging infections caused by leprosy and tuberculosis.

Jonathan Dornell, PhD
More from this author >
Advertisement
Chosen for you
Infographic