Complete the form below and we will email you a PDF version of "Sculpting Never-ending Art Using Nature’s Natural Tools, Proteins"

Life is made from building blocks: small structures are collected, arranged and assembled into larger structures. The biological molecules comprising these structures work in tandem to serve a specific physiological function. Proteins are a classic example of such building blocks. Fibrous proteins such as keratins, collagens and elastins are built up from their individual components to form structures such as tendons, muscle fibers and bones. This is the natural course of biology – the instructions for assembly are organic.

What happens when it is no longer nature guiding the building blocks, but rather, scientists?

As a new Nature Chemistry publication shows, the borders of science and art become blurred.1 Led by Sagar D. Khare, an associate professor in the Department of Chemistry and Chemical Biology in the School of Arts and Sciences, researchers have developed a framework for engineering existing proteins into fractal shapes.

What is a fractal?

A fractal is a never-ending pattern. They are created by repeating a simple process over and over in an ongoing feedback loop resulting in infinitely complex patterns.2

Fractals are ubiquitous in nature

If you've ever eaten a pineapple, taken a walk in the woods and encountered a tree (hopefully), or had a snowflake fall on the palm of your hand, then you will be familiar with the fact that fractals naturally exist all around us. 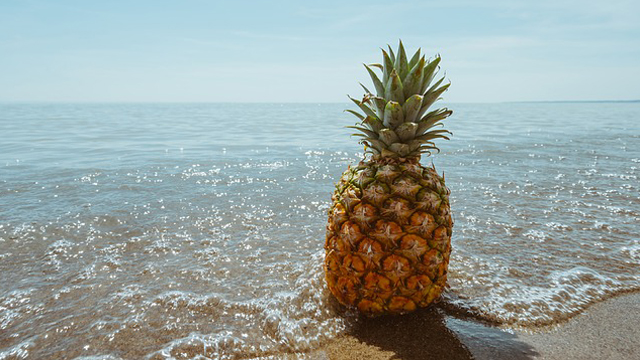 The pineapple fruit, native of southern Brazil, is a fractal. Credit: Pixabay.

What you may not know, is that certain fractals serve important biological functions. "They provide key functional advantages to objects that have these shapes. For example, our lungs (which are fractal) have a surface area the size of a tennis court (100 m2) in a volume of 6 L, and this enables efficient exchange of gases (a kind of filtration)," says Khare.

Speaking of Khare and team's work in their Nature article "Biomaterials in non-integer dimensions" Young and Fraser claim: "The principles of fractal assembly have recently been encoded into DNA and getting proteins to self-assemble with fractal geometry and then do something useful was an obvious next challenge."3

Khare et al. reasoned that creating fractal structures using proteins, at the nanometer-micrometer length scale, would enable these custom-made materials to act as filters. Khare notes: "If we could control the dimensionality of the emergent fractal assembly by making defined changes in the molecular structure, we could potentially develop custom materials for different applications: for example, a filter device may require dense (flower-like) assemblies with controllable density."

But for Khare, it wasn't all about the science: "Creating something beautiful and visually pleasing was also a motivation for me." He elaborates further on the rationale behind the research project in an eloquent blog.

Khare and his team utilized a protein engineering software called Rosetta to design engineered protein components that have a "sticking" property in response to a common biological stimulus: phosphorylation. "This required the design of high interaction affinity and limited (but not zero) conformational flexibility between components. Based on this model we developed new software for simulating how assemblies would look like on the ~100s of nanometer to micrometer scales. So, the design approach used atomic-resolution modeling to inform emergent higher-order structure on longer length scales," Khare explains. 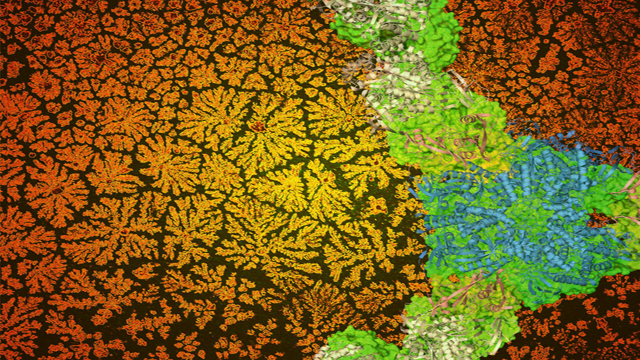 ﻿Flower-shaped biomaterials using engineered protein building blocks. Credit: Nancy Hernandez, William Hansen and Slava Manichev
The researchers chose two enzymes — hexameric AtzA and tetrameric AtzC from the atrazine biodegradation pathway — as the components that would enable multiple branching structures.
They fused a phosphopeptide pY tag to AtzA. They then fused a high-affinity Src homology 2 (SH2) domain, which acts as a binding module for pY, to AtzC. This enabled them to create a response to phosphorylation and the potential for oligomerization.
Young and Fraser comment on the researchers’ choice of phosphorylation as the trigger for reversible assembly and cargo capture: "The selection of a ubiquitous biological signaling mechanism for this purpose anticipates the materials’ potential use in, or interfacing with, living biological systems — a very exciting and imminent possibility!"

The interface of synthetic and biological systems

The techniques used in the research offer promise in the development of novel technologies such as a filter for bioremediation (the process by which herbicides are captured from tainted water). The applications of the work also extend to the medical field, with the potential to create synthetic matrices to study human disease, or for use in tissue engineering.
"We want to pursue design of synthetic matrices with high surface area for immobilizing cells. The hope is that high surface area and biocompatibility of proteins will allow us to display relevant biomolecules (e.g. growth factors, drugs) to better control cell fate in synthetic matrices, which can be important for tissue engineering and bio-printing," Khare notes.
What is next for the team? "In the short term we are hoping to make the method for fractal design more robust by utilizing a variety of building blocks and making materials induced by other stimuli. e.g. building light-controlled assemblies. Light should allow greater control over the kinetics of assembly, and lead to more interesting shapes. In the longer term, we hope to pursue some of the applications mentioned above," Khare tells us.